Midsize SUV will be offered with Smartstream hybrid and plug-in models. 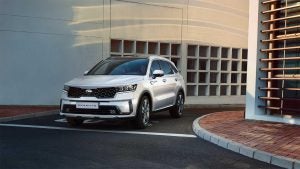 The 2021 Kia Sorento was originally set to debut at this month’s Geneva Motor Show.

Like dozens of other automakers, Kia was left high and dry by the cancellation of the Geneva International Motor Show earlier this month due to the coronavirus pandemic. That left it scrambling to figure out how to launch one of its most important new products this year: the 2021 Kia Sorento.

We’re finally getting a look at the midsize, three-row SUV online and in an extensive news release and what we find is a stylish new makeover of the Sorento that also will bring the ute’s first electrified drivetrain. Or, to be more precise, it’s first two, the 2021 model set to be offered with both conventional hybrid as well as plug-in hybrid options.

Significantly, Kia is following the route we’ve begun seeing other manufacturers follow. Rather than squeeze out every possible mile per gallon, the Korean carmaker has transformed the two Smartstream hybrid systems into the most powerful option a customer can order, punching out a solid 227 horsepower and 258 pound-feet of torque.

Visually, the 2021 Kia Sorento adopts a more aggressive look, picking up some key details, such as the broadened “tiger nose grille” from the recently launched Seltos SUV. Though the roof remains fairly flat, the new Sorento’s greenhouse gives it a sportier, coupe-like appearance. 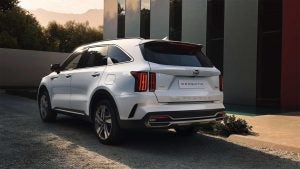 The latest-generation Sorento will be offered in both front and all-wheel-drive configurations.

Overall, the Sorento grows by 10 millimeters in length, the wheelbase stretched 35 mm – most of that devoted to a much roomier interior. Passengers should like the fact that the SUV gains 10 mm in additional width.

The interior, at least based on Kia’s release and images, has moved notably up-market, the automaker claiming it will be one of its most high-quality executions yet. Among other things, the high-tech feel is augmented by the use of a 10.25-inch touchscreen infotainment display on high-trim models which flows into the 12.3-inch reconfigurable digital gauge cluster.

“The Sorento’s evolution over the last 18 years echoes that of the Kia brand as a whole,” said Emilio Herrera, Chief Operating Officer for Kia Motors Europe. “While the (SUV) was initially launched in 2002 as a utilitarian all-terrain vehicle, the fourth-generation Sorento has been transformed into something altogether more desirable. It is an important model for Kia, particularly now that it also represents the first use of electrified power in our flagship SUV.”

(Kia’s aggressive electrification plans could be short-circuited by battery shortages.) 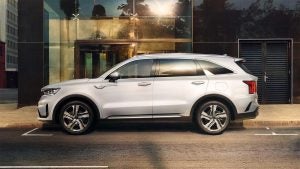 The new Kia Sorento also will be offered with both hybrid and PHEV options.

The information we’ve received about the 2021 Kia Sorento focuses on the European version, so some details likely will be tweaked for the American market. But the roll-out will see a conventional hybrid offered from mid-year launch, with the PHEV version to follow late in 2020.

The Smartstream system pairs a 1.6-liter turbocharged I-4 gas engine with a 42.4 kilowatt electric motor drawing power from a 1.49 kilowatt-hour lithium-ion polymer battery. They push power through an eight-speed double-clutch transmission.

Some details have yet to be revealed. For one thing, whether there’s any significant range for the hybrid in all-electric mode? The size of the PHEV battery pack, along with range, we gather, will be released closer to its launch.

For those who don’t want an electrified drivetrain, the 2021 Kia Sorento will offer a couple internal combustion options in Europe, including a 199-hp 2.2-liter turbodiesel . We’re not expecting that for the U.S. market, but more likely will see the 2.5-liter turbo-gas engine paired with the eight-speed DCT and making 277 hp and 310 lb-ft. 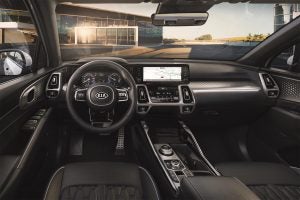 Kia claims the Sorento will get one of its most refined interior packages yet, a big shift from the original SUV’s fire-sale cabin.

Like its sibling brand Hyundai, Kia now makes a range of advanced driver assistance systems standard fare on virtually all products, with still more available as an option. While we’re not yet sure of the way that will play out for the U.S. market, look for the availability of technologies including forward collision warning with automatic emergency braking and pedestrian detection, blind spot monitoring, adaptive cruise with stop-and-go capabilities and more.

The U.S. launch of the 2021 Kia Sorento won’t lag much behind the European debut. With the New York International Auto Show now pushed back to late summer due to the coronavirus epidemic, it’s not clear when or where we’ll see the American debut, though that could now happen at the North American International Auto Show in Detroit which, at least for the moment, is still scheduled to take place in June.

While European versions of the SUV will come from Kia’s Korean manufacturing base, the U.S. SUV will be produced at its plant in Georgia.