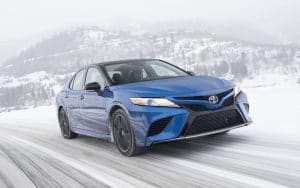 The Toyota Camry is one of several passenger cars the automaker will now offer with AWD.

The Toyota Camry is one of the most familiar, and respected, pieces of automotive hardware found out on the road today.

It has delivered comfortable, reliable transportation to countless American during the past two decades and Toyota executives are promising it will keep on selling the Camry. However, to slow the drift towards sport-utility vehicles, Toyota now plans to bring a Camry equipped with all-wheel-drive system to customers all across the United States.

The justification, according to Toyota, is relatively simple – the company’s customers in North America have asked for all-wheel drive and the Toyota Motor North America staff down in Plano, Texas, went to bat for them and built the case to make an all-wheel-drive system to the popular Camry.

The all-wheel drive system devised for the Camry fits neatly into the existing car’s packaging without altering its appearance. Nineteen-inch wheels will be standard on the Camry with AWD and the system will not elevate the ground clearance or alter the car’s interior dimensions in anyway, according to the specification handed out during a recent test drive in the mountains of Utah where we got to try out the system.

There is plenty of snow in Utah and Toyota set up a special “off-road” course on the in-Soldier’s Hollow, the former Olympic venue for Nordic skiing, to show off how the new all-wheel-drive system used on Camry to show off its performance. 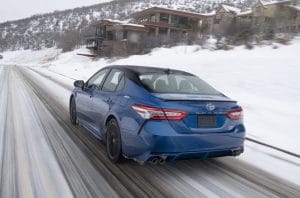 Toyota is looking to make the Camry, once the top-selling car in the U.S., more appealing to buyers with all-wheel drive.

No automaker in its right mind would set up a test like this if it hadn’t already satisfied the car could handle the course.

However, I have to say the Camry with AWD did just fine on the slick snow, moving quickly through the multiple turns on the slalom course. It also climbed a steep snow-covered hill, which kept getting slicker, as the morning wore on, without any hesitation or backward or sideways slip. It held its line through the curves and turns on the snowy surface.

Even when my driving partner decided to turn off the traction control, which is often vital to keeping the car moving, in a proper line, the AWD Camry handled the extra stress.

But we also had a chance to test the system out on the roads around Park City, Utah. Some of the roads were wet, some were dry and some had snow on them, but the Camry with AWD handled the surfaces with little.

In fact, I found that on dry roads the AWD Camry seemed to handle better and steer truer and straighter than the traditional front-wheel-drive version of the Camry. I am sure there are plenty of Camry devotees that also will enjoy the car’s new-found balance and sure-footed performance, which comes with the all-wheel-drive system. The changes are subtle, but they are noticeable. 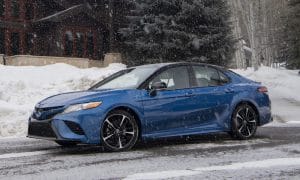 Equipped with all-wheel drive, the 2020 Toyota Camry is ready for rough road conditions.

The system, however, is not meant to make the car into four-wheel, off-roader. However, it probably can handle wet gravel.

Toyota has coupled the all-wheel-drive system with the 2.5-liter, four-cylinder engine rather than the powerful V6, which would have given the car sportier feel in the curves and twisty road. But the automotive world is moving away from the bigger six-cylinder engines and the four-cylinder motor seemed to offer ample power for even at the high altitudes in Utah mountains since it produces 205 horsepower and 185 foot-pounds of torque

The eight-speed transmission on the AWD Camry also did well under demanding conditions, shifting smoothly with any noticeable hitches and three-mode mode switch for eco, normal and sport-mode settings.

The AWD Camry is equipped with LED headlights and taillights, color keyed outside mirrors and dual exhaust.

On the inside the AWD Camry is equipped with heated seats and a heated-steering wheel with paddle shifters. There is also a Bluetooth connection with voice commands and a 10-inch multi-information display and three USB ports and a panoramic sunroof 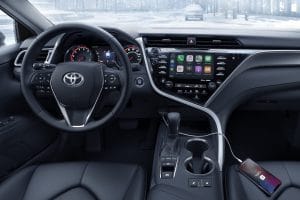 The 2020 Camry is ready to tackle the elements with AWD, and on the inside it comes with the latest tech as well, like Apple CarPlay.

The AWD Camry also is equipped with Toyota’s “safety-sense” system, radar-based cruise control and driver assistance features, head-up display, birds-eye view camera for helping maneuver the car in and out of tight parking spaces are also available on the on the AWD Camry.

Toyota has announced the pricing for the all-wheel-drive system even though the on-sale-date is set for the end of March. But based on the remarks for Toyota officials responsible for the car, my guess is that the all-wheel drive system will add about $1,000 to price of the more traditional Camry with comparable equipment.

Frankly, I was surprised that Toyota had not offered all-wheel drive on the Camry sedan sooner. However, it the AWD system is a welcome addition and I suspect that many of the Camry’s loyal fans also will find it a welcome addition to a car that a long-established reputation for reliability and durability.