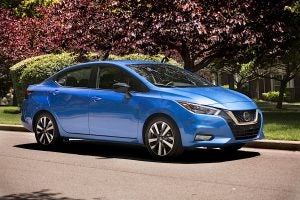 The 2020 Nissan Versa gives the automaker a competitive entry in the subcompact segment.

The popularity of trucks and sport-utility vehicles have trimmed the sales of subcompact cars and causing some carmakers to flee the segment.

But the subcompact segment is not dead yet and Nissan has put a bit of a spark in it with the introduction of the 2020 Nissan Versa, a small sedan quite capable of filling a number of roles.

The vast majority of Americans drive themselves to work and the 2020 Versa can serve as an efficient vehicle for commuting, especially for longer journeys where fuel economy is an issue. It’s also useful for everyday errands in urban and suburban neighborhoods where parking is tight and at a premium.

The Versa also can fit nicely into urban parking spaces on the street or in crammed parking lots.

The 2020 Versa also comes with driver assistance technology, a good sound system and an interior that has been upgraded, with bright work to highlight interior elements and handsome stitching to set off the soft material used on the dashboard.

In addition, there elements such as a door plate and puddle lights that are usually found on more expensive cars. 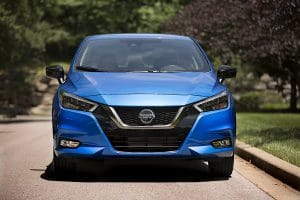 The 2020 Versa is powered by a 1.6-liter 4-cylinder engine is rated at 122-horsepower and 114 foot-pounds of torque. It also gets 32 miles per gallon in city driving and 40 mpg on the highway for a combined rating of 35 mpg. But I found, while checking the fuel-economy gauge in the Versa, I was getting 39 mpg in combined city and highway driving.

The 2020 Nissan Versa also handled nicely. It had a solid steering feel and brakes and delivered a good steady ride on what I felt to be a solid suspension. However, road and tire noise did filter into the Versa’s cabin.

In the car I drove the 1.6-liter engine was paired with an enhanced Xtronic CVT transmission. In my experience, CVTs don’t exactly have a robust fan base, but I found the transmission in the Versa shifted smoothly are fairly precisely with little or no drama.

However, Nissan, surprisingly, is making 5-speed manual is available on the Versa. Fuel economy with the 5-speed manual transmission is rated at 27 mpg city, 35 mpg highway and a combined rating of 30 mpg, which is significantly less than the CVT-equipped Versa.

Nissan designers have taken advantage of the car’s transverse-mounted engine to create an eye-pleasing design. Long hoods are often favored by automotive designers because they can help create nicely balanced proportions. But the Versa thanks to stubby engine compartment and slopping, floating roof has a line that flows effortlessly from front to back, giving the vehicle a singular appearance either from the three quarter or profile view. 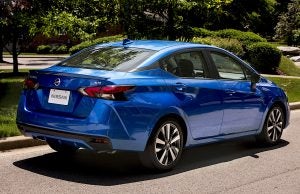 The Versa gets 32 miles per gallon in city driving and 40 mpg on the highway for a combined rating of 35 mpg.

Throughout the years, Nissan has developed a reputation for developing exterior designs with an emotional appeal and the 2020 Versa, which also is lower, longer and wider than its predecessor, carries on the tradition. The new exterior lines of the Versa also fit nicely with a re-interpretation of Nissan’s distinctive front grille and the boomerang shape headlamps and taillights.

Nissan also dresses up the Versa a bit. The Versa SR, for example, comes with 17-inch aluminum-alloy wheels with 205/50R17 all-season tires, LED headlights, fog lights and also can be ordered with heated front seats and Intelligent Cruise Control.

Nissan also has integrated an impressive list of new technology into the 2020 Versa such as a standard Bluetooth hands-free phone system and streaming audio and with steering wheel controls. A rear-view monitor, Siri Eyes Free, AM/FM audio system with four speakers and USB connection port for iPod and other compatible devices, and hands-free text messaging assistant are also available. 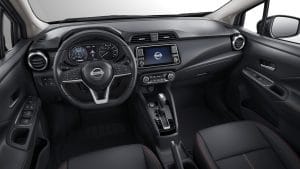 The Versa I drove was equipped with the full package of a driver assistance features and overall, I found they were nicely adapted to the car. I know a lot of drivers find ADAS features annoying, but I found the technology on the Versa unobtrusive and helpful rather than jarring.

There is now such thing as an inexpensive new car. But the manufacturers suggested retail price for the “loaded” 2020 Versa that I drove was quite reasonable at $21,490, which included the $895 destination charge.

(Nissan reveals 2020 Frontier in Chicago – but it only hints at the complete makeover coming.)

Small cars have some obvious drawbacks, but Nissan has done a very nice job in enhancing the overall appeal of the 2020 Versa.