New trucks are best mix of brawn and brains. 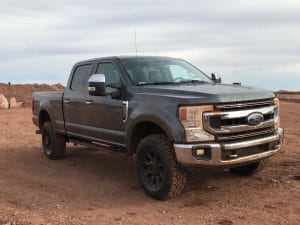 The 2020 Ford F-250 XLT Tremor offers all of the workhorse traits Super Dutys are know for with excellent off-road capability.

Every year, Ford sells hundreds of thousands of F-Series Super Duty pickups to people like contractors, farmers, etc. who not only buy them because they can pull a small house up a hill, but more so lately because they like how they look.

They’ve come to depend upon reliable performance from these behemoths, and pay big money – BIG money – to ensure whether its gas or diesel, they can haul, tow, carry or push whatever they need. In fact, no company sells more full-size pickups than Ford does with its F-Series.

For 2020, Ford has once again delivered a Super Duty that is stylish outside and in with powerplants that offer class-leading performance. Again, need to tow a barn, get an F-350. Fortunately for TheDetroitBureau, I recently got to put the line-up of Super Dutys through their paces in a variety of environments in Arizona.

Now, in the interest of full disclosure, I’ve previously owned an F-350 so I’ve had some experience with these beasts. Mind you it was a 1999 XLT with a 7.3-liter Power Stroke diesel, but it was just a few years ago that it was my everyday driver. So not exactly the same as today’s much more sophisticated offerings, but that made seeing how far the 2020 model has come during that time just that much more impressive.

Ford has taken things a step further with the latest generation of the Super Duty, traditionally offering two powerplants for the truck: one gas, one diesel. However, this year a new 7.3-liter V8 gasser putting out 430 horsepower and 475 foot-pounds of torque – both best in class, as Ford is quick to remind – to its existing line-up. 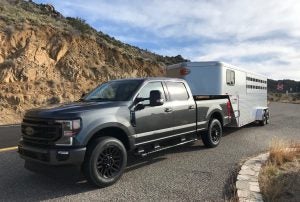 The new Ford Super Duty is capable of towing as much as 37,000 pounds when configured correctly.

For those who want to know what “anything” could weigh, the payload capacity tops out at 7,850 pounds while the maximum gooseneck capacity is 37,000 pounds and the fifth-wheel towing capacity hits 32,500 pounds — which is a fifth-wheel with room for a family of five and an in-law or two perhaps.

After spending a hour behind the wheel in an F-350 Platinum powered by the aforementioned new 7.3-liter gasser mated to a 10-speed automatic transmission, I can tell you that it’s a pleasant place to be. Sometimes being high up can make a truck feel a little top heavy and slightly unstable; however, the new model was nothing but sure-footed and responsive.

The new transmission was certainly more than up to the task of “hauling” around me and my driving partner and smooth shifts and steady acceleration meant no spilling of my precious morning coffee due to the occasional jerk of a transmission shift.

However, that combination was even more impressive while towing. Ford offered a chance to pull a variety of trailers, campers and other multi-thousand-pound towables on a scenic drive through the mountains just outside of Phoenix. 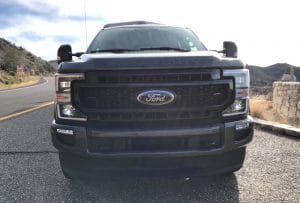 The new 2020 Ford Super Duty gets an exterior update, including a massive and sturdy-looking front grille.

Not only did the 7.3-liter handle the extra weight with aplomb the secure handling remained in place even navigating some narrow switchbacks with tight turns. The truck simply plowed through as if it was on a leisurely Sunday jaunt.

While its towing capability is well-known – and impressive – it was the truck’s off-road capabilities that stunned me the most. Typically, the Super Duty is what one uses to tow your off-roader to whatever rocks that need to be climbed, rivers to be forded, etc. That is no longer the case.

Ford’s Tremor off-road package is quite simply jaw-dropping. I have to confess, I don’t do much off-roading, but I’ve been a time or two on closed courses – including a run in a Humvee on a military-style set-up – and if you’ve got the Tremor package, you can go anywhere, or at least it feels like it.

(Ford plowing ahead this winter with new kit for Super Duty)

The Tremor package, which is available on XLT, Lariat, King Ranch and Platinum models of the F-250 and F-350 for the 7.3-liter gas and 6.7-liter Power Stroke, and it includes:

Naturally, Ford let us try that out too — on a course set up in an active rock quarry in the Arizona desert that looked the background for the movie “The Martian.” With massive rocks to traverse, steep inclines and declines to navigate and, of course, a 33-inch deep moat to ford, it was Ford’s marriage of brawn and brains that made it all happen without event. 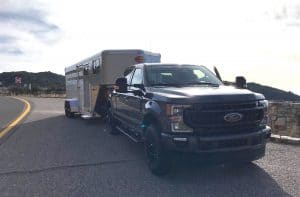 The new Super Duty comes with three different powerplant choices two gas and one diesel, including a new 7.3-liter gasser.

Hopping into an F-250 XLT with the Tremor package, the first obstacle to face was lengthy run of large rocks. No problem, activate trail control and put it in rock crawl mode. Set the speed you feel comfortable and simply focus on pointing the nose in the direction it should go.

I should mention at this point, the truck features a 360-degree camera that allows the driver to all around the truck, helping to ensure avoidance of the “wrong” rock. Plus, the Super Duty enjoys impressive approach (31.65 degrees) and departure (24.51 degrees) angles that make trekking around the most severe terrain a much simpler experience — almost off-roading for dummies, or at least this dummy.

It also scaled two 30-degree grade hills of red clay like Spider-Man up the side of a building. The difference being Peter Parker isn’t 7,000 pounds. The truck’s capability belies its appearance and one can almost forget that you’re in a large, heavy-duty vehicle when it performs like this. To be clear, it’s not necessarily what you’ll take on the toughest layouts, but you might think about it.

What I was personally looking forward to was comparing the new 6.7-liter Power Stroke to my experience with the old one. I thought the 7.3-liter was an impressive powerplant, especially since I often putted around town in it. The new diesel is so much more impressive. An hourlong drive back to our starting point gave me plenty of time to put it through its paces and it was more than up to challenge. Stomping on the pedal brought a smile to my face and even pushed me back in my seat a little. 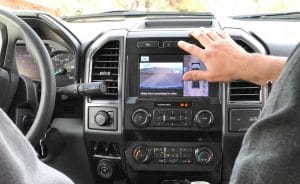 The new Super Duty offers a slew of helpful technology, including a 360-degree camera.

The other difference between “the ol’ behemoth” and current model is the interior. The cab is basically like that of an F-150 and features a slew of technology designed to make your ride comfortable, sale and connected.

The Super Duty features now include Pro Trailer Backup Assist. Previously available only in the F-150, it lets the driver back up a trailer or boat easily with backup camera and a dial. Turn the dial the direction you want your towable to go, let off the brake and watch the screen so you can make adjustments. So simple. So quick.

The truck’s safety features include lane-keeping alert, blind-spot alert with trailer coverage, automatic front braking and pedestrian detection to start. Creature comforts include 4G LE modem and Wi-Fi, which can be tapped into with a 10-foot radius of the truck as well as USB-A and C ports.

The F-Series Super Duty is an intoxicating mix of brains, brawn and comfort. And anything that gets that kind of endorsement certainly comes with a hefty price tag. The trucks come in six trim levels: XL, XLT, Lariat, King Ranch, Platinum and Limited. Those are for the F-250, 350 and 450.

The F-250 XL starts at $33,705, plus a $1,595 destination and delivery fee. For big spenders looking for a vehicle that will last a couple decades probably (mine has), the F-450 Platinum starts at $90,530 with the same additional fee. For most folks, the F-250 XLT with either the 7.3-liter gasser or 6.7-liter Power Stroke and a few other options will be plenty of truck and give you a chance to keep the final price under $50,000, a pretty good deal for that kind of vehicle I’d say.