Expect to see Z06, ZR1 and other familiar badges live-on, too. 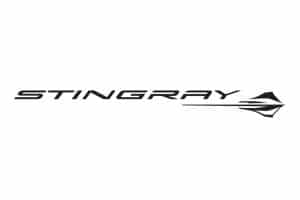 We’ll got our first official look at the all-new, mid-engine Corvette later this week but Chevrolet is already dropping hints about what we’ll learn when the first-ever mid-engine sports car makes its debut during a California news conference.

For one thing, the first of what will likely be an array of C8 variants will revive the name Stingray. Though that badge has only been used twice before, it’s arguably the best-known version of the Vette. As with the current, seventh-generation, or C7 Corvettes, we’re expecting to see Chevy also bring back the Z06, ZR1 and other badges as it rolls out ever more powerful versions of the new two-seater.

In a news release, Chevrolet points out that “the second generation Corvette debuted as a Sting Ray in 1963.” But that, it turns out, doesn’t really tell the full story of the distinctive name.

(The upcoming debut of the new C8 Corvette has stalled sales of the outgoing model. Click Here for the story.)

The very first Corvette Stingray was actually a concept vehicle and more formally known as the XP-87. It was revealed in 1959 and based on an aborted race car project from two years early led by Zora Arkus-Duntov, the “father” of the Corvette. The original car was to serve as Chevy’s entrant into the 24 Hours of Le Mans but never made it to the starting grid. At a mere 2,200 pounds, the Stingray concept was nearly 1,000 pounds lighter than the fiberglass-bodied production model of the era. 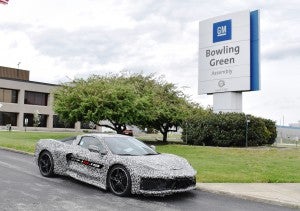 The C8 will continue to be built at Chevy’s plant in Bowling Green, Kentucky.

Not only did the XP-87 concept tease what was to come when the Vette was redesigned for the 1963 model-year, but it also served as a test bed for a number of technical upgrades, including a four-speed transmission.

The single-seater went racing in 1959 and won the SCCA National Championship a year later before retiring from motor sports. Bill Mitchell, the legendary GM design chief, added a second seat to the Stingray and sent it on the show circuit. It even appeared in the Elvis Presley film, “Clambake,” in 1967.

The Stingray name finally showed up on the production Corvette when the second-generation model rolled out in 1963, the first year adopting the split rear window design that has become a favorite for collectors. Stingray badges remained in use until the end of the C2 run in 1967, returning for the launch of the C3 a year later. But the badge was retired in 1976, despite the fact that Corvette fans routinely used the name almost interchangeably for subsequent versions.

It wasn’t until 2014 with the debut of the C7 that Stingray returned as an official badge for the “base” version of the Corvette, if that’s a term that properly applied to a sports car making 450 horsepower that was instantly recognized as the most world-class version of the Vette ever to go into production.

Since the C7’s debut, of course, Chevy has launched an assortment of upgrades bringing back names like Z06 and ZR1.

We can expect that to happen during the C8’s lifecycle, Chevy sources have confirmed, but the first model will again be dubbed Stingray. 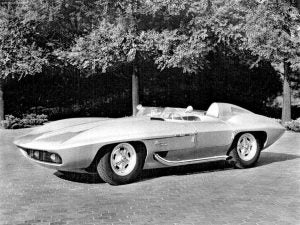 The Stingray name first appeared on this 1959 concept also known as the XP-87.

It will mark the first time that a production Corvette will opt for a mid-engine design, a layout that Arkus-Duntov had hoped to bring to market more than half a century ago. Over the decades, in fact, there have been any number of prototypes, none getting the final nod from parent General Motors.

Expect the initial version to punch out somewhere in the neighborhood of 500 horsepower, likely a bit more than the current entry version.

At the top end, speculation has it that Chevy will be bringing out a serious Ferrari fighter dubbed the Zora, in honor of Duntov-Arkus. Like the Italian supercar maker it is rumored to be lifting a few tricks from Formula One racing. The Corvette Zora is expected to pair a twin-turbo V-8 pumping torque to the back wheels with an electric motor up front, the package making more than 1,000 horsepower.

Chevy is still expected to keep a lid on pricing, however, which could prove a real advantage if it can convince import supercar fans that the C8 is a truly world-class competitor. We’ll learn more on July 18th.