No plans for the U.S. – but could that change? 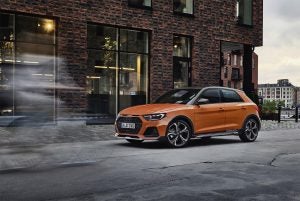 Utility vehicles have all but taken over the U.S. market, and they’re gaining traction in Europe and other parts of the world, as well.

While that’s led some manufacturers to pull out of the sedan and coupe segments – think Ford, for one – others are trying to find a suitable blend that can offer buyers the best of both worlds.

That’s where the new Audi A1 CityCarver comes in. Sharing the underpinnings of the A1 Sportback might be thought of as a downsized version of the automaker’s bigger Allroad model, here targeted at young millennials who seem more open to explore their options, rather than just signing on for another me-too SUV.

While it shares a fair bit with the Sportback hatchback, but there are also some notable differences. To start with, there’s a unique version of the familiar Audi Singleframe grille, and some more CUV-like black cladding on both the rocker panels and wheel arches.

The CityCarver also boasts “around four centimeters (2.0 in) more ground clearance thanks to higher ride height and larger wheels,” notes an Audi news release,  and the roof stands two inches taller than the Sportback’s. 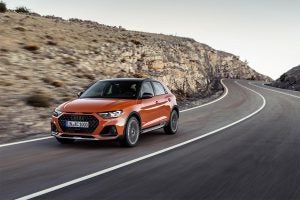 Powertrain details haven’t been released but the CityCarver appears to be front-wheel-drive only.

Though that cladding and taller stance might suggest the CityCarver is ready for some rugged off-roading, it appears those details are mostly meant to enhance its appearance. Unlike the Audi Allroad, this is a front-wheel-drive only model, with no Quattro option, it appears – though the German automaker has not yet released specific powertrain details. But we’d be surprised if it doesn’t share a version of the Sportback’s 1.4-liter turbo-four which in that A1 package makes 200 horsepower. There’s also a 95-hp three-cylinder engine available which could show up as a base package.

The German automaker does say that “optional sporty suspension tuning will be available with the Dynamic Package – which also gets sporty red brake calipers, a “sound actuator,” and an adjustable damping system.

The reality is told by the name: the A1 CityCarver will serve as an entry-level package for the Audi brand and largely target young, urban residents who need something both small and nimble, as well as affordable – and who don’t want to get stuck in chunky little city cars like the Smart fortwo or Renault Twingo.

(Are July car sales up or down? Yes. Or so it seems, as analysts debate the preliminary numbers. Click Here for more.) 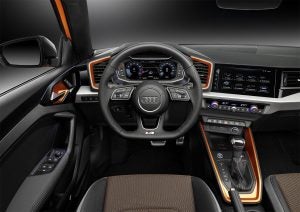 The CityCarver will be offered with a variety of color options to accent the interior.

As you’d expect, that audience will demand plenty of technology and, Audi says, it will deliver with features “such as navigation with Google Earth, traffic information online, parking information, hybrid radio and a Wi-Fi hotspot for mobile devices with Audi connect navigation & infotainment, which is included in MMI navigation plus, and the supplemental plus package.” There’s also a reconfigurable gauge cluster, a 10.1-inch touchscreen, the Audi MMI controller and an optional, 560-watt Bang & Olufsen 3D Premium Sound System.

The cabin is offered with plenty of customizable options, including mint, copper, orange or silver accents. And there’s a reasonable, 12.5 cubic feet of storage space.

Pricing hasn’t been announced and likely won’t be until closer to the A1 CityCarver’s on-sale date this coming autumn, but the Audi A11 Sportback starts at 29,650 euros in Germany – or about $33,054 in the U.S.

For now, Audi has no intention of bringing any of the A1 models to the U.S. But could that change?

A recent study conducted for Nissan found a majority of American millennials who currently don’t own a sedan saying they would consider one for the future, and some industry analysts believe there’d be even more interest in vehicles that can find the right blend of sedan and SUV. So, we’ll be watching to see if Audi might try to give the CityCarver a shot on this side of the Atlantic at some point in the coming years.

(Take a first drive of the all-electric Audi e-tron. Click Here for our review.)