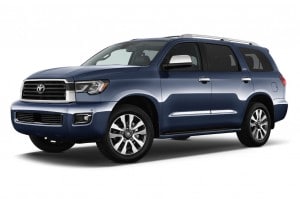 The 2019 Toyota Sequoia features a more refined ride than its predecessors on the traditional frame.

The Toyota Sequoia has been around for a while now, but the automaker continues to change the vehicle enough to keep it interesting for both loyal fans of the buyers and new buyers, looking for a big vehicle capable of hauling people and their stuff.

The Sequoia is built with an old-school body-on-frame construction. In years past, body-and-frame sport utility vehicles had a tendency to roll and pitch in a way that could leave even experienced sailors a bit sea sick.

But there is none of that with 2019 Sequoia, which has been nicely tamed with a series of engineering tweaks that give the big SUV a stable, comfortable foundation for towing, driving off the pavement and everyday motoring on the vehicle’s 122-inch wheelbase.

The Sequoia’s four-wheel, independent suspension, with the help of the specially fitted Bilstein shocks, manages to absorb the bumps on the road and deliver well-modulated wheel articulation off-road. Road handling performance is enhanced further by front and rear anti-sway bars.

Overall, I found the ride and handling of Sequoia to be a quite pleasant surprise when I climbed behind the wheel. The ride was smooth a pleasant under all kinds of roads and driving situations.

(Toyota will rely on single platform for pickup trucks. Click Here for the story.)

The independent rear suspension also makes was designed allowing for the third row’s roominess, which offers adult-size legroom. Second-row legroom is full-size sedan-like at 40.9 inches. Even with its capaciousness, the Sequoia immediately gives the impression of driving “smaller than it is” thanks to its supple ride and 38.1-ft. turning diameter and the power steering set up, which makes it easy to handle the steering wheel. 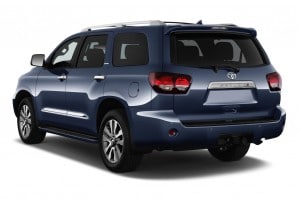 The Sequoia features room for eight and a slew of new safety technology.

The Sequoia’s 5.7-liter V8 engine, which produces 381 horsepower at 5,600 rpm and 401 lb.-ft. of torque, is equipped with dual independent variable valve timing with intelligence and an acoustic control induction system that ensures torque is available across the engine’s entire speed range. A 6-speed electronically controlled automatic transmission and four-wheel drive, which enhances the vehicles ability to travel back roads.

In addition, lockable Torsen limited-slip center differential apportions torque to the front and rear wheels, and a two-speed transfer case provides a lower range for steeper off-road trails. The low range is accessible via a rotary knob, while the center differential locks at the push of a button. Fuel economy isn’t great – the combined EPA rating is 14 miles per gallon, including 17 miles per gallon on the highway.

The Sequoia cabin, which can seat up to eight passengers, is roomy, quiet and quite comfortable on the longer drivers for which the vehicle seemed to be designed. The overall design and exterior features have been shaped to minimize wind noise and helping ease the stresses that come with driving even on sparsely traveled roads.

Wide-opening rear doors ease passenger ingress/egress and child seat installation. When folding the second- and third-row seats flat, the Sequoia can swallow up to 120.1 cubic feet of whatever needs carrying – even objects up to 11 feet long, provided the maximum weight is not exceeded. Extra-large cup/bottle holders outnumber passengers two to one, and the Platinum grade adds two more for good measure.

(Click Here for more about Toyota’s $2.8B plan to create a company to build autonomous vehicles.)

Other features such as keyless entry and adjustable driver seat are also available as part of the package. 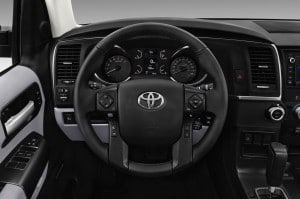 The Sequoia offers the driver a clean, clear analog set of gauges to read.

The price for the Sequoia starts at $54,640 but the destination charge and optional equipment on the vehicle I drove pushed the price up to nearly $60,000.

But the Sequoia is a big-rugged vehicle that carry a big combination of people and their gear, making it ideal for large busy families that have places to go and things to do.