Power, handling, performance, new Shelby GT350 has it all. 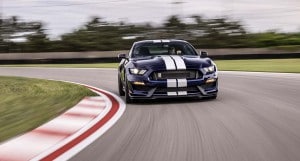 By this late in May, it should be getting warm in Detroit, but despite the 50-degree chill and a depressingly leaden sky, at least the rain has held off as I strap on a HANS Device and helmet and head out to pit row at Pontiac’s M1 Concourse, where a 2019 Ford Mustang Shelby GT350 is waiting for me.

On the way, I pass a vintage version of the car, one of just a handful of original 1965 models that survive. It might look dated, but when it made its debut back in 1965 it transformed Ford’s little pony car into a wicked contender. With its tiny tires and live rear axle, it was a handful to drive but nonetheless raised the muscle car bar to new heights.

Today, the GT350 takes a back seat to the Shelby GT500, an all-new version of the 700-plus-horsepower monster set to roll out later this year. But for those who don’t need to go to the ultimate extremes – or who simply don’t have quite a large enough bank account, the latest update of the GT350 that rolled out in 2016 has plenty to offer.

“Continuous improvement,” summarizes Mustang Chief Engineer Carl Widmann. And a closer inspection reveals that applies to a lot of things, starting with the GT350’s body. 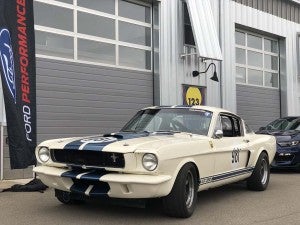 (Ford muscles up its “entry-level” Mustang. Click Here for the story.)

When the Shelby team, known to aficionados as “the Venice Crew,” worked on the ’65 model, there wasn’t much known about aerodynamics. These days, it’s about as important as what goes under the hood, though it does pose some severe challenges. When Widmann’s team got to work they wanted to decrease drag to make the 2019 go faster, even while increasing downforce to ensure the car stays glued to the pavement. Virtually everything about the GT350’s body has been optimized to achieve one of those goals or the other – and, occasionally, both. 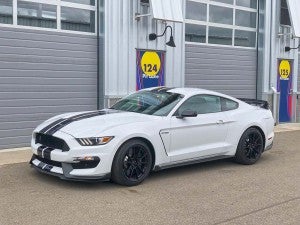 The new Shelby GT350 in the pits at the M1 Concourse in Michigan.

That starts with the complex front spoiler designed to reduce turbulence under the vehicle, and even the mask behind the front grille that sharply cuts back on lift. The 2019 version of the GT350 gets a new wing. While smaller than the one on the upcoming GT500, it still plays a significant role when you start approaching triple-digit speeds. And, for $850, a buyer can add the optional Gurney flap to make the wing even more effective.

The GT350’s suspension has also been announced with stiffer springs up front and, somewhat surprisingly, slightly softer rear springs. There’s a beefier rear anti-roll bar, too. And the $850 wing upgrade also gets you optional camber plates.

One of the most significant changes that came with the latest-generation Mustang was the switch to an independent rear suspension. But performance versions, starting with the GT, now have the added benefit of using MagneRide shocks. These are based around magnetorheological dampers. 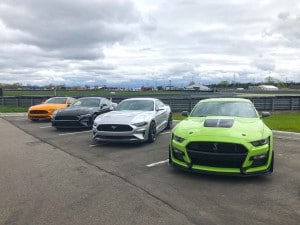 The Mustang Performance line-up is ready to roll.

At their most basic, these use a special fluid with microscopic particles sensitive to magnetic current. That allows each damper to individually be varied from soft to rock solid in the time it takes to travel two inches at 60 mph. The dampers and software controls, like the overall suspension tuning, have been updated for 2019.

Then there’s the GT350’s beating heart. In 2019 trim, the 5.2-liter DOHC 32-valve V-8 makes an impressive, if not benchmark, 429 horsepower and 429 pound-feet of torque. Better yet, torque comes on almost instantly, as I discover as I release the clutch on the Shelby’s six-speed Tremec manual gearbox and launch onto the 1.5-mile M1 track. And it keeps coming on almost all the way up to the coupe’s 8,250 RPM redline.

It’s a technical course, with corners that demand you set yourself up precisely, and straights that are equally demanding of your car’s brakes.

The grille and spoiler on the new Ford Mustang Shelby GT350.

(Click Here for more about the “electrified Mustang” coming in the near future.)

For this run, I have switched to “Track” mode, reducing but not eliminating the role of nanny systems like electronic stability control. But if they’re kicking in as I take my first lap, misjudging the apex and exit of a couple corners, you wouldn’t know it. The old Venice Crew would likely be shocked at how responsive and precise the new GT350’s steering is, and how forgiving the coupe can be if you find yourself missing the ideal line.

Lap after lap I find my groove, setting the car up more accurately while also pushing harder into each corner.  Of course, it helps to have a massive set of Brembo brakes to scrub off excess speed. Combined with the upgraded suspension, there’s never a sense of the tail trying to come loose as you launch into a corner. 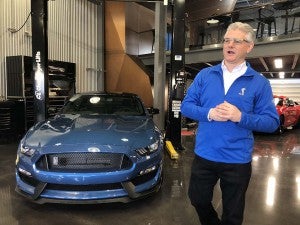 If the 2019 Shelby GT350’s track manners weren’t impressive enough, Widmann’s team has understood a fact that so many other sports and muscle car engineers miss: with rare exception, these vehicles will spend most of their lives on public roads. And this near-ultimate Mustang shows equal aplomb on the street – even the deeply potholed pavement in Michigan. It helps to have well-bolstered Recaro seats to keep you in place when you’re piloting the Shelby in anger, and to soak up bumps when you’re cruising the highway.

There are other concessions to everyday life, including the latest Ford Sync-based infotainment system with useful additions like Apple CarPlay and an 8-inch touchscreen, as well as dual climate control. 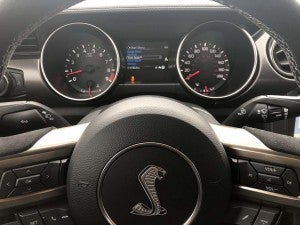 This snake puts out 700-plus horsepower.

There’s also a switch on the center console that, if you really must, lets you tame that beautiful roar from the V-8. But we bet few owners will ever make the switch.

For the package, expect to invest $60,235 before delivery fees and such useful add-ons as the Gurney flap. It’s a significant premium over the Mustang GT but, for those who will have the opportunity to do some track time, it seems a logical step up. The 2019 Mustang Shelby GT350 might be a step down from the ultimate GT500 coming later this year, or even the track-oriented GT350R, but it’s a heck of a package for the money.