The mid-engine Chevrolet Corvette is finally out in the open and set for a formal July reveal.

To misappropriate a quote by Humphrey Bogart from “The Maltese Falcon,” “It’s the stuff dreams are made of.”

For decades, General Motors has sniffed off rumors that it was developing the sort of mid-engine Chevrolet Corvette that proponents said was needed to turn the classic American sports car into a true world-beater. In recent years, rumors have been rampant, along with sightings of prototypes caught with less and less camouflage. But, time and again, the automaker has refused to comment or commit.

Until now, that is. Late Thursday, GM President Mark Reuss put his official stamp on the clearest image yet of the C8. Specifics are scarce, but for the two most important details. His tweet declared it “The Next Generation Corvette,” and announced that the C8 will make its official debut on July 18, 2019.

(Caught! Click Here to check out these pics of a fleet of C8s caught testing in a snowstorm.) 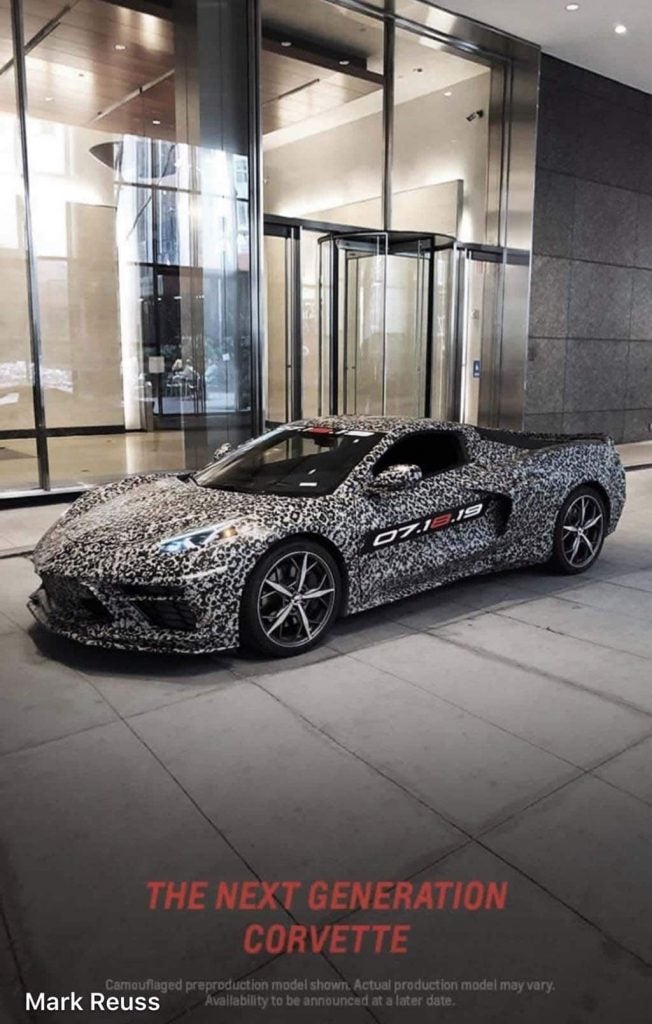 The preview had been expected for some time, many fans disappointed when it turned out the mid-engine Vette didn’t make its first appearance at the North American International Auto Show in Detroit last January. As recently as this week, there was some speculation GM might pull off a surprise unveiling at next week’s New York International Auto Show.

But, as TheDetroitBureau.com reported in February, the automaker is planning a grand, standalone event to mark the historic occasion, deciding not to share the stage with any other manufacturer.

As the worst-kept secret in Detroit, there’ve been a lot of details leaking out about the C8 Corvette in recent months, but the official shot seen here – as long with some recent images caught by video-reviewer Tom Voelk near San Diego – tell us plenty.

There’s a lot of the current C7 model carried over, particularly in the shape of the nose and the rake of the windshield. That said, the shorter nose and longer mid-section provide an immediate giveaway that there’s no longer a big V-8 up front. Large scoops on the side feed plenty of air into the mid-mounted engine and, we’d assume, the rear brakes.

It’s difficult to tell for sure but the large back glass appears to give the world a view of the engine compartment, with a low and wide wing integrated into the tail.

Our sources indicate the initial version of the C8 will pick up the Corvette Stingray badge which was revived with the launch of the C7 model. It’s expected to share the same 6.2-liter pushrod V-8 in the current Stingray, and should make in excess of 500 horsepower. Don Sherman, a man who has made a career out of chasing mid-engine Vette rumors, has suggested it could push closer to 600 hp. 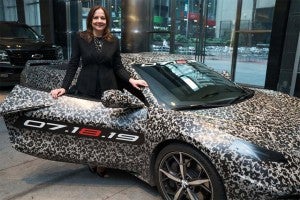 Manual fans could be in for a disappointment, however, as a Tremec seven-speed automatic may be the only transmission available.

No Corvette series would be complete without GM rolling out a series of upgrades, including next-generation versions of the Z06 and ZR1. But it won’t stop there this time.

There has long been speculation that the C8 would carry the official name, Zora, in honor of Zora Arkus-Duntov, the man commonly known as the “father of the Corvette.” More likely, that will be the name of the top-performing version that is expected to follow the same route we’re seeing such European stalwarts as Ferrari and McLaren follow, opting to pair a Formula One-style electric motor on the front axle with a twin-turbo V-8. If that proves accurate it could mark the first-ever production GM factory-built product to top 1,000 – and it would deliver power through all four wheels, a Corvette first. 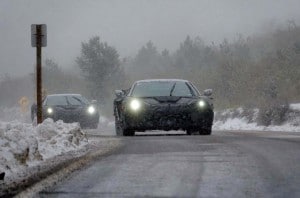 A pair of camo'd C8s caught testing in a snowstorm.

The C8 coupe is expected to be the first version of the mid-engine model to come to market. Beyond that? The rumor mill continues to debate whether we will next see a convertible or a targa edition.

Word has it the C8 Stingray will hit showrooms before the end of 2019 at around $62,000 to start, or about $5,000 more than the base C7 edition. By the time a Zora edition were to come out we’d expect to see the price tag double. That would be a significant jump, even for those familiar with the current C7 ZR1. That said, it would still come as a bargain compared to most of its global competitors.

We expect to learn a lot more about GM’s plans in a little more than three months.