Mercedes-Benz Concept EQV is a Near Production-Ready Electric Minivan 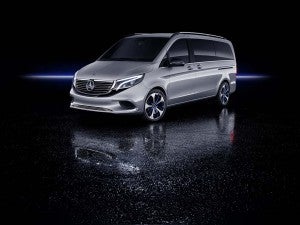 The Mercedes Concept EQV combines elements of the V-Class van and the new EQ series.

The Chrysler Pacifica has shown there’s a market for electrified people-movers. Now, Mercedes-Benz is taking things a step further with its Concept EQV.

The all-electric version of its V-Class  is making its debut at this week’s Geneva Motor Show, but a production version of what’s also known as the Mercedes Viano is set to follow next autumn at the Frankfurt Motor Show, the automaker confirmed on Tuesday.

“Mercedes-Benz Vans is consistently advancing the electrification of its product portfolio,” said Wilfried Porth, a board member with Mercedes’ parent Daimler AG. “With the Concept EQV, we are now taking the next step. From a daily driver for the family, a leisure-time adventurer or a shuttle vehicle with lounge ambience, the combination of these characteristics with a battery-electric drive mean the Concept EQV is a concept car with a future.”

When it goes into production next year, the EQV will join a fast-growing list of all-electric Mercedes models that will include the subcompact EQA and compact EQC. The automaker plans to offer electrified versions of the entire range of its product portfolio by 2022. 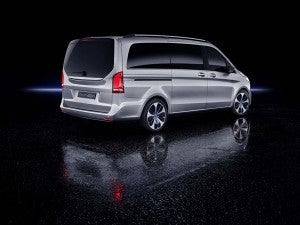 In concept form, the EQV can be configured as either a seven or eight-seater.

It is powered by a 100 kilowatt-hour lithium-ion battery pack that, the automaker says, will provide a maximum range of about 249 miles. That’s using the European driving cycle, so an American version would likely come in lower.

The automaker claims the EQV will be able to use a quick charger to add 62 additional miles in just 15 minutes. Charging times using a conventional Level 2 240-volt charger weren’t released but similarly sized battery packs on products like a Tesla Model X SUV normally requite more than 10 hours when completely drained.

To help maximize range, a motorist will be able to pre-condition the cabin while the EQV is plugged into the grid by using a smartphone app.

The minivan is motivated by a single electric motor on the front axle making 201 horsepower. The compact drivetrain combines the motor with a single-speed transmission. Top speed is rated at 99 mph.

(More than a mid-cycle refresh: A first look at the new GLC. Click Here for the story.) 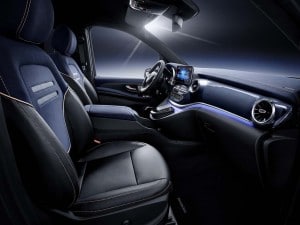 The Concept EQV can be outfitted with seven or eight seats and features MBUX voice assistant.

The Concept EQV is painted high-tech silver, and the nose of the van combines the familiar V-Series design with cues found on other Mercedes-EQ models. That includes a radiator grille with chrome inserts and an LED band.

As for the cabin, “the cool aesthetics of the exterior continue, being complemented by warm accents, like those in rose gold, which underline the whole ‘Welcome Home effect,’” said Gorden Wagener, Chief Design Officer at Daimler AG. “The focus in the cockpit of our Concept EQV is on the new and intuitive MBUX system.”

(Click Here to learn how Mercedes is leading in U.S. luxury car sales.)