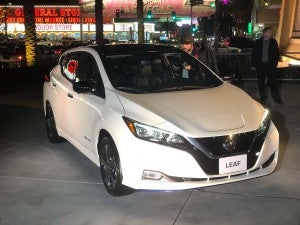 It’s been the world’s best-selling battery-vehicle since its introduction nearly a decade ago, but the Nissan Leaf had been losing ground as competitors like Tesla have rolled out an array of new competitors.

Now, the Japanese automaker is aiming to regain momentum with the introduction of a critical update to the battery-electric vehicle, the new Nissan Leaf Plus set to increase both range and performance by about 50 percent. That will position the five-door model, to be sold as the Leaf e+ in most other markets, as the latest BEV to top the 200-mile mark.

“This is a big psychological barrier,” said Denis LeVot, the CEO of Nissan North America, during the debut of the Leaf Plus at the Consumer Electronics Show in Las Vegas. Along with the improvement to Leaf’s traditionally anemic performance, he added, that should prove to potential buyers that “these are more than real cars.”

(Infiniti aims to electrify with concept coming to Detroit Auto Show next week. Click Here for a sneak peek.)

When Leaf debuted in 2010 it was outfitted with a mere 24 kilowatt-hour battery that, according to the EPA, delivered an estimated 73 miles per charge. By the end of the life of the first-generation hatchback that had increased to around 100 miles and, with the launch of a gen-2 model in 2017, that again climbed to as much as 150 miles per charge. 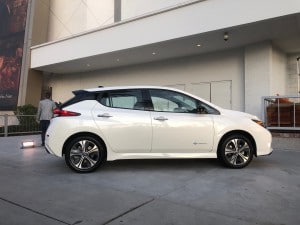 The design of the Leaf Plus is unchanged from the base, 2nd-generation BEV launched in 2017.

Company officials contend that was more than enough to satisfy existing owners, but what had once been the world’s best-selling all-electric models began to slow in the marketplace as competitors like Tesla have come to market. The upstart California carmaker’s Model 3 is now out-selling the Leaf by a significant margin.

“Nissan absolutely needed to bring this out to remain competitive,” said Sam Abuelsamid, a senior analyst with Navigant Research.

The new 2020 Leaf Plus gets a 62 kilowatt-hour battery, about 50% larger than before, range stretching to 226 miles per charge. It remains air-cooled, as was the original Leaf, while most competitors are now opting for liquid cooling, but the approach reduces size, weight, complexity and cost.

Longer range does create one potential drawback. Using a 240-volt Level 2 home charger would now require 11.5 hours to recharge a fully depleted battery. But the 2020 Leaf Plus now can get an 80% refill using one of the increasingly common Level 3 public chargers in 45 minutes.

What could prove equally important to potential buyers, the motor on the Leaf Plus is rated at 217 horsepower, up from 147 when the second-generation Leaf launched, torque climbing from 174 to 250 pound-feet. The Japanese automaker didn’t release specific performance details but did promise it should be quicker both off the line and, especially, when merging into freeway traffic. 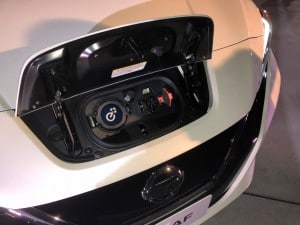 Leaf still lags both the Chevrolet Bolt EV, rated at 238 miles per charge, as well as the Model 3 which can top 300 with a larger, optional battery-pack. But while Nissan won’t release the price for the Leaf Plus until closer to its early spring sales launch, it is widely expected to be one of the least-expensive models topping 200 miles. The current version of the Nissan BEV starts at $29,990.

That price tag can jump by thousands of dollars for versions equipped with features like Nissan’s semi-autonomous ProPilot Assist system.

Nissan’s former global CEO Carlos Ghosn was one of the most vocal proponents of battery-electric technology in the industry and though the automaker has been slow to roll out new models it is expected to signal its future plans at the North American International Auto Show in Detroit next week. Both the Nissan brand and its luxury sibling Infiniti are expected to reveal new battery-electric concepts that could signal upcoming products.

LeVot declined to discuss what’s in store but, in an exclusive interview, he suggested that the latest bump in range for the Leaf might not mark the upper end. “In three to four years, we could have 300 miles,” he told TheDetroitBureau.com, though his comments could also reflect plans for future products.

As for the wave of new, long-range competitors that also include products from Kia and Hyundai, with Audi, Volkswagen and others set to follow, LeVot said “competition growing is not a bad thing. It is converting (more) people to electrification.”