For many truck buyers, mileage matters as much as payload, towing. 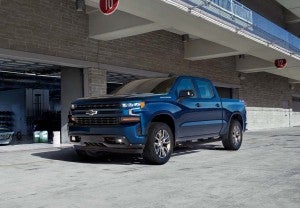 The 2019 Chevrolet Silverado will get up to 20 mpg in the city with the new turbo-four engine.

Who says pickup buyers only focus on power, payload and towing capacity? Operating costs are, for many customers – and especially those operating truck fleets – one of the most important factors they consider when choosing what model to buy.

That includes service and repairs, of course, but fuel costs are one of the biggest concerns, which is a key reason why automakers have been offering buyers a growing range of alternatives to the classic, big displacement V-8s that long dominated the full-size pickup segment.

Chevrolet is hoping it will score a hit with potential buyers with the new, 2.7-liter turbocharged engine it is adding to its powertrain option list for the all-new 2019 Silverado. While not quite up to the numbers delivered by some of the diesel engines now available in the full-size segment, Chevy’s turbo-four nabs a tie as the most fuel-efficient gas engine available for U.S. buyers.

The new engine, when used in some of the rear-wheel-drive versions of the 2019 Chevrolet Silverado 1500 will manage a full 20 miles per gallon in city driving, matching the numbers offered by the new, mild-hybrid version of the Ram 1500. On the highway, the Chevy engine will get up to 23 mpg, with a combined rating of up to 21 mpg, depending upon model. 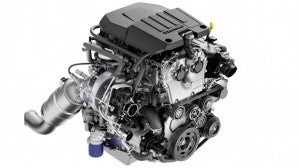 “The new Silverado 2.7L Turbo delivers impressive performance and fuel efficiency,” said Tim Asoklis, Silverado’s chief engineer. “It’s fun to drive every day — quick from the start, and pulling hard under acceleration. With up to 23 mpg on the highway, the truck is efficient while still offering plenty of capability to tackle weekend projects and trips to the lake.”

Towing capacity is about 5,000 pounds less than with the Silverado’s big 6.2-liter V-8, but that’s not expected to matter much to a large share of Chevy buyers.

Fuel economy has become an increasingly important target for manufacturers participating in the full-size market. Ford, for one, has introduced an array of more fuel-stingy EcoBoost turbo engines and, along with the base V-6 powertrain they now account for well over half of all F-150 sales. 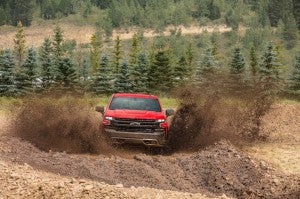 The 2019 Chevy Silverado is offered in eight body and bed configurations with six powertrain options.

Ram, meanwhile, has developed a large following for the EcoDiesel offered on its newly redesigned pickup. The 2019 Ram 1500 delivers up to 21 mpg in the EPA’s City cycle and 29 mpg on the Highway with a rear-wheel-drive package. The front-drive Ram 1500 gets an EPA rating of 21/26 mpg.

With the 2019 model-year, diesels are available for all full-size trucks sold in the U.S. except for the Toyota Tundra.

As for the new Silverado’s turbo-four, it uses the automaker’s active fuel management system which disables up to half of its cylinders during coasting and other light demand situations, as well as active thermal management to heat up the engine more quickly and improve cold start fuel economy and emissions. Standard stop-start technology further enhances the powertrain’s mileage.

(Click Here to check out the new off-roader, the Chevy Colorado ZR2 Bison.)