This time they mean it when they it’s all-new from the ground up. 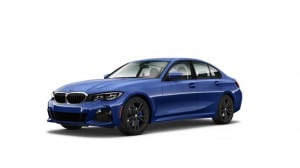 The 2019 BMW 3-Series sticks with a relatively familiar exterior design.

It may not be the most expensive model in the BMW line-up, and considering where the global luxury car market is going, SUVs and CUVs are coming to dominate the sales charts. But perhaps no model line better defines the DNA of the Bavarian automaker like the long-lived 3-Series.

So, expect to see and hear a lot about the all-new, seventh-generation compact, the 2019 BMW 3-Series to launch next spring in the U.S. market with the arrival of the 330i and 330i xDrive, as well as the M340i andM340i xDrive. And you also can expect to see a slew of additional versions, all the way up to the de rigueur M3, to follow in relatively short order.

Automakers often overuse phrases like, “all-new,” or “ground-up redesign,” but they appear to fully apply here, the gen-7 3-Series pretty much revisiting everything, including its basic platform, suspension and powertrain line-up. It also introduces or updates a wide range of technologies. That includes the 330e plug-in hybrid coming in 2020, as well as the debut of the BMW Intelligent Personal Assistant that uses plain-English commands to operate everything from navigation to audio and even lets you ask it what a warning light might be trying to tell you.

(Live from Paris! Click Here for complete coverage of the 2019 Mondial de l’Automobile.) 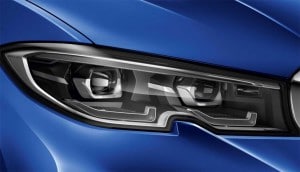 The new 3-Series will offer distinctive new laser headlamps - though it's not clear if that option will come to the U.S. yet.

The BMW has a storied history, dating back to its introduction in 1976 as the successor to the fabled 2002, the car that helped put the Bavarian automaker into contention. Since then, 15 million of them have been sold, giving BMW bragging rights as the best-selling premium car ever.

Maintaining momentum will be a challenge, nonetheless, going forward. In the U.S., SUVs and CUVs now account for more than half of all new vehicle sales and other key markets aren’t far behind. One of the pioneers in the luxury utility segment, BMW now offers an array of alternatives from the little X1 up to the soon-to-arrive X7, itself an alternative to the brand’s traditional sedan flagship 7-Series.

No wonder, then, that BMW has chosen to make such an expansive effort with the new 3-er, even using it, rather than a higher-line product like the also-new 2019 X5, to debut that Amazon Alexa-like personal voice assistant.

The new 3-Series, like many of the past generations, grows in almost every dimension. It’s 2.9 inches longer than the outgoing sedan, 0.6 inches wider and 0.5 inches taller, with a wheelbase that’s stretched 1.6 inches. But while the car’s track is also wider, front and back, the new suspension means ride height is 0.4 inches lower. Depending upon a configuration, meanwhile, the new model’s body sheds as much as 121 pounds due to a focused effort on lightweighting the sedan. 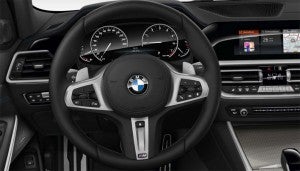 The revised 3-Series IP shows new gauges and screens - and gets a new personal assistant.

BMW will allow for more customizing of the new 3-Series design depending upon which of various packages a customer opts for, including the Sport Line, Luxury Line or M Sport.

Inside, it’s once again familiar BMW territory, with the cabin subtly reshaped to emphasize horizontal surfaces and accented with electroplated trim strips. The vehicles added dimensions are a boon to occupants, especially those in the traditionally cramped 3-Series rear seat. There’s now a large glass roof option to enhance the sense of openness, and an ambient light package that can change shades, brightness and even the way the light is distributed. 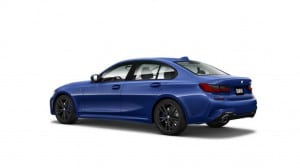 Both the 330i and the M340i feature updated engines boosting horsepower and torque.

The instrument cluster has been redesigned and, along with the new LCD display grouping makes space for the revised infotainment technology. As with new voice assistant assistants, such as Apple’s Siri and Amazon’s Alexa, the BMW Intelligent Personal Assistant lets a motorist use plain English to change the radio station or, for example, ask what the engine warning light means. There’s now a larger head-up display available.

(BMW gives a major range boost to the 2019 i3 electric city car. Click Here to check it out.)

The new 3-Series also adopts a broad range of new safety and advanced driver assistance systems, or ADAS, which, the maker explains, are “designed to ease the driver’s workload in monotonous driving conditions – such as traffic jams – and lends a helping hand in awkward maneuvering situations.” The adaptive cruise control, for example, can come to a complete stop and then start up again at speeds up to 81 mph. Somewhat surprisingly, BMW has chosen to make now-commonplace systems like Blind Spot Detection optional on some new 3-Series trim levels at a time when such features are becoming standard on many mainstream products.

The two 330i packages will be the first of the new line to reach showrooms. They’ll feature a new, 2.0-liter inline-four engine making 255 horsepower and 295 pound-feet of torque. That’s up 7 hp and 37 lb-ft from the old model, thanks to an updated twin-scroll turbocharger and Valvetronic system. An 8-speed Steptronic automatic transmission will come standard. BMW estimates 0-60 times of 5.6 seconds.

While the full M3 won’t arrive immediately, the M340i and M340i xDrive packages will be there by spring 2019. They both share a new version of the familiar straight-six making 382 hp and 369 lb-ft and capable of hitting 60, BMW estimates, in 4.2 seconds. The two M models will get sport chassis tuning and an M Sport rear differential.

Pricing hasn’t yet been released on the two M models. That should be announced closer to the spring on-sale date.