Two supercars will mark a limited run – and you’ll have to be invited to buy one. 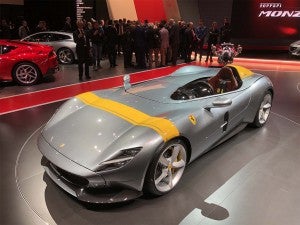 Ferrari plans to sell just 499 of its first two "Icona Ferrari" models like the SP1. No prices were announced, but assume well into seven figures.

Ferrari has a long and glorious history, its many fans are quick to point out, and the carmaker now plans to mine that heritage for a new line of retro-futuristic models that will be sold through a new collection dubbed “Icona Ferrari.”

That will start off with the Monza SP1 and SP2 supercars making their formal debut at the Paris Motor Show today. Ferrari said at its news conference that it plans to build just 499 of them. It will offer them, it suggested, “to our best customers.” In fact, potential buyers will have to be invited just to stand in line.

The forward-into-the-past design of the two Monza models is meant to harken back to one of the most glorious eras of racing, back in the 1950s and 1960s, when Ferrari dominated the European motor sports circuit.

The two vehicles are largely identical, though, as the name suggests, the SP1 can hold just one person, the SP2 making room for a passenger by eliminating the tonneau cover.

It doesn’t take a sharp eye to notice that neither Monza version is fitted with a windscreen. Instead, the supercars rely on a new concept that Ferrari is calling a “Virtual Wind Shield” which uses aerodynamic tricks to route air around the driver – and, with the SP2, the passenger, as well. 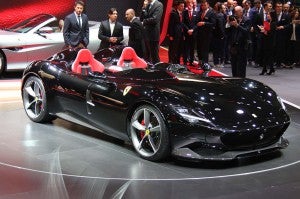 The SP2, which carries just two passenger, puts out more than 800 horsepower and boasts a zero-to-60 mph time of less than 3 seconds.

They may look old but they’re “very modern” interpretations, Ferrari officials emphasized during that news conference. The bodies, for one thing, are carbon fiber, rather than the hand-rolled and hammered aluminum that was state-of-the-art back in the ’50s and ’60s.

As for the powertrain, it’s a naturally aspirated 6.5-liter V-12 that produces 809 horsepower – notably, that’s 20 more prancing ponies than in the current Ferrari 812 Superfast. Those big headrests will clearly be necessary, as the Monza SP1 and Sp2 are both rated to hit 60 in a mere 2.9 seconds, while it takes just 7.9 seconds to go from a dead start to 200 kmh, or 125 mph.

(Click Here for details about Ferrari doubling its production levels a year early.)

Ferrari claims both the Monza SP1 and SP2 are street legal. It remains to be seen if that will be the case in the U.S. or if it might require some adaptation – perhaps even a helmet for driving without a windscreen on public roads.

How much? According to some sources, about $2 million, though others have pegged it at more than $3 million. 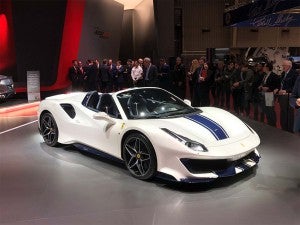 Feeling the need for speed, but your pockets aren't deep enough for the SP1 or 2, the 488 Pista Spider is for you.

For those with a little bit smaller bank account, Ferrari also staged the European debut of the new 488 Pista Spider at the Paris Motor Show. It becomes the 50th drop-top the Italian automaker has introduced, and the most high-performance version ever.

The Pista will be powered by a 720-horsepower engine that, it claims, will suffer from absolutely zero turbo lag.

The idea of seeing three new Ferraris debut at a single auto show might come as a shock to some fans, but the exotic carmaker is aiming for a major increase in sales over the next few years, Ferrari planning to roll out a total of 15 new models to back that up by 2022.