Danish designer reveals plans for a “menu of mobility” that will later include affordable electrics and driverless shuttles. 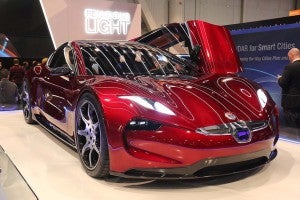 The gull-winged Fisker EMotion makes its official debut at the Consumer Electronics Show.

After months of teasers, Henrik has finally pulled the wraps off his latest project, the autonomous EMotion battery-eletric vehicle making its debut at the Consumer Electronics Show in Las Vegas.

The second attempt by the Danish designer to launch his own battery-car company, the EMotion is a stunning, gull-winged sports sedan that reportedly will offer a range of up to 400 miles, even while delivering blistering performance – top speed 161 mph – thanks to a new generation of solid-state batteries.

The EMotion isn’t due to market until sometime late in 2019. But in an interview with TheDetroitBureau.com, Fisker revealed that he is already working on future products as part of a “menu of mobility” that will include a much more affordable Tesla Model 3 fighter and even a driverless shuttle along the lines of the Toyota e-Palette concept that also debuted at CES.

(Will traditional automakers fall by the wayside as autonomous and electric vehicles flood the market? Click Here for the story.)

Bringing the EMotion out into the public arena was a critical step for the 54-year-old Fisker who first made his name with luscious designs like the Aston Martin DB11. He went on to start Fisker Automotive which itself was best known for the Karma plug-in hybrid. But the well-funded project melted down in spectacular fashion, the remains of the company recently re-emerging under Chinese control as the renamed Karma Automotive. His sleek four-seater has been renamed the Revero. 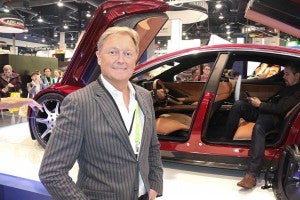 Henrik Fisker has big plans for his little start-up.

The EMotion bears a more than passing resemblance to that older model, at least visually, though it adopts distinctive gull-wing doors, front and back. The new car sits only 52 inches high with those doors closed – but it rides on low-profile 24-inch tires.

But what arguably matters most is what Fisker is doing under the skin, this time opting for a completely battery-electric drivetrain.

Initially, he revealed, the car will opt for a relatively conventional lithium-ion battery pack provided by LG Chem, one of the leaders in the field which also provides batteries for vehicles like the Chevrolet Volt plug-in and Chevy Bolt EV.

“We needed a very strong battery partner,” Fisker said with something of a grimace. Repeated problems with the Karma’s batteries – which came from the now bankrupt start-up battery supplier A123 – played a major role in his earlier company’s collapse.

That said, Fisker is expecting to switch to all-new solid-state batteries by 2020, using a technology he claims has been proven out by researchers at the University of California Berkeley and which his new company intends to build itself. 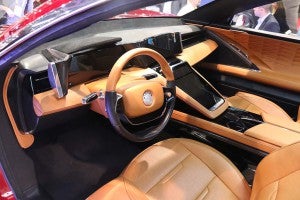 Inside EMotion: a mix of high tech and more traditional luxury touches.

Solid-state batteries have some key ingredients in common with current lithium cells, but the big difference is that they replace the liquid electrolyte with a solid ceramic material. Fisker claims the design he will use packs about 2.5 times more energy into a comparable mass – in line with what other solid-state developers, such as Colorado’s Solid Energy claim. The technology is expected to be substantially less expensive, as well as less volatile, and should be able to charge much faster, as well. Or so the claims go.

Industry experts expect solid-state batteries to revolutionize electric vehicles. Virtually every manufacturer is now working on or with the technology, though Fisker is clearly one of the most ambitious. Toyota doesn’t expect to have its solid-state batteries ready for mass production until 2022 and other carmakers and battery companies are looking even further out, often in the range of 2025 to 2027.

But Fisker could always stick with his LG Chem lithium-ion pack if the new technology takes longer than he hopes to reach prime time.

Those familiar with what is now called Revero will recall its interior was compact, almost claustrophobic. With the EMotion eliminating the range-extender gas engine and mounting batteries and key electric drive components under its floor, Fisker was able to grab back from space to deliver a more roomy package this time. That’s especially critical in the rear, a space that many potential buyers in the Chinese market will appreciate. In fact, one of the more interesting features of the EMotion is the optional 27-inch curved screen monitor in the back of the Chauffeur Edition. 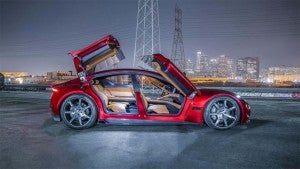 With its drivetrain largely under the floor, Fisker was able to squeeze in a bigger interior package.

Even without that TV the interior is lavishly finished. It features plenty of displays for the driver and front passenger, though laid out horizontally, more like the latest Mercedes approach than the tablet-style used by Tesla. The high-tech touches are countered by the lavish folds of leather, accented by carbon fiber.

From the outside, a secondary inspection reveals a series of dark panels along the front and rear fenders. These conceal LIDAR sensor provided by Quanergy, a high-tech supplier that let Fisker share its booth at the Las Vegas Convention Center. LIDAR is a high-def, 3D form of laser that is essential to turning a car into an autonomous vehicle.

The tie-up with Quanergy is significant as it has its own solid-state technology under development. Those big, spinning domes you might have seen atop earlier autonomous prototypes are bulky, ugly – and expensive, as much as $75,000 apiece. Quanergy’s solid-state design cut that to as little $900 in low volume and it is working up a smaller device that will cut that by a third. During an interview at CES, the supplier’s CEO and founder Louay Eldada gave TheDetroitBureau.com a peak at its next-generation LIDAR device, a thumb-sized chip that will come in at “under $100.”

(Toyota paints a picture of future mobility with e-Palette concept. Click Here to checkk it out.) 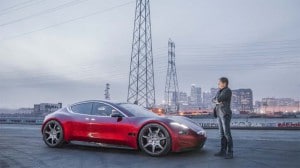 Fisker intends to follow EMotion with a "menu of mobility," including a Tesla Model 3 fighter.

The EMotion will offer a driver the option of operating in either manual or autonomous mode. So will the smaller, higher-volume vehicle Fisker revealed he is working on and which will come in under $40,000, allowing it to target the likes of the Tesla Model 3.

But that’s only the beginning of Fisker’s ambitious strategy. The EMotion sat on one end of the Las Vegas Convention Center’s North Hall, not far from the Toyota e-Palette, a concept shuttle that looks like a giant shoebox on wheels. Fisker sees a similar opportunity for flexible, driverless shuttles, but he views it from his roots as a sports car designer, declaring, “There’s no reason to ever build a boring vehicle.”

He hints we will see his take on the concept, and possibly some other possible products later this year.

What’s clear is that he is determined to take part in what Fisker calls “the biggest change in the auto industry ever.”

There are plenty of skeptics, quick to point at the disastrous meltdown of Fisker Automotive. But Henrik Fisker is determined to prove his critics wrong. There’s no question he has designed another stunning vehicle. And he’s certainly plugging in to some potentially breakthrough technology. Now he has to prove that he can turn his ideas and concepts into a real, functional company.