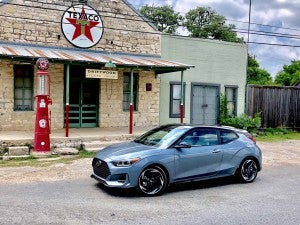 The second-generation Hyundai Veloster gets a larger grille, bolder fenders and wheel arches and a number of powertrain updates.

In their nearly three-decade history here in the U.S., the Koreans have seldom shied away from introducing oddball offerings. And while it’s not quite as quirky as the Kia Soul, the Hyundai Veloster doesn’t readily fit into any neat category. Consider the fact that it has three doors – not including its hatch – one on the driver’s side, two on the passenger side.

While clearly not mainstream, the Veloster has a loyal following, enough to convince Hyundai to ignore current trends that have led most automakers to trim back on their passenger car line-ups – and Ford to all but drop out entirely.

Fittingly, when it came time to launch an all-new, second-generation version of the Veloster, Korea’s largest automaker invited us down to Austin, Texas, a town locked in a battle with Portland, Oregon, for bragging rights as the country’s weirdest city. We won’t take sides on that debate, but after some time behind the wheel of several turbo versions of the 2019 Hyundai Veloster we can weigh in on its merits.

But before we offer judgement, here are some basic insights. 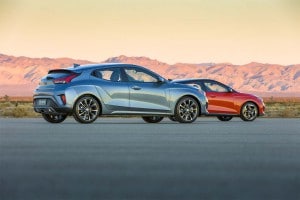 Hyundai offers two distinct flavors of Veloster, depending on which of the two engines you choose.

As with the original version, the 2019 Veloster retains its asymmetrical 1+2 door design. (It’s not the first car to use that layout, incidentally. We first saw that on the Saturn Coupe, though the approach there was far less effective.) The design contributes to the Veloster’s buzz, but there is some legitimate logic to the approach, as well.

Hyundai Motor American planning chief Mike O’Brien calls it “a car with two personalities.” From the driver’s side, you get a more sleek and coupe-like appearance. From the curb side there’s much easier access to the small, but functional back seat – which, Hyundai points out, now gets about 0.6 inches more headroom.

Since we have our tape measure out, the overall length of the 2019 Hyundai Veloster grows by a modest 0.8 inches, while the width expands 0.4 inches, to 166.1 and 70.5 inches, respectively. At 55.1 inches, the car’s height carries over, as does its 104.3-inch wheelbase. The most notable change comes in the form of a more spacious cargo compartment. At 19.9 cubic feet, it offers about a foot more space than the Honda C-HR crossover and more than twice as much room as the Mini Cooper.

The Turbo-R and Limited editions have plenty of spirit, enhanced by a new, multilink rear suspension.

Despite the generally subtle dimensional changes, however, you immediately recognize this is a new Veloster. It has, as Hyundai product planner Mike Evanoff notes, a wider and more planted stance. The grille, here picking up on generic industry trends, expands to a point just short of cartoonish. It is framed by new LED running lights. LED head and taillamps are optional on most versions, standard on top-line trim.

The basic visual styling is familiar, though it has a nicer roll to the fastback roofline and the crossbar that limited visibility out of the back glass has now been eliminated. Visibility, overall, improves, though the design does creates some blind spots. Among the distinctive Veloster details that carry over, the 2019 model retains the center-mounted twin exhaust pipes.

A closer inspection reveals how designers focused on improving aerodynamics, down to details like the new model’s functional front air curtains. But aero doesn’t dominate everything. Along with the bigger grille, the 2019 Veloster also sports larger, flared fenders and wheel arches. And the latter can frame the sort of rubber you wouldn’t expect in a car of this class, grabby Michelin Pilot Sport tires on the top-line models. 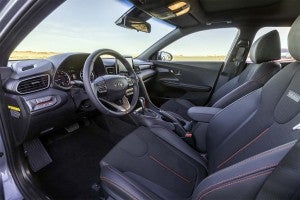 There's more cargo space in the Veloster than many new CUVs, including the Honda C-HR.

Inside, what had been a relatively Spartan cabin gets a nice upgrade for 2019, with a nice layout, an improved touchscreen controlled infotainment system, featuring both Apple CarPlay and Android Auto, and more soft touch materials — though there’s still hard plastic in several unwelcome places, notably by the armrests. That’s part of the challenge a “value” brand like Hyundai faces. It still has to appeal to buyers on a budget while also targeting newer, more affluent consumers – one reason for the two-engine powertrain strategy on models like the 2019 Veloster as well as the all-new Kona.

What’s impressive is that Hyundai put money into places where it matters. There’s now a multilink rear suspension, rather than a live axle. And there are more suspension elements made from aluminum, saving weight – read: better mileage and improved performance.

From a vehicle dynamics standpoint you recognize the payoff quite quickly. Normally, we’re reluctant to visit Texas for a driving event. No offense meant to the Lone Star state. It’s just that most of it is flat and unchallenging. But Austin (like nearby San Antonio) is in Texas Hill Country, with the best roads in the state. And Hyundai trip planners made sure we experienced a broad mix, from roughly paved farm roads to some of the country’s fastest freeways. 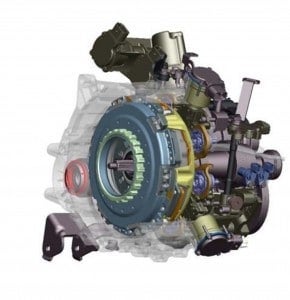 The DCT will be, for many buyers, the gearbox of choice on the Veloster Turbo models.

While not quite a match for, say, the Honda Civic Type-R, the second-generation Veloster is solidly planted, even in aggressive, yet off-camber corners. It’s the sort of vehicle that continues to build up a driver’s confidence the more you drive.

That said, we’d caution performance-oriented drivers to ignore the base model Veloster which features a competent, albeit uninspiring 148-horsepower naturally aspirated 2.0-liter inline four. Yes, you can have a little fun with its stock six-speed manual (a six-speed automatic also available), but this is a car for those on a tight budget, coming in at $18,385 plus $885 for delivery.

We actually didn’t get to test the base car, though we’ve experienced the 2.0-liter engine in other models. For the Austin drive, Hyundai brought in two versions of the Veloster equipped with its more exciting turbo-four. Displacing just 1.6 liters, it punches out a solid 201 horsepower and 195 pound-feet of torque. There’s really no noticeable turbo lag or torque steer, and that torque comes on full by just 1,500 RPMs.

We got to drive both the boy-racer edition, the Veloster Turbo-R equipped with a six-speed manual, as well as a more sleek Veloster Limited which came with a seven-speed dual-clutch gearbox. The two alternatives has our group again raising that eternal question: manual or automatic. To be blunt, it’s hard to argue against the DCT on the Veloster. Its shifts were smooth and lightning fast, and with the addition of paddle shifters offered the ability to control one’s destiny, so to speak. But it’s not quite the satisfying level of direct involvement offered by clutch and stick. 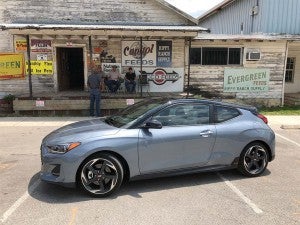 The 2019 Hyundai Veloster isn't for everyone, but should caerve out a loyal niche.

The Turbo-R adds a number of features to the package while bumping the price of the 2019 Hyundai Veloster up into the low to mid-$20,000 range, depending upon options. The Ultimate, meanwhile, jumps all the way to $26,650 – plus that delivery charge. And when you finish loading up options like the 8-inch navi system, the sunroof, a Head-Up Display and leather seats you could find yourself punching across the $30,000 threshhold.

Of course, that wouldn’t buy you very much if you were looking for a similarly sized SUV. In fact, you might not get nearly as much cargo space, for one thing, and almost certainly sacrifice some of the fun-to-drive quality of this sporty hatchback. About the only sacrifice is the lack of an all-wheel-drive option. And we’ll leave it to you do decide whether you crave a crossover’s higher seating position.

For us, the second-generation, 2019 Hyundai Veloster is a marked improvement over the gen-1 model. It’s better equipped, a bit better looking, offers a bit more functionality and a lot more fun to drive. It’s definitely not for everyone, especially in an era when SUVs and CUVs dominate the market. But for those who want something as quirky as Austin and reasonably priced, the Veloster should be on your shopping list.