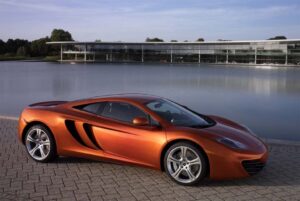 The McLaren MP4-12C will be followed by a number of other sports cars, says McLaren's managing director.

British supercar maker McLaren is planning to follow up on the introduction of its MP4-12C with a “much broader” range of high-end sports cars, a senior executive tells TheDetroitBureau.com.

By using lightweight materials, like carbon fiber, and other advanced technologies, McLaren Managing Director Antony Sheriff says the maker – best known for its successful Formula One team – should be able to meet stiff new fuel economy and emissions standards.  But he also hints that McLaren is looking at ways to integrate battery-based propulsion systems into some of its future offerings.

The McLaren MP4-12C will arrive in nine U.S. showrooms later this year carrying a price tag of $229,000.  But it is just the first model the maker has been working on, Sheriff revealed during a lengthy conversation following the New York Auto Show’s annual media preview.

“Between the various models (under development), we’ll have something new about once a year,” the executive explained. 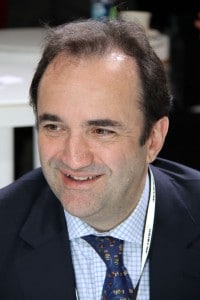 The executive declined to provide many details about future product programs, though he stressed that the company will “stick to building two-seat sports cars” that can make use of “a whole room of Formula One technology” McLaren has available.

The additional models will cover a range of “different price points,” both above and below the MP4-12C, according to Sheriff.

The first model to come to market since the maker’s SLR joint venture with Mercedes-Benz, the MP4 relies on a 600 horsepower, 3.8-liter engine that yields missile-like acceleration, said the 48-year-old Sheriff, who joined McLaren Automotive in 2003.

“The car will peel the skin off your face,” he suggested.

The entire product program has a development and production budget of $1 billion, he noted.  The venture has already pulled together “a few $100 million” to get underway, and expects to be able to generate enough cash, going forward, to remain self-funding.  “We have no debt,” boasted Sheriff, with no plans to take on any.

Asked what would happen if things don’t work out as well as planned, Sheriff insisted he is “not worried about” that possibility.  “One good thing about having a Formula One team,” he suggested, “is that you have a Formula One mentality.  If there’s a problem you don’t get phased, you get it fixed.

One concern is how McLaren will handle increasingly tough European and U.S. mileage standards.  The executive noted there are exceptions for small companies like McLaren in the European regulations.  But he added that that McLaren is being “ambitious” in terms of aiming for higher mileage than the traditional supercar – a benefit of using lightweight carbon fiber and advanced turbocharge technology.

“We don’t see this legislation as a threat.  We see it as a challenge,” Sheriff claimed.

Also expect to see McLaren find ways to utilize battery power – something it is already working with in its Formula One efforts.    It has found ways to generate as much as one horsepower out of a lithium-ion cell the size of a conventional AA battery, said Sheriff.  The challenge is to find ways to use that technology in a road-going automobile.