When Ford decided to bring back the once-popular Bronco nameplate four years ago, the development team decided “We haven’t done anything weird in ages,” according to chief designer Paul Wraith, so it decided to “see where this takes us.”

One of the most significant results was the idea of launching not just a single Bronco model but an entire “family,” including decidedly retro two- and four-door models as well as a more modern-looking Bronco Sport which will be the first to launch later this year, the bigger SUVs to follow sometime early in 2021.

The This “Baby Bronco,” as it’s become known, isn’t just a downsized take. It opts for a crossover architecture borrowed from the familiar Ford Escape. But don’t think of this as just another soft roader, members of the development team are quick to assert. Bronco Sport has undergone an extensive redesign they claim is every bit as capable off road as its bigger siblings.

“Bronco Sport is not an Escape with big tires,” insisted Adrian Aguirre, Sport’s chief program engineer, during a media backgrounder. “This vehicle punches way above its weight.”

There aren’t many things on the smaller Bronco that haven’t been updated, toughened or completely replaced, according to Aguirre and other members of the team who briefed journalists during an online seminar last week.

One of the most intriguing additions is dubbed GOAT mode and, as its name suggests, it’s designed to give the Sport maximum grip under all conditions and on all sorts of surfaces, from ice to mud to rocks. Think of it as a more sophisticated version of the Terrain Management Control found on more pedestrian Fords, like Escape and Explorer.

There are seven individual mode settings which instantly adjust  a variety of vehicle settings, including throttle, transmission and electronic nanny systems. (The GOAT name, incidentally, carries over from the project name for the original Bronco, “Goes Over Any Terrain.)

The Bronco Sport will offer two different powertrain options, depending on the chosen trim level. Base, Big Bend and Outer Banks trims will feature a 1.5-liter EcoBoost engine making 181 horsepower and 190 lb.-ft. of torque. The Badlands and First Edition series will get a big bump, a 2.0-liter EcoBoost punching out245 horsepower and 275 lb.-ft. of torque. Both engines will be paired with an eight-speed automatic, several trims adding steering wheel-mounted paddle shifters.

As with the two- and four-door models, all versions of the Bronco Sport will feature all-wheel-drive. To get a good bite, Bronco Sports can be equipped with up to 29-inch all-terrain tires found on the First Edition.

Visually, the Bronco Sport adopts a more modern shape than the decidedly retro two- and four-door models, but the ute’s heritage remains unmistakable, starting with the distinctively wide grille framed by twin round headlamps. But the body takes on a subtle yet more curvaceous appearance.

Inside, it picks up on the same “heritage” look as its big brothers, starting with the horizontal IP design, here featuring an eight-inch touchscreen display. One surprise was the decision to equip Bronco Sport with Ford’s Sync3 infotainment system, rather than the newer Sync4 technology that will be added to the bigger models when they launch next year.

To underscore the capabilities of the new Bronco line, those who buy either the two- or four-door models – along with the Badlands version of the Bronco Sport – will get free access to one of the Bronco Off-Roadeo “experiences” Ford plans to launch in 2021. Unlike the Jeep Jamboree, these will operate out of four fixed locations around the country. Everything but transportations costs will be included.

Ford isn’t ready to offer precise dates, but says Bronco Sport will reach showrooms “later this year,” the bigger 2- and 4-door models to follow early in 2021. The automaker is now taking initial, $100 deposits for all three Bronco models. 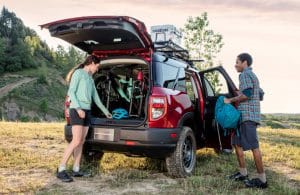 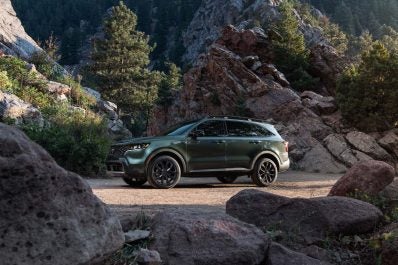