A new entry offers up an intriguing all-electric pickup.

Cracking into the U.S. automotive market is no easy feat. Since the end of World War II there’ve been dozens that have tried, including names like Tucker, Bricklin, Kaiser and DeLorean.

But it’s only with the advent of the battery-electric vehicle that there’ve been any real success stories — primarily in the form of Tesla. There are a handful of strong contenders, such as Lucid and Rivian, as well as a long list of failures. Where Lordstown winds up remains to be seen.

Earlier this year, it seemed like the Ohio-based EV wannabe was doomed to crash and burn. It’s management team baldly inflated advance sales numbers and Lordstown was forced to sell its assembly plant — an old GM facility in, appropriately, Lordstown, Ohio to Taiwanese mega-manufacturer Foxconn. Somewhere in Vegas the bookmakers were clearly giving long odds against the startup ever making it into production. It’s a bet I wish I had taken, though it’s still far from certain that Lordstown Motors will be a long-term survivor.

The company’s first offering, the Lordstown Endurance is finally rolling off the line at the now Foxconn-owned plant. Plans have shifted, however, and the company is now focused on the commercial market, rather than aiming at retail customers.

The truck itself hasn’t changed. It’s a full-size package riding atop a unique, skateboard-like platform. What’s unusual about the truck is that it relies on four individual “hub” motors, meaning they’re mounted within Endurance’s wheels. Lordstown officials claim the approach requires fewer moving parts which should translate into lower maintenance costs.

It took a while to line up an Endurance for a test drive, and I was limited to a long afternoon behind the wheel, putting it through its paces along my favorite route through Hell, Michigan and beyond. Here’s a first review.

Clearly not as radical as Tesla’s long-delayed Cybertruck, the Lordstown Endurance boasts a fairly conventional pickup shape, with a four-door cab and a 67-inch cargo bed. The automaker plucked its engineering team from Detroit and they brought with them some useful details, including steps built into the bumper to make it easy to reach into the bed.

Coming at the truck from the rear or sides you might not notice anything unusual. But the nose is the most distinctive detail on Endurance, with a broad panel replacing what would be a conventional grille, and slit-style lighting just below the hood. There’s a reasonably large frunk, or front trunk, under the hood, something that should appeal to buyers who don’t like leaving valuables inside the cabin.

Inside, Lordstown has adopted the screen-centric approach taken with virtually all new battery-electric vehicles. There’s a single display stretching from nearly the left A-pillar through the top of the center stack. It’s actually two screens: a big, easy-to-read digital gauge cluster, and the requisite infotainment unit.

While the touchscreen handles a broad array of vehicle functions, I actually prefer Lordstown’s approach compared to that of the Rivian R1T. Endurance features a number of conventional knobs and buttons, notably for its climate control system — its buttons, notably, being large enough to easily adjust the temperature and other settings while wearing thick gloves — work gloves, perhaps?

Overall, the cabin is rather basic when compared to the likes of the Ford F-150 Lightning or Rivian R1T, but it’s nicely finished and detailed, with an attractive two-tone scheme.

At least for now, Lordstown offers but a single powertrain package for the Endurance. The use of hub motors is an interesting choice. Among other things, that allows for a tighter turning radius than comparable pickups, at about 47 feet. But it does add a bit more unsprung mass to the wheels.

The four motors combine to produce 440 horsepower. In the quirky world of measuring output with an EV, the company has floated a figure of 4,800 pounds of torque. The bottom line is it punches out enough electrical grunt to hit 60 in 6.3 seconds and tow up to 8,000 pounds. (Cargo capacity has not yet been revealed.)

Those aren’t especially impressive numbers among the rapidly expanding list of all-electric pickups. But it isn’t out of line if your alternative were something like a Honda Ridgeline.

Range is a so-so 200 miles from a 109 kilowatt-hour lithium-ion battery pack. The carmaker claims you’ll need anywhere from 30 to 90 minutes to bring a drained pack from a 20% to 80% state-of-charge. The wide range appears to depend on factors including the amount of power a quick charger delivers, as well as things like weather. Cold temps require you to plug in longer.

The Endurance plays things simple. No adaptive suspension like the R1T, for example, just conventional leaf springs. But I found the ride more compliant and comfortable than I’d expected, especially with the heavy hub motors. And while it’s no sports car, I could flog Endurance around reasonably well driving along the Hell route.

The truck I drove was an early edition and wasn’t yet equipped with simple things like moving guidelines on its backup camera. And there were some other absences in the vehicle, notably when it comes to infotainment.

The good news is that Endurance has the ability to use smartphone-style over-the-air-updates. The camera display is one of several updates Lordstown promises are in the offing. Apple CarPlay and Android Auto are among other features to come.

There are easy-to-access USB plugs. And the twin screens, while relatively simple in their layout, provide plenty of information. It’s just easier to find things on those than on some other new battery-electric vehicles.

On the whole, Lordstown has done a reasonably good job pulling together the new Endurance. It appears to have reasonable cargo and towing capacity and a surprisingly roomy interior. But there’s a growing list of alternatives, such as the Lightning and R1T, that offer more features and functions, as well as increased power and range.

Nonetheless, Lordstown might yet find a market for the new Endurance among those that want a basic but functional all-electric work truck.

Who makes the Lordstown Endurance?

The truck was developed by an Ohio-based EV startup, Lordstown Motors. But that company sold its factory to help raise money needed to put the pickup into production. The assembly line is now operated by Foxconn, the Taiwanese firm that builds iPhones.

Is the Lordstown Endurance worth buying?

From our first drive the pickup appears to be well made and offers the sort of features you’d expect in a classic work truck — but here drawing power from a battery. And that means reduced energy and maintenance costs. But the $65,060 price tag isn’t cheap and there are some EV truck alternatives.

What sort of range does the Lordstown Endurance offer?

It’s 109 kWh lithium-ion pack can deliver about 200 miles per charge. That’s on the low side among the new crop of all-electric pickups. 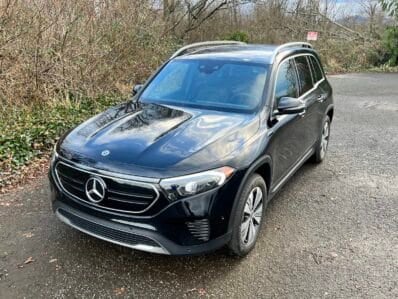