Mazda finally enters the electric car sweepstakes, but its meager range puts it at a severe disadvantage.

When the first electric vehicles hit the market a decade ago, they had a 100-mile range at best. But even then, it was far from satisfactory. That’s why you can no longer buy a new Audi A3 Sportback e-tron, BMW i3, Chevrolet Spark EV, Fiat 500e, Ford Focus Electric, Honda Clarity BEV, Honda Fit EV, Kia Soul EV, Mercedes-Benz B250e, Mitsubishi iMiEV, Smart fortwo BEV, or Volkswagen e-Golf.

So why would Mazda’s first EV, the 2022 Mazda MX-30, have a mere 100-mile range? Three words: California compliance car. It’s a vehicle built at a loss to please the unelected overlords at the California Air Resources Board (CARB), whose draconian requirements must be met to allow the automakers to continue selling cars in California.

Hopefully, a handful of customers won’t mind the vehicle’s limited range. But don’t expect to see an MX-30 EV elsewhere. Instead, a plug-in-hybrid version of the MX-30 will be offered nationwide for 2023. So, this is an easy way for Mazda to please CARB — just take out the smelly gasoline bits.

Going on sale in mid-October in California, the MX-30 is a compact battery electric crossover utility vehicle with a mere 100 miles of range. Prices start at $33,470 plus destination charge, before federal tax credits.

Options include the Premium Plus Page, which inflates the price to $37,665, but adds driver assistance aids such as blind spot assist, parking sensors, and front cross traffic alert, along with a number of luxury touches, including a heated steering wheel, Bose premium audio system, heated steering wheel auto-dimming side mirrors, cargo area light, 18-inch alloy wheels among the major features. The only other option is paint, which runs as high as $995 depending on color.

All buyers do get a $500 credit at ChargePoint chargers, or towards the purchase of a Level 2 home charger. Given its meager range, it will be needed. They also get 10 free rentals of a Mazda of their choice from their Mazda dealer, for when you might want to travel farther than 100 miles.

Credit Mazda with crafting a crossover with a short, pug-like stance that sets apart in a sea of hatchbacks. Notably, the MX-30 revises the rear-hinged doors last seen on the Mazda RX-8. Given the rear seat has little to no rear seat legroom, the rear doors will rarely be opened. Given that this vehicle’s target market is younger, first-time buyers or commuters, back seat space probably isn’t a priority anyway. Still, they lend the MX-80 a unique appearance.

Mazda has learned that brevity is the soul of elegance. As is typical of Mazdas, its cabin connotes a premium feel, with a clean, eloquence that seems far more luxurious than its market segment. Yet there are some puzzling features.

The climate control is a touchscreen, framed by buttons for frequently used functions and it proves easy to use. Uniquely, the center console is accented in cork, a nod to Mazda’s origins as a cork manufacturer in the 1920s. Nice touch. Too bad cork stains so easily.

Neither the National Highway Traffic Safety Administration nor the Insurance for Highway Safety has crash-tested the MX-30.

The 8.8-inch infotainment screen is compatible with Apple CarPlay and Android Auto. But the infotainment system is controlled through a rotary controller, which is less than ideal. But the MX-30’s small screen lends a Zen-like calm to the interior.

Much effort was put towards ensuring that the MX-30 was free from the jerky response that can be generated by lead-footed EV drivers. The result is a driveline retains a Stepford Wife-like calm, so you’ll find yourself flooring the throttle when you need a bit more gumption, only to be met with a smooth indifferent flow of power.

Thoughtfully, Mazda offers paddle shifters typically used for the automatic transmission for adjusting the amount of regenerative braking effort. But to add more, you must counter-intuitively select the minus button, not the plus button, which removes regenerative effort.

Driving the MX-30 is a bit more fun than most EVs, but not as much fun as a Mini Cooper Electric. Body lean is well controlled, but a test drive along glass-smooth roads did little to reveal ride quality. Keep in mind the chassis is far from exotic, consisting of MacPherson struts up front and a torsion beam out back. Steering is fairly quick, but numb with some weight. The cabin remains quiet. Over-the-shoulder visibility is hampered by its styling.

There’s little doubt that the 2022 Mazda MX-30 is a pleasantly sporty car to drive, one that would make an excellent commuter, which how Mazda is pitching it. But if you want a pleasant commuter, you don’t have to spend this much. You could have a Mini Cooper, which is far more fun to drive, costs less, and has a 115-mile range. Then there’s the even-cheaper Nissan Leaf, which has a greater range.

The MX-30’s meager battery makes this far from a good value proposition in a market segment not known for value. While there are buyers who won’t mind recharging at home every night, there are better options that render this vehicle DOA ­until Mazda adds a competitive amount of range or releases its PHEV variant.

Pricing begins at $34,695, including destination charge.

What is the range of the MX-30 electric?

What electric car has the greatest range?

The Tesla Model S, which travels 405 miles on a single charge, more than four times greater than the MX-30. 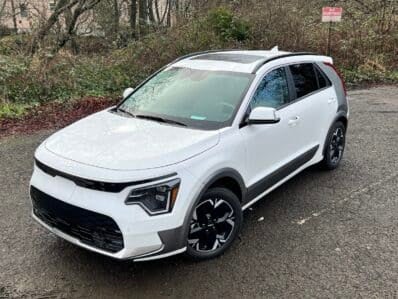