This jack-of-all-trades manages to handle them all with aplomb.

We could hear the new Ram 1500 TRX coming from more than a block away. It’s big V-8, basically the same one you’ll find under the hood of the Dodge Challenger SRT Hellcat, emits an unmistakably menacing growl as it cruises along, a warning to all within earshot that this isn’t your ordinary pickup.

It takes a bit of dexterity to climb inside, especially if you depend on that thin little wedge of a running board. But, once inside, you’ll discover a cavernous and lavishly equipped cabin that might make you forget you’re driving a truck. Indeed, with the price tag for our test vehicle pushing up perilously close to the six-figure mark, the 2021 Ram 1500 TRX Crew Cab could be considered for some an alternative to a traditional luxury vehicle like the Mercedes-Benz S-Class.

Overview: Pickup trucks are hotter than ever and automakers are responding with a record array of options and alternatives. Long the third name on the sales charts, Ram has itself been gaining momentum in recent years, especially since launching an all-new, fifth-generation version of the 1500 for 2019.

Why? There are plenty of reasons, starting with that big Hellcat motor which punches out an astounding 702 horsepower. That makes it the most powerful pickup ever without an extensive aftermarket workover. It makes the Ford Raptor, at a mere 450 hp, seem positively anemic and, since we brought up the S-Class before, the TRX has 100 more ponies ready to run wild than the vaunted Mercedes-AMG S63.

What’s particularly impressive, however, is just how well mannered the Ram can be when you’re simply out for a cruise. It’s pretty much ready for anything, whether taking the kids to school, pulling a trailer of up to 8,100 pounds, or heading out for some serious off-roading. Just be ready to gasp when it’s time to fill up the gas tank.

Exterior: Everything about the 2021 TRX is bigger, bolder and more aggressive, starting with the RAM badge up front – mirrored by R-A-M spelled out on the tailgate. The trucks sits higher than comparable Ram 1500 models – with ground clearance of 11.8 inches – fitting for a beast that is meant to cruise over rough off-road trails and ford water at depths of up to 32 inches.

The already oversized grille is complemented by a huge hood scoop that seems to be sneering at other drivers as it roars up in your rearview mirror. You might need to work a little harder to stick to your lane on a narrow road considering TRX is fully 8 inches wider than the other members of the Ram 1500 family, with composite wheel flares accommodating a track that is six inches wider. They barely conceal aggressive 35-inch Goodyear Wrangler Territory 325/65/R18 All-Terrain tires that are themselves an inch wider than the standard 8-inch width rubber on more mundane versions of the pickup.

The only thing that isn’t huge is the cargo bed which is the shorter Ram package. Nonetheless, the truck can handle a full 1,800-pound load.

Interior: My biggest single gripe about the TRX – even considering its fuel economy – concerns what Ram has passed off as running boards. There’s barely enough there to handle a single toehold, not a true foothold. I’d be nervous relying on them during an icy Michigan winter.

Once you clamber inside, however, be prepared for a pleasant surprise. The Crew Cab is easily as big as any high-line sedan short of a stretched Maybach or Rolls-Royce. And it is outfitted in a manner a luxury buyers can appreciate. With the latest version of the 1500 series, Ram has won kudos for its interior design, materials and layout. It has taken everything up a couple notches with the TRX. You’re getting a lot more for your money than just a big motor.

There’s storage everywhere, the multi-level center console providing enough space for a decent-sized laptop computer. Some space was freed up by the use of a new e-shifter. For those who’d like to row their own, the TRX also features big aluminum paddle shifters behind the flat-bottomed steering wheel that is wrapped in leather and microsuede.

Our tester was, as far as we could tell, outfitted with every factory feature you could tick off on the checklist, including head-up display, heated and ventilated seats, a heated steering wheel and more. It also boasted a digital gauge cluster and the massive Uconnect touchscreen atop the center stack. The portrait layout is to our liking, showing more of the road ahead. It also provided plenty of real estate to place a variety of different functions on the screen simultaneously, such as navigation and audio. On the downside, we’d prefer real buttons or knobs for some functions, such as seat heaters.

A closer inspection reveals an array of buttons and knobs serving other duties, such as the truck’s axle lockers and optional trailer towing function. It serves as a sort of mini steering wheel helping you properly direct a trailer when shifted into reverse.

Powertrain: Ram’s parent, Fiat Chrysler, has wisely chosen to find multiple uses for its Hellcat engine, which first debuted under the hoods of the Dodge Charger and Challenger muscle cars. You’ll also find it in versions of the new Dodge Durango, as well as the Jeep Grand Cherokee.

While it has bumped up as high as 807 hp in the new Challenger Super Stock, the supercharged 6.2-liter V-8 here makes a still impressive 702 ponies and 650 pound-feet of torque. Power is directed through an 8-speed automatic to all four wheels. There’s no rear-drive model available for TRX and, to be honest, we’d be skeptical if Ram offered one.

The official numbers suggest a 0-60 launch in just 4.5 seconds, itself astounding for a full-size pickup. Checking in with my media colleagues, they’ve seen numbers that push from the high 3 second to low 4s, and some reports show the TRX blowing through the drag strip traps at the end of a quarter-mile run in just over 12 seconds.

The multiple functions this truck is capable of are signaled by a panel off to the side of the steering wheel. With a touch of a button you can shift from 4 Low to 4 High gearing, or engage the axle locker. There’s also a Launch Control button which allows you to rev up to the open takeoff speed and then release the brake. As the folks at Dodge like to say, “Spinning is not winning,” so this ensures you get maximum grip on launch.

Technology and Safety: As you’ve likely noted, there’s plenty of technology onboard the 2021 Ram 1500 TRX and it falls into three categories:

There are those features meant to assist those who’ll use this, at least occasionally, as a work truck. Other tech features are there for creature comfort. Still more are designed to enhance the truck’s behavior, both on- and off-road.

The 12-inch UConnect display serves all three chores. It’s fully reconfigurable and the touchscreen is quick and easy to operate. It offers not only navigation but real-time traffic, SiriusXM radio and the 360L service with customizable “stations” provided by Pandora. There’s also an onboard WiFi hotspot. For audio fans, there’s an upgraded 900-watt premium Harman Kardon audio system with 19 speakers and a 10-inch subwoofer.

The touchscreen, incidentally, gets a number of features and functions not found on the rest of the line, including Drive Modes and Performance Pages, as well as a forward-facing camera that makes life easier, whether parking in a tight urban setting or trying to negotiate a difficult trail. 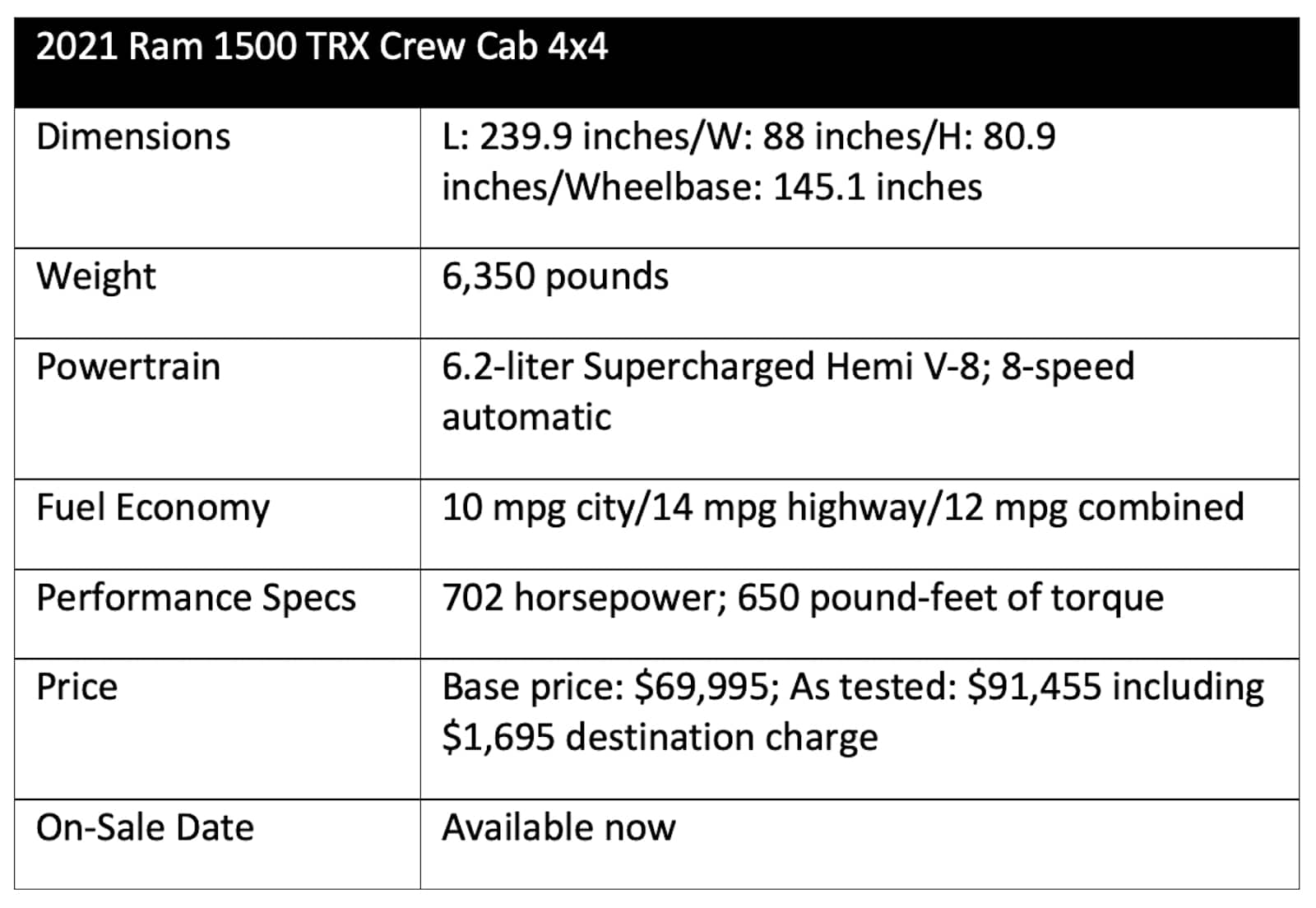 Driving Impressions: At a recent media briefing, members of the Ram team kept referring to the TRX’s “Jekyll-and-Hyde” personality. It’s a fitting term, and a real plus in this instance. On the road, the big truck proved surprisingly easy and comfortable to drive. It was not only well-mannered but unexpectedly quiet – as long as you weren’t standing on the throttle, unleashing the big Hellcat engine. Sure, the steering is a bit vague, but the overall ride and handling is a lot better than you might expect, especially considering those 35-inch tires. Some trucks designed for off-roading are a handful to drive around town. Not the TRX.

The pickup can be pushed to its limits in a variety of ways. With a heavy foot it can sub for your muscle car, putting to shame many of the more conventional performance vehicles on the road today.

Then there’s off-road. Sadly, my concerns about the coronavirus led me to bail out of a cross-country trip to drive the TRX through the Mojave and on trails running between California and Utah. I did get a bit of a chance to challenge the TRX around Detroit but clearly didn’t close to the extremes.

The 2021 Ram 1500 TRX has been beefed up in all manner of ways to handle rough trails – and even a Baja-style jump. That includes additional support on the ladder-and-frame chassis, skid plating, Bilstein Blackhawk remote-reservoir shocks, an electronically locking rear differential and other upgrades.

Wrap Up: When you write about cars you’ll be cycling through a lot of different models every year. I often measure a product by how I feel when it comes time to turn back the keys. In this case, I was more than a bit disappointed when it was time to swap out my 2021 Ram TRX.

Yeah, there were a few reasons to gripe, starting with those running boards. And the fuel economy made me gasp, at a measly 10 mpg City, 14 Highway and 12 Combined. According to the EPA, the typical owner would be looking to spend more than $4,000 annually on fuel. Then there’s the price tag. True, the TRX starts at “just” $69,995, but the price on a well-equipped model climbs up fast, the one I drove coming in at $91,455 after factoring in the $1,695 delivery fee.

Then again, you get a lot for your money, and that amazing Hellcat engine is just the most obvious ingredient. For those who want the ultimate in a pickup, one that can haul and tow, perform like a muscle car, handle serious off-roading like a pro and then  deliver a surprisingly quiet and comfortable cruise around town or on long trips, the 2021 Ram 1500 TRX pulls it together like no other product on the market. It’s not only a jack-of-all-trades, but one that masters them all, as well. 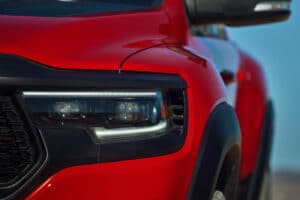 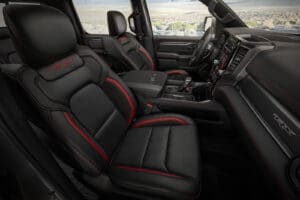 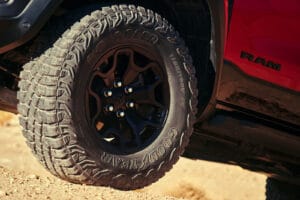