One of the market’s overall compact CUVs gets a welcome makeover.

How times have changed. When the Nissan Rogue made its debut 13 years ago, small and midsize sedans dominated the U.S. market. Today, millions of buyers have migrated to the crossover segment and Rogue is not only the Japanese automaker’s best-selling product line but one of the most popular vehicles on the market overall.

That said, where Rogue once was among just a handful of compact CUVs it now has to line up alongside an assortment of tough competitors, such as the Toyota RAV4, Honda CR-V and, from the domestic side, the Ford Escape.

Overview: We recently reviewed the outgoing 2020 Rogue and, despite its age, found it a viable option for compact ute buyers. Now, after spending some time in the all-new 2021 Nissan Rogue we have to say we’re pleasantly impressed.

With all the competition it’s facing, Nissan wisely decided to go for a ground-up redesign, with an all-new chassis and a marked redesign, both inside and out. Better yet, the new Rogue gets a powertrain upgrade as well as plenty of new creature comforts and safety features.

For those looking for something a bit more refined and lavishly equipped, meanwhile, Nissan has added a new premium trim package, the Rogue Platinum rivaling pushing into near-luxury territory.

Exterior: The 2021 Rogue’s new platform measures ever so slightly taller and wider than the outgoing model, though overall length is the same. Among its advantages, the new platform is both stiffer and lighter, with the more extensive use of high-strength steel and aluminum shaving 160 pounds of mass overall.

“… The new crossover lifts from the concept X-Motion we saw a few years ago, here introducing a new and larger take on the brand’s double-V-Motion grille that’s now framed by split lighting ….”

Slit-like running lights sit directly beneath the hood, the Rogue’s headlamps midway down the grille.

While there’s a subtle slope to the 2021 model’s roofline, the latest version of the Rogue sits more upright, with the nose all but vertical. There’s subtle sculpting to both the silhouette and the wider looking rear end. The goal, according to its chief designer, was to give it “a more robust feel, (and) athletic stance.”

It’s also a bit more convenient to use, especially for families with kids that need to be fitted into child seats in back, thanks to rear doors that now swing open nearly 90 degrees.

Interior: The “family hub” design of the cabin includes upgraded seating, with Nissan’s distinctive “Zero-gravity seats” now used front and back. The new platform has opened up the interior, meanwhile, with more space, especially for back seat passengers.

As you’d expect of a family vehicle, there are plenty of storage nooks – including space freed up under the center console by the switch to an electronic shifter. Other useful options include a tri-zone climate control system and a motion-activated power tailgate. The cargo area includes a Divide-n-Hide system to protect valuables.

With the addition of the new Rogue Platinum, Nissan is covering a lot of territory with the 2021 crossover. The base S model is relatively Spartan, while the top-line package offers such niceties as 8-way power seats and nicely executed leather and the sort of trim you’d expect to find, at least in years past, on an Infiniti model.

The new platform and other improvements also translate into less interior noise and vibration. And buyers will find some unexpected options, such as pull-up sunshades for rear passengers.

Powertrain: Considering Nissan’s desire to be out front with battery drive technology, there had been speculation the 2021 Rogue might offer some sort of electrified powertrain – especially since the outgoing SUV had an optional hybrid package. Demand was less than Nissan planners had expected, however, so they’ve decided to go with a single gas-powered offering – at least for now.

They chose well with the new Rogue’s 2.5-liter DOHC inline-four making 181 horsepower and 181 pound-feet of torque, up 11 and 6, respectively. Paired to an upgraded Nissan CVT transmission, it’s quicker off the line than the outgoing model, though no rocket.The new engine does manage to deliver as much as 27 miles per gallon around town, 35 on the highway, with a combined rating of up to 30 mpg, depending upon the trim package and whether you opt for front- or all-wheel-drive. Across the line, mileage increases one to two mpg.

The 2021 Nissan Rogue also adds a new Mode Selector knob that lets a driver chose from three modes with the FWD powertrain, five if you go for AWD.

Technology and Safety: The tech list includes Rogue’s first 12.3-inch digital gauge cluster – on some trim levels — and the choice of a 7.0 or 9.0-inch touchscreen display. There’s even an optional 10.8-inch head-up display system. The infotainment system includes Android Auto, as well as Apple CarPlay, with an upgrade allowing the use of the new wireless CarPlay system that can be run with an iPhone using the inductive Qi charging system. Wireless Android Auto isn’t available yet.

The Rogue gets the latest take on Nissan’s ProPilot technology which gets an upgraded camera and radar sensing system to assist the driver in steering and braking. And with the ProPilot Assist with Navigation system, the car’s active cruise control grows smart enough to adjust your speed automatically at highway exits and interchanges without having to touch the brakes or disengage the system.

The new model also gets built in WiFi and a fair number of USB ports, front and back – including new USB-C connectors. And the 2021 Rogue comes with a free, six-month to the Nissan Concierge Personal Assistant program that, among other things, can be used to order groceries and make Amazon Prime purchases.

Drive Impressions: We were uniformly impressed by the 2021 Nissan Rogue’s ride. It helps to have a new suspension system, including a multi-link rear, to both soften the harsh roads along our Michigan drive route yet provide an unexpectedly sporty feel as we thrashed the CUV around the tight turns through the appropriately named town of Hell.

While we’d love to have another powertrain option, especially in the top-line Platinum trim, the 2021 model’s I-4 reasonably handled whatever we asked of it during the course of nearly 200 miles of driving on freeways and local roadways.

The refinement of the cabin added to the overall pleasure of driving. 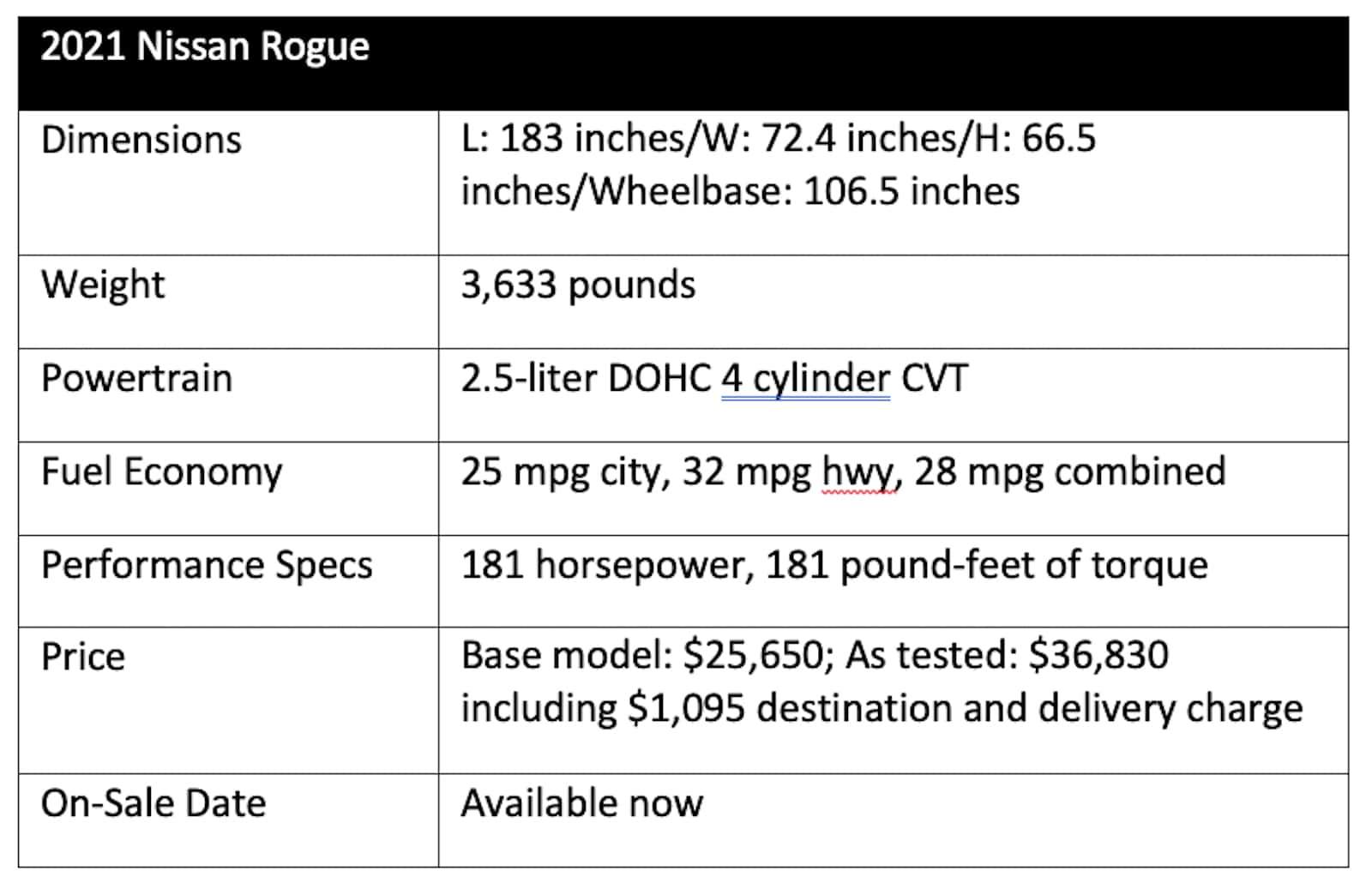 Wrap Up: Those who might think back to the early days of the Nissan Rogue, when it was a relatively anonymous looking SUV with pretty much entry-level refinements and features, are likely to be in for a real surprise with the 2021 model.

Even the base model, starting at $25,650 – before factoring in a $1,095 delivery charge – marks a big improvement over the outgoing crossover. And the Platinum package could easily win over buyers who might otherwise look at something in the entry-luxury class from brands like Infiniti or Lexus. The price walk-up will take you to $36,830 for the top-line trim with all-wheel drive, but considering what CUVs are going for these days, that’s not out of line.

The compact crossover market is today one of the most crowded segments you can find, with plenty of good options to choose from. Nissan knew it had to make a big jump to keep the Rogue line competitive and it has delivered what was needed. We expect the 2021 Nissan Rogue will be the siren call bringing lots of potential buyers into the automaker’s showrooms.