Sporty performance, as well as high mileage, will have you rethink what a hybrid is all about.

Honda was one of the first manufacturers to bring hybrid technology to market. In fact, it beat the Toyota Prius into U.S. showrooms by a few months with the Insight. But the original Insight had only marginal success. The fact that it seated just two passengers was one disadvantage, but so was its stone pony performance, despite incredible fuel economy that could top 70 miles per gallon.

Honda remains committed to hybrid technology, however, and its latest addition, the 2021 Accord Hybrid gives good reason for midsize buyers to do a reality check. Sure, it still offers great fuel economy of as much as 43 mpg combined. But rather than asking you to sacrifice performance and creature comforts, Japan’s third-largest automaker has actually found a way to use the gas-electric drivetrain to make the new entry more fun to drive.

Overview: While not the top-performing powertrain package for the 2021 sedan – 2.0T winning that crown – the new Accord Hybrid is clearly a lot peppier than the 1.5-liter package that is the option of choice for the majority of buyers.

It is surprisingly quiet, with an attractive exterior design that doesn’t fall into the trap of earlier hybrids that felt they had to add Jetsons-style tweaks to show they were somehow different. The Accord Hybrid boasts a roomy interior and cargo space that no longer is minimized to squeeze in its 1.3 kilowatt-hour lithium-ion battery pack. In other words, it enhances the standard, gas-powered Accord while demanding little to nothing in the way of sacrifices, but for the higher price tag starting at $26,370, plus $995 in delivery fees.

Exterior: From the outside, you’ll have to look closely to recognize a hybrid version of the 2021 Accord, which is fine with us.

The Accord Hybrid gets a slightly wider grille than conventional versions of the sedan which, ironically, does a better job of concealing the radar and other sensors used by the Honda Sensing suite of driver assistance technologies. All hybrids now get fog lamps, EX and higher trim levels adding all-LED lighting.

“… The days when gas-electric vehicles had to look space-age funky has come and gone, as far as we’re concerned …”

Interior: The extra $1,600 you pay for the new Accord Hybrid doesn’t just go for the gas-electric driveline. All versions get additional features and more well-executed interiors. Even base models now feature an 8-inch touchscreen to control the infotainment system, along with Apple CarPlay and Android Auto.

The overall appearance of the cabin is much more refined with the latest-generation Accord, with realistic fake wood, as well as aluminum accents, and far less hard plastics and more soft-touch materials where your arms and hands might come to rest. The seats are comfortable and, depending upon trim, are heated both front and back. Ventilated seats also available.

But what may be the biggest surprise isn’t what you see but what you hear. Make that what you don’t hear. Start up the 2021 Honda Accord Hybrid and it is virtually silent. Even as you start to drive, the cabin noise levels are lower than with the gas-powered packages.

(Honda gets approval for Level 3 driving in Japan.)

Powertrain: If you’re looking for the fastest, most powerful version of the Accord you’ll likely be drawn to the 252 hp 2.0-liter package. But you won’t sacrifice much going with the hybrid. Honda has come up with a variety of different hybrid-electric layouts, starting with the single-motor system offered for the Civic and pushing up to the turbocharged, three-motor technology on the Acura NSX supercar.

The 2021 Accord gets a new two-motor system that produces a combined 212 hp and 232 pound-feet of torque. It’s an interesting layout, with the bigger, 181-hp/232 lb-ft motor tethered directly to the front wheels. The second motor is paired with the gas engine and used to either feed current to the main motor or top off the lithium-ion battery pack. Unlike the CR-V Hybrid, the Accord is available only in FWD.

Honda officials stressed the work they have done to both smooth out the operation of the two-motor driveline and to make its torque come online both quicker and more smoothly. Launch feel is notably improved, as a result.

The hybrid delivers an EPA-estimated 44 mpg City, 41 Highway and 43 Combined – numbers you can drive up a bit by using the regen paddles on the steering wheel. Another plus is that by using more aggressive regeneration you don’t have to hit the brakes as often, much as would be the case downshifting a manual gearbox.

While the Accord Hybrid isn’t the most efficient entry in the midsize sedan segment, it’s only slightly behind the 46 mpg Combined rating of the Toyota Camry Hybrid and the Hyundai Sonata Hybrid’s 47 mpg rating.

Safety and Technology: Even the base version of the new Civic Hybrid offers niceties such as that touchscreen as well as CarPlay and Android Auto. From the EX trim up, wireless versions of those systems are added and you also get wireless smartphone charging. Options include navigation as well as a useful head-up display system, remote engine start and keyless entry.

Upper trims, like the EX-L, will add a 10-speaker audio package, parking sensors and the full range of Honda Sensing driver assistance technologies. The automaker points to improvements it has made with both active cruise control and lane-keeping assist to make them smoother and more transparent.

Drive Impressions: While many buyers will focus on the Accord Hybrid’s impressive mileage, here’s where the sedan really shines. From a driver’s perspective, there are simply no sacrifices. Acceleration is smooth and responsive, especially at launch, where you get that instant-on electric torque serving as something of an electric turbocharger. 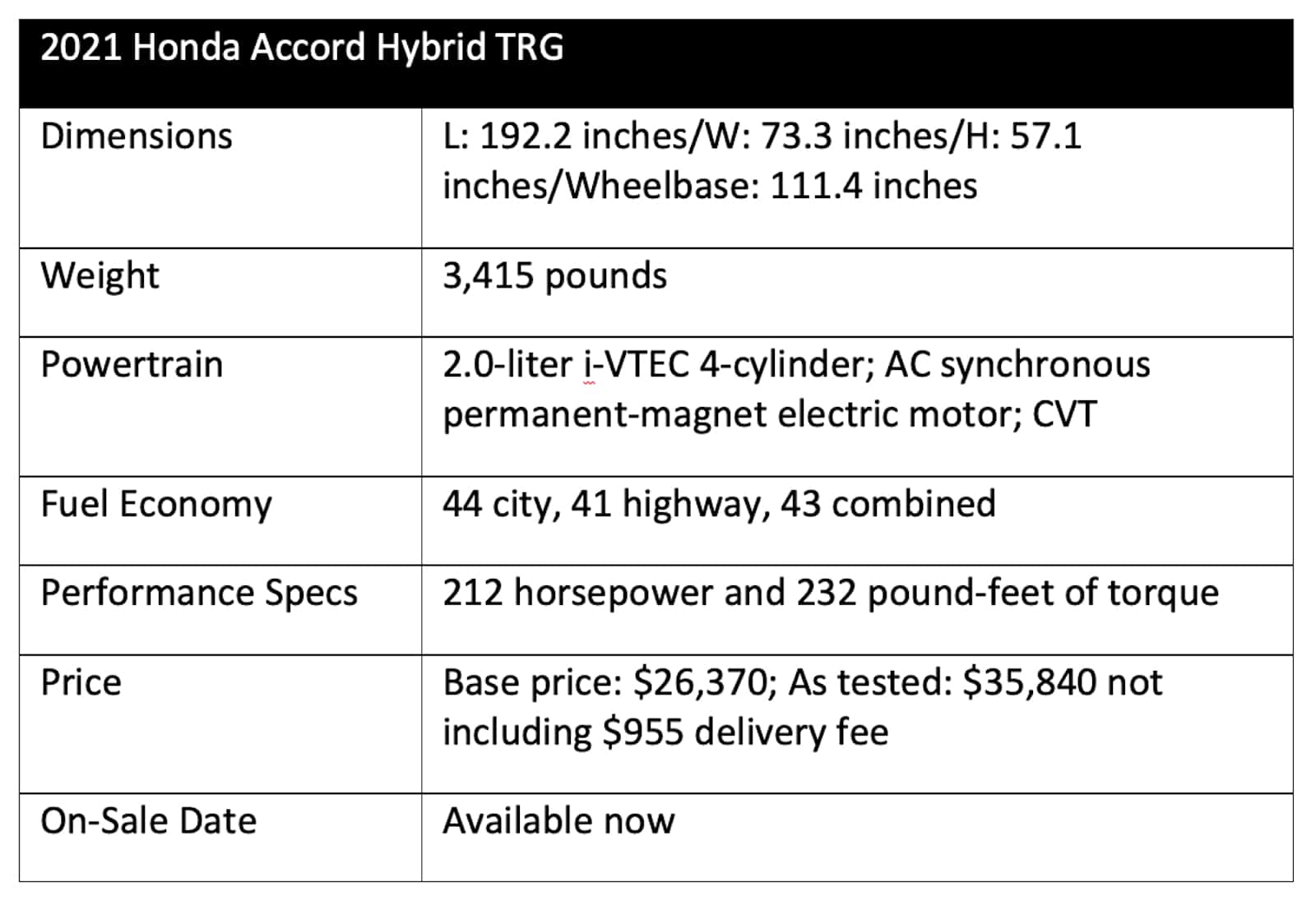 At low speeds, the Accord Hybrid starts out under electric power – and will do so a bit more when the Drive Mode selector is set to EV. Even when the gas engine kicks in there is nothing abrupt and you might not even notice it happened, even without the radio on. Sport Mode brings both powertrains to life more rapidly for a bit more takeoff power.

While all the added electric drive technology does add weight, the latest batteries have gotten smaller and more efficient and you don’t have to worry about tossing all that mass around, whether on rough pavement or while flogging the 2021 hybrid through corners. If anything, Honda has retuned the steering for the gas-electric model and it gives it a more sporty feel than gas models.

Wrap Up: It’s hard to find fault with a car that adds a lot in terms of mileage, quietness, comfort and accessories and demands a relatively modest price premium in return. Even the top-line Touring model comes in at a quite reasonable $36,240 before options and that $995 delivery fee.

It’s taken time for Honda to get the formula down, but its latest-generation hybrids are a marked improvement over what it offered in earlier years. And the 2021 Honda Accord pretty much nails it. 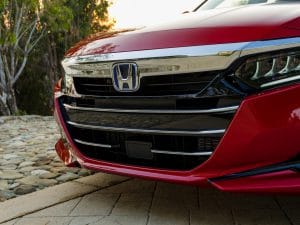 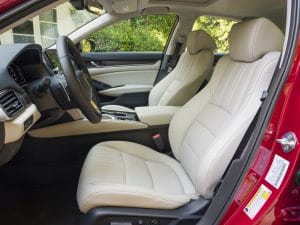 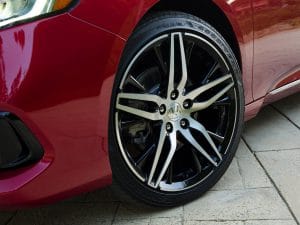