The Korean luxury marque’s first SUV was worth the wait.

Genesis, the luxury brand spun off from Hyundai Motor Co., finally has filled the yawning gap in its line-up with the launch of its first-ever SUV, the GV80. Until now, Genesis has had to make do with three sedans.

While they’ve all been well reviewed – and the G70 named North American Car of the Year – that’s just not a winning formula in a market where utility vehicle now openly dominate the market.The GV80 “starts a new journey for Genesis,” suggested brand boss Mark Del Rosso.

As TheDetroitBureau.co has reported, Genesis has several other crossovers, including the smaller GV70, due to join it next year as well as the brand’s first all-electric offering still a few years out. How the GV80 fares in the near term could set the stage for whether Genesis can finally break through and pose a real challenge to more familiar luxury brands, such as BMW, Lexus and Mercedes-Benz.

Overview: For Genesis, the GV80 is meant to be a game-changer, finally offering it an entry into the booming luxury crossover market. Roughly on a par with the G80 sedan, it will take on such competitors as the BMW X5 and Mercedes-Benz GLE.

The 2021 Genesis GV80 features bold styling, inside and out, lavish appointments and a pair of solid powertrain options. As with the rest of the brand’s line-up, meanwhile, the new SUV has been aggressively priced, something that its key competitors shouldn’t ignore.

Exterior: The GV80 picks up on many of the design cues recently seen with the launch of the latest-generation G80 sedan – with which it shares its underlying platform. That includes an oversized version of the brand’s “crest grille,” framed by slit-like quad headlamps that also are set to become a Genesis styling cue. Twin character lines distinguish the body sides, with subtly flared wheel arches accenting the SUV’s power.

The overall look can be thought of as “athletic elegance,” suggests Luc Donckerwolke, newly named Hyundai Motor Group’s chief creative officer. What we like about the design is that the GV80 isn’t just another SUV amidst a widening sea of highline models. Yes, that massive grille is a bit over the top, but it somehow strikes a balance between upscale elegance and muscle car edginess.

Interior: Here’s where the 2021 GV80 aims to show it can stand up to comparisons with the best European competitors, such as the Mercedes-Benz GLE. There are quilted leather seats and plenty of subtle details like machine-knurled knobs.

The dimensions of the GV80 almost make it a “tweener,” with a wheelbase of 116.3 inches, a length of 194.7 inches, and a 77.8-inch width that really pays off inside. The front seats are capacious and exceedingly comfortable on long drives, Genesis designers aimed to give passengers a feeling of width that carries over to the standard second-row bench. Captains chairs are optional, as is a third-row, though you’ll sacrifice cargo space for a couple additional, kid-size seats.

Powertrain: Genesis will offer the GV80 with a choice of two different powertrain packages: A turbocharged 2.5-liter inline-four in the 2.5T model makes 300 horsepower and 311 pound-feet of torque, reasonably impressive numbers for its size. The upgrade in the GV80 3.5T is a 3.5-liter V-6 that is also turbocharged and punches things up nicely at 375 hp and 391 lb-ft of torque.

We’re waiting for preliminary factory times but a very rough estimate is around 6 seconds 0-60 for the GV80 2.5T AWD, the 3.5T coming in a second faster.

Technology and Safety: Here’s one of the places where the new Genesis crossover really shines – and where it could connect with younger, tech-oriented buyers. The ute uses a new take on active noise control that can cancel out road and engine noise. Those quilted front seats, meanwhile, can be ordered with what the Korean carmaker calls “active motion” technology. Each contains seven automatically adjusting air cells and, Genesis claims, can help reduce driving fatigue.

The instrument panel features not only a wide digital gauge cluster but a 14.5-inch touchscreen atop the center stack. The widescreen format has its advantages, starting with the ability to display several different functions simultaneously, such as a map and radio info. The downside is that it’s not going to show you very much of what’s ahead of you if you’ve got the map orientation set so your car is always pointing up.

Instead, you rely on a smartphone app which can be shared with several other drivers. The SmartPark function, meanwhile, allows you to exit when dealing with a tight parking spot and have the car roll in on its own.

An audiophile? You also can equip the GV80 with a 21-speaker Lexicon sound system. They’ll handle both Apple CarPlay and Android Auto. Surprisingly, Genesis hasn’t added wireless version yet, nor a WiFi hotspot. 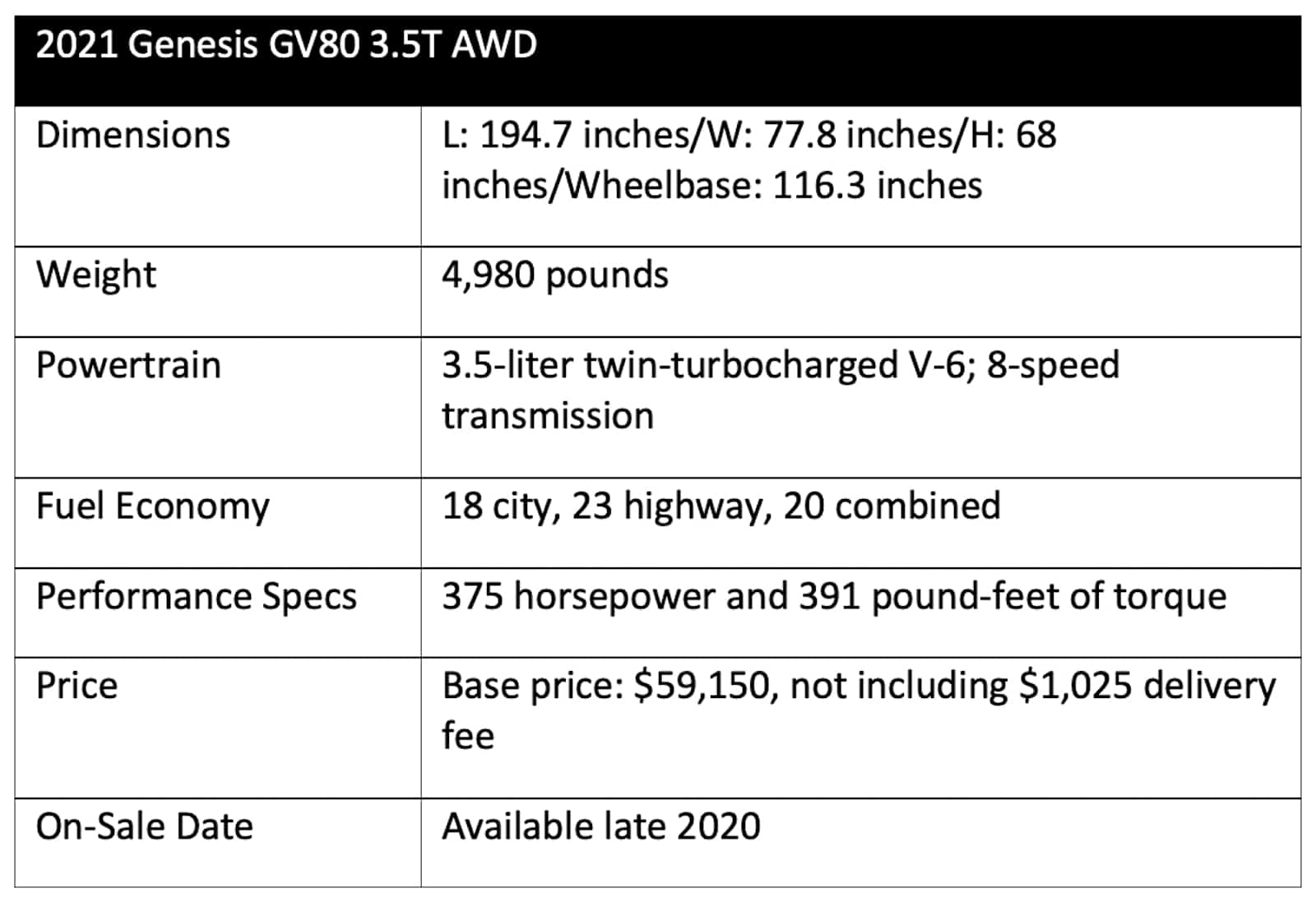 Driving Impressions: As with the rest of the Genesis line-up, we were impressed with the drive dynamics of the 2021 Genesis GV80. We spent most of our time behind the wheel of a well-equipped 3.5T all-wheel-drive package and found it to be extremely comfortable on Michigan’s traditionally potholed roadways, the suspension readily soaking up all but the biggest bumps.

While not quite delivering the spirited sort of handling you might find with the BMW X5, the Genesis SUV came impressively close under more aggressive maneuvering. And the fact that the turbo came on quick, with little lag and no apparent torque-steer were definite pluses.

While the 5,700 pounds of the GV80 are a lot to throw around, the 2.5-liter turbo manages to do so with reasonable aplomb. The 3.5-liter package clearly has its advantages, however. And that includes not only the improved performance but the nicely resonant growl it makes when your foot is down to the floorboard.

Wrap Up: As earlier noted, Genesis has positioned itself as a “value” luxury brand, much as Lexus and Infiniti did when they entered the market 30-some years ago. The GV80 isn’t cheap, but it clearly has a price advantage when compared to competitors like the X5 and GLE with its starting price of $49,925 for the rear-drive version of the 2.5T. At the high end, expect to spend a bit over $70,000 for a lavishly equipped 2021 Genesis GV80 3.5T in AWD. (Add another $1,025 to those numbers for delivery fees.)

The reality is that, even at a somewhat higher price, the various GV80 models would stand up nicely against the competition. The Genesis line-up, as a whole, is impressive. But, in this crowded market, it takes a lot for a new entrant to really stand out. It’s likely to take some time for the GV80 to carve out a niche, but it’s a critical addition to the Genesis line-up in today’s market. And it would be a mistake to ignore it if you’re looking for an SUV in this class. The 2021 Genesis GV80 may be late in arriving but it is clearly worth the wait. 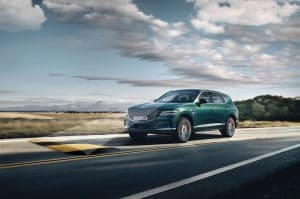 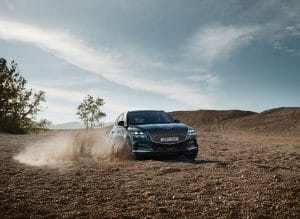 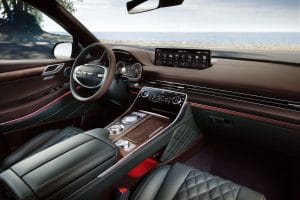