Solid, inside and out, but needs more power.

Old nameplates, it seems, don’t die, they just go into hibernation. We’ve been seeing a number of once-familiar badges make a return of late, notably the Ford Bronco. Now, Chevrolet is reviving one of its own, bringing the TrailBlazer back in the form of a new SUV.

And, no, it’s not replacing the bowtie brand’s current Trax model. With demand for small crossovers growing almost exponentially, Chevy has decided there’s plenty of room for a new model splitting the space between the entry-level Trax and the bigger Blazer.

Overview: The 2021 Chevrolet Trailblazer is a handsome affair, both inside and out, especially when done up in a two-tone paint scheme. It’s also reasonably affordable, starting at just $19,995 – a base that actually comes in lower that the entry version of the Trax – though the better equipped Trailblazer Activ and RS trims can get you up to more than $30,000 in a hurry.

Even the base model is fairly well equipped, with the sort of digital tech that appeals to young buyers on a budget. But where the 2021 Chevrolet Trailblazer falls short is under the hood. The entry offering is an anemic turbo-three making just 137 horsepower.

The upgrade bumps that to 155, acceptable but certainly not something you’d use “spritely” to describe. It’s not a deal breaker, but it’s the weak point in an otherwise impressive package.

Exterior: Chevy aimed to give each of the three Trailblazer trims their own, distinct identity, starting with exterior design. The base L model is, as you’d expect, aimed at bargain hunters.

… We anticipate the biggest demand will be for the two highest trim levels, the RS putting the emphasis on the “sport” in SUV, the Activ emphasizing “utility” …

All three versions share the same, basic styling, with a thin upper grille framed by slit running lights and a larger main grille set in between the primary headlamps. Sharp creases not only give the side panels a little character but also help to make the crossover look longer than its 173.7-inch overall length would suggest. The roof, meanwhile, has an aggressive slope to it that is itself accentuated by the two-tone paint scheme available on the higher trim levels.

Accent trim on the RS model, along with its 18-inch wheels, are meant to give it a sporty look, the Activ, meanwhile, going with 17s and higher sidewalls intended to give the model an off-road-capable appearance.

Interior: When it comes to today’s crop of small SUVs, the biggest sacrifice is space. Literally the biggest surprise with the Trailblazer is the interior roominess, the new crossover adding a full five more cubic feet of cabin space over the base Chevy Trax, easily enough for four adults.

There’s also a reasonable amount of cargo space, 25 cf with the rear seat up. Fold them down and you not only get significantly more room – 54 cf – but a flat load floor. The cabin also has plenty of storage bins and niches.

The cabin, meanwhile, has a level of refinement that might surprise you, especially in the Activ and RS trims. As with the exterior, Trailblazer’s design team gave the instrument panel detailing that might make you forget its relatively low price. The standard 7-inch touchscreen, meanwhile, can be upgraded to an 8-inch package that we found on both the Activ and RS models we tested.

Powertrain:  Two different turbo-three engines are available for the 2021 Chevy Trailblazer, starting with the base 1.2-liter option that makes just 137 hp. It’s paired with a CVT gearbox, while the upgrade gets an optional nine-speed automatic. The bigger engine, at 1.3 liters, punches things up to 155 hp and 174 pound-feet of torque.

It’s an improvement but, with a 0-60 time we estimate at just under 10 seconds, it’s not going to earn the word “quick.” If quick acceleration is critical, the Trailblazer, even with the 1.3-liter engine, falls short of competitors like the Mazda CX-30 and the Kia Seltos.

Safety and Technology: When you’re targeting millennials and Gen-Zs you have to load up on the digital features, and Chevy planners didn’t miss that lesson.

… The upgraded touchscreen is responsive and quick, and the voice controls appear to be effective, based on our admittedly limited testing …

You’ll find the essentials, like Apple CarPlay and Android Auto and they’re even operable wirelessly on upper trim packages. Wireless Qi smartphone charging is optional, along with USB B- and C-ports for the rear seat. 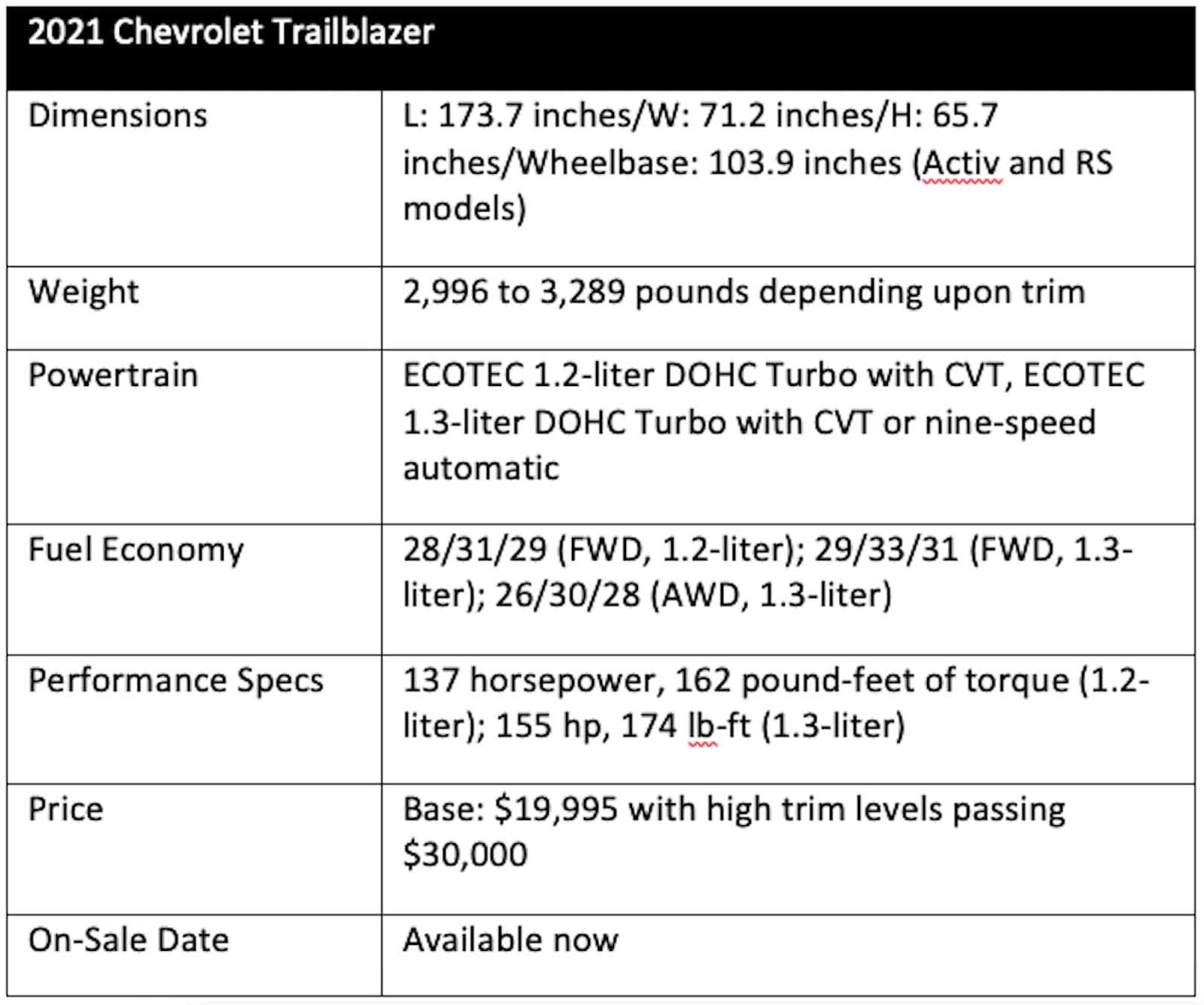 Safety gear includes a backup camera, though Chevy makes you upgrade for a higher-resolution camera, a chintzy sort of move. Forward Collision Warning with Automatic Emergency Braking and Lane Keeping Assist are two standard features with the Chevy Safety Assist system, while active cruise and Rear Cross Traffic Alert are among the options.

Drive Impression: We had daylong runs in the Activ and RS models and found they did, indeed, exhibit distinctive characteristics. The active dampers and high sidewalls on the Activ’s 17-inch tires soak up bumps a bit better than with the sportier RS which feels more planted at highway speeds. The two models do exhibit a moderate amount of body roll, however.

The driver’s mode switch, when set to Sport, tightens up the steering and modifies shift settings for a bit more exuberant ride – especially if you’ve opted for the all-wheel-drive version of the 2021 Trailblazer. But among its competitive set, this is clearly not the sportiest option, even in RS trim.

Wrap Up: The 2021 Chevrolet Trailblazer is, at many levels, an impressive offering. It’s among the most attractive models in its segment. It offers lots of interior space for both passengers and cargo. It has a reasonable level of digital technology – especially if you click all the boxes – and it’s reasonably priced.

We’d love to see Chevy put in some more work on the powertrain side of the package, and ride dynamics could yet use some modest tweaks.

But, on the whole, the reborn nameplate is a solid package and worth considering for anyone looking for a good value in a small SUV. 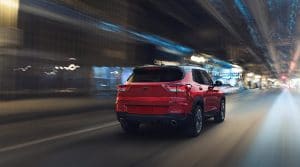 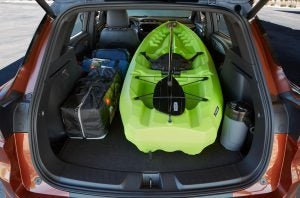