The bratty, if brawny, younger brother of the line-up.

We all know someone who has survived despite cataclysmically bad health or made poor decisions in life. And so it goes with Aston Martin. This is a company that very nearly went bankrupt for the EIGHTH time last year, having declared bankruptcy seven times since it was first incorporated in 1913. The company’s finances can be explained by their P&L statement — mostly L.

That German influence can be seen at the top the company: the firm’s newest CEO, Tobias Moers, is the former chief executive officer of Mercedes-AMG, replacing Andy Palmer.

Nevertheless, Aston Martin has been actively building on the Vantage GT’s racing success, after garnering 26 titles in 2020. It continues refining its entry-level sports car with the addition of a roadster to join its coupe counterpart.

Do I have to mention that the Vantage is a sports car? Of course not. Its beguiling appearance broadcasts it, as does its forceful exhaust note. The coupe is derived from the newest Vantage that debuted in coupe form in the summer of 2018, right around the time the company launched its IPO on the London Stock Exchange. With the exception of changes made for going topless, the Roadster shares its bits with its older relative.

Much like an athlete’s attire speaks to their profession, the Vantage’s shape and tautly stretched skin accent a stance and demeanor that were shaped with two reasons in mind: speed and sex appeal. The power top stows in just a few seconds, although finding the power top button is a challenge. For the uninitiated, it’s on the lower part of the driver’s door near the map pocket. How eccentrically British.

“… Looking good costs money, and it clearly shows on this little lovely ….”

Climb inside and you’ll find space for two and but not much for accompanying lifestyle debris. There are two small cupholders, a shallow map pocket on each door and a vertical glovebox mounted between the two seats at the rear of the cabin.

Of course, if you need to haul stuff, get a truck. This is a sports car. While some parts of this interior truly shine, such as the incredibly firm, supportive, yet all-day comfy seats, the cabin lacks the glamor of larger, pricier Astons thanks to some trim details that seem cheap, such as the air-conditioning vents.

Any misgivings you might have disappear once you hit the start button. That’s when the beast under the hood awakens, in this case, a Mercedes-AMG twin-turbocharged 4.0-liter V-8 that generates a smile-inducing 503 horsepower and 505 pound-feet of torque through a rear-mounted ZF 8-speed automatic transmission on its way to the rear wheels.

As in the coupe, not only does the engine carry over, so does the active suspension, torque vectoring, and limited-slip rear e-differential. And yes, there are driving modes, but this car’s mission is clear. You won’t find Comfort or Eco driving modes, only Sport, Sport+ and Track.

Thankfully, there are no driver-assistance aids, like lane-keeping assist. This is a true driver’s car.

But there is an 8-inch flatscreen that anchors the instrument panel, controlled by a rotary knob and ancillary buttons on the center console for audio, navigation and Bluetooth. It’s clearly a Mercedes-Benz COMAND system hand-me-down, and somewhat of a letdown, which is perhaps why Apple CarPlay and Android Auto are not offered, but you probably won’t care. The Vantage exhaust’s brawny baritone makes for an intoxicating symphony — one that you’ll rarely tire of hearing.

Despite 132 pounds of added weight due to the top mechanism and extra bracing required, Aston Martin states the Roadster hits 60 mph in 3.7 seconds, a mere two-tenths of a second slower to 60 than the coupe. Only track hounds will notice the difference. Top speed is 190 mph, 5 mph less than the coupe. Again, only Fast and Furious types will care. 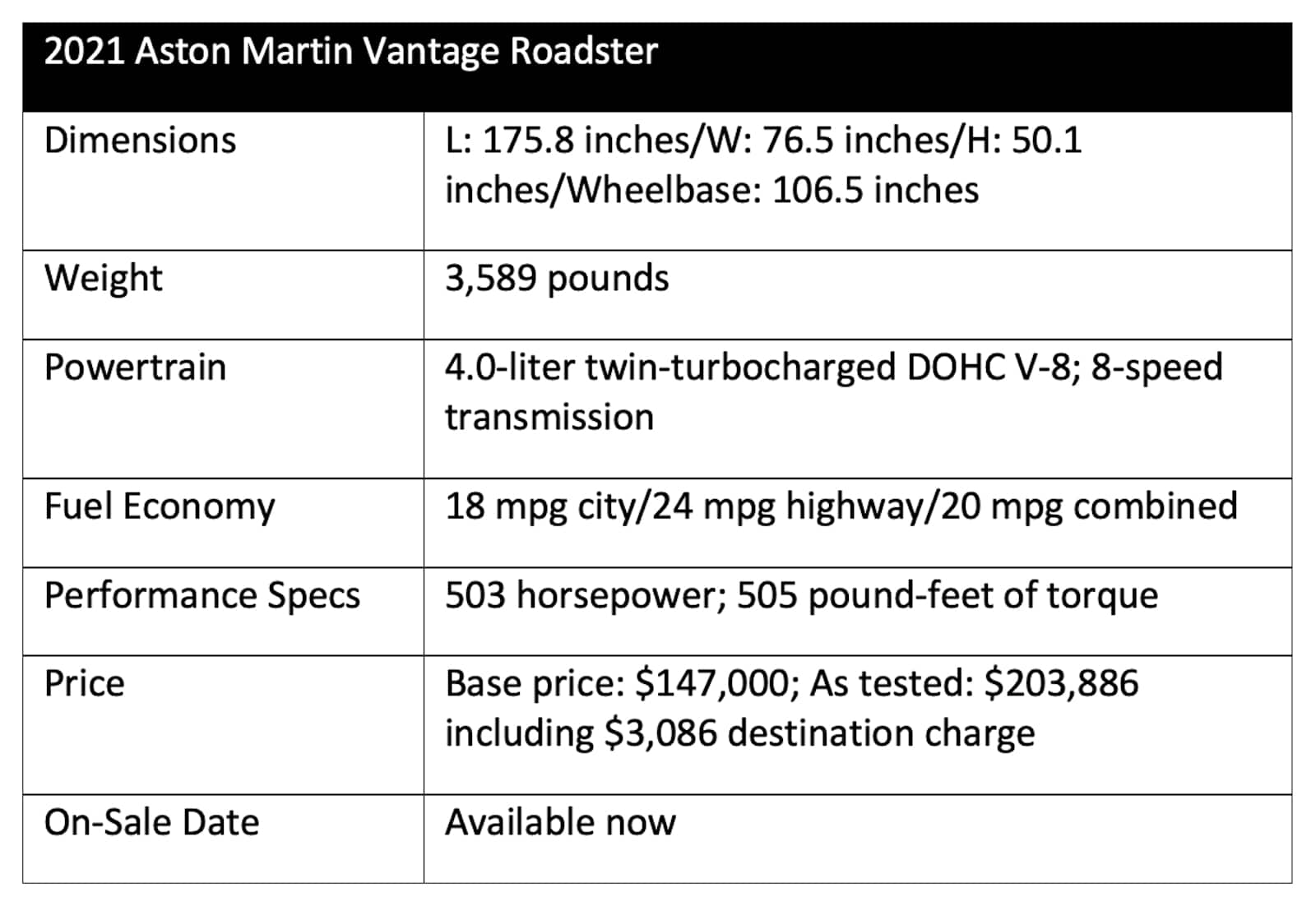 In a marque renowned for its comfortably fast, exquisitely built GTs, the Vantage is the bratty, if brawny, younger brother. The Vantage is all about performance, nimbly absorbing the worst road abrasions while remaining taut and entertaining, thanks to its adaptive damping system. Thankfully, the tail will dance when commanded while still allowing exquisite driver control.

Popping through the different modes dials up the vehicle’s wild child nature; driver discretion is advised. Yet as fierce as this car performs, there’s an underlying civility that separates it from its Continental compatriots in other countries. There’s an ample supply of civility; this is still a GT, making this a whole mess of fun and comfort. Of course, there is road noise and tire noise, even when the snug roof is raised, but that’s to be expected.

One final note: despite the AMG powerplant and Mercedes-Benz infotainment system, this doesn’t feel anything like a Mercedes-Benz, any more than an Aston’s last V-12 made the car feel like a Ford. After all, Aston’s V-12 was little more than the matrimony of a pair of Ford Duratec V6s.

It’s easy to assail the Aston Martin for its minor flaws, such as the infotainment system. But that fits into its spot in the automotive marketplace. It’s a refined red-hot bauble for Blue Bloods, one that may not have cutting edge latest technology, but more than enough to be current. It’s a product of class production, not mass production and, like all Aston Martins, an automotive gem that’s meant to be savored. 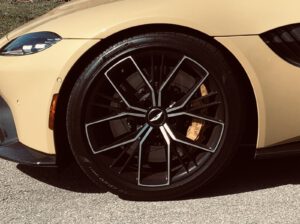 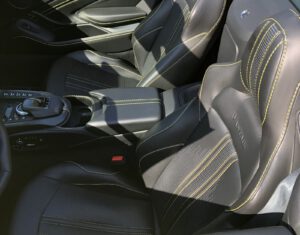 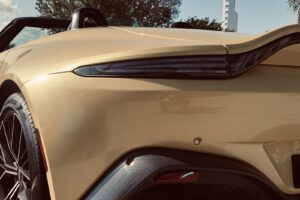