No skidding. We test the new VW EV on hard pavement and slick ice.

The ice is so slick this morning I would need a mountaineer’s crampons to be able to stand upright. Instead, I’m going to drive a new Volkswagen ID.4 over the frigid surface – fast, trying to navigate a slalom course without spinning off into a wall of snow.

I’ve had two opportunities to drive the new Volkswagen battery-electric vehicle this past week, first from my home near Detroit, then at this automotive winter testing facility in Michigan’s Upper Peninsula.

That offered time to get familiar with the ID.4. Made for now in Germany — with U.S. production to start in 2023 — the ID.4 is just being to delivered to the first dealers, sales to start immediately. The ID.4 will be a critical product for VW, which is betting more than $80 billion on its electrification program.

The Volkswagen ID.4 is the automaker’s second long-range battery-electric vehicle, or BEV. It follows to market the smaller ID.3 hatchback that debuted in Europe last year.

Both ID.3 and ID.4 share the same, underlying architecture – along with dozens of other all-electric products that Volkswagen is developing, Dubbed the MEB, this modular platform can be configured in a variety of ways and will underpin the ID.Buzz microbus, among the next VW BEVs coming to the U.S.

The MEB can support a variety of drivetrain configurations and, initially, the ID.4 comes as a rear-drive model. That includes the limited-run First Edition models I have driven this week. Later on the compact crossover will get both a boost in performance and all-wheel drive when a two-motor version goes into production later this year.

“Green” vehicles tend to go to extremes. Some manufacturers like the excesses of designs like the Toyota Prius, others do not want their electrified offerings to look any different at all. With the ID.4, VW struck out for middle ground. It has a distinctively techie and futuristic look — with touches like a lightbar running across its nose — but not to excess.

Beyond the lightbar on the miniscule grille, along with the unusually short hood, there is little about the ID.4 that would immediately tell someone that this is a battery-electric vehicle. There are recessed door handles to reduce wind drag but there are no button door “presenters,” as on the Ford Mustang Mach-E.

The cab-forward design takes advantage of the MEB layout, with room for batteries and motors under the floorboards. The ID.4 is about 4 inches shorter than the conventionally powered Tiguan, though its wheelbase is barely an inch shorter. This design approach yields space normally taken up by the engine compartment.

As cautious as Volkswagen designers were with the ID.4 exterior, they really opened up inside, so to speak. This space is decidedly high tech. It’s also surprisingly roomy, especially in the back seat. That’s the benefit of pushing the cabin forward.

There are twin screens, one handling infotainment duties, the other replacing conventional gauges. The reconfigurable display floats over the steering wheel, rather than anchoring to the instrument panel. It actually makes the screen easier to see, however, you move your seating position.

The steering wheel has high-tech haptic controls built-in. They’re reasonably easy to use once you figure out whether to tap, slide – or just work with the main infotainment screen atop the center stack.

This is one of the more controversial moves VW made with the ID.4. The infotainment screen gives a motorist a lot of control over the vehicle – and adding BEV-unique functions like tracking down charging stations. But it’s not immediately intuitive, something I’ll expand upon shortly.

Indeed, there are a number of things that are curiously problematic. Looking to put on the rear defrost or maximum air? Those are about the only traditional buttons in the ID.4 – but they’re tucked away on the left side of the steering wheel. Then there’s the fact that there only two window switches available on the driver’s left armrest. Odd for a four-door. It actually operates all four windows but you have to tap a button to get it to switch from front to rear. It didn’t always work first try.

Overall, the VW ID.4 cabin has a pleasant look with a hint of Jetsons to it. Seating is comfortable and the flat load floor further improves legroom.

The electric SUV launches with a single, rear-mounted AC permanent-magnet synchronous motor making 201 horsepower and 228 pound-feet of torque. The motor will draw power from an 82 kilowatt-hour battery pack estimated to deliver an EPA-rated 250 miles per charge. The all-wheel-drive version coming later this year will boost output to 302 hp, VW said at the ID.4 rollout last year.

The automaker hasn’t provided numbers but various reviews – and our own test – indicate motorists will see 0-60 times of 7.5 to 8 seconds. Power comes on quicker than those numbers suggest. Electric motors make maximum torque the moment they start spinning, so there’s a nice push-you-into-the-seat launch feel.

As with all modern BEVs, the ID.4 uses blended brakes that start by regenerating energy lost by slowing down, transferring it back to the battery to extend range. Conventional brakes supplement regen. The braking package needs a little work, likely in the form of new coding by VW since the drive-by-wire system can be updated using the SUV’s over-the-aid update capabilities.

The 82 kilowatt-lithium-ion battery needs 7.5 hours to charge on 240 volt current. If you’ve got access to one of the newer public fast chargers rated 125 kilowatts or above you’ll go from a 5% state-of-charge to 80% in 38 minutes.

The new Volkswagen ID.4 loads up all the cabin technology you’d expect of this type of battery-electric vehicle. The touchscreen is the interior anchor as it operates virtually everything short of those climate buttons to the left of the wheel.

Those comfortable with navigating complex smartphone apps should adapt quickly. The good news is that the touchscreen gives you access to an amazing number of ways to adjust vehicle settings. But it can require you to navigate several layers down into sometimes confusing options. Want to turn on the front defrost or start the A/C? There actually are alternate climate control menus, including a standard layout. It can help if the techie alternative is too intimidating.

In general, the various ways of interfacing with the ID.4 can be challenging. If you figure it all out, it’s going to really connect with techies.

One of the odder things to adapt to with the ID.4 is the fact that you don’t actually have to start the SUV manually. It recognizes your key fob and gets ready. Tap the brake pedal and you’re ready to roll. What would normally be a start button, on the side of the steering wheel, let’s you reduce energy use by putting the vehicle in “accessory mode.”

The unusual, rocking shifter has both standard D, as well as a B mode. The latter increases battery regen when engaged. It’s like driving a gas car with the transmission shifted down a gear or two – but here increasing range. It also let’s you “one-pedal” drive, since you immediately scrub off some speed just by easing back on the throttle.

As with all the latest BEVs, the skateboard layout offers an unexpected advantage. Though the battery pack is hefty, it actually lowers the ID.4’s center of gravity. It is no Golf R, but it offers a reasonable take on the classic Volkswagen drive feel. It corners better than you expect, and it’s a kick to feel the electric motors instantly spool up when you’re back on the throttle.

My trip up to the Upper Peninsula allowed me to experience the ID.4 under the most hostile of conditions. The wind at the test center was steady at 21 mph. A nasty sleet was on and off. And the conditions took a normally slippery ice course and made it as slick as you get outside a lab.

The rear-drive-only First Edition proved to be unexpectedly sure-footed. Sure, it took a lot of work to blast down the ice, weaving in and out between cones. But I didn’t kill one of them during repeated runs, building up speed each time.

As a footnote, I tried the test again, this time turning off the car’s electronic stability control. This time, I could barely make it down the course, at less than half the speed, suddenly launching into a series of 360-degree turns when I tried to head back to the starting line.

The Volkswagen ID.4 is the latest entry into the emerging battery-electric vehicle market. It follows last year’s launch of the Ford Mustang Mach-E and coincides with the debut of Chevrolet’s new Bolt EUV and the refreshed Bolt EV. The new VW model will, of course, be cross-shopped against the Tesla Model Y. 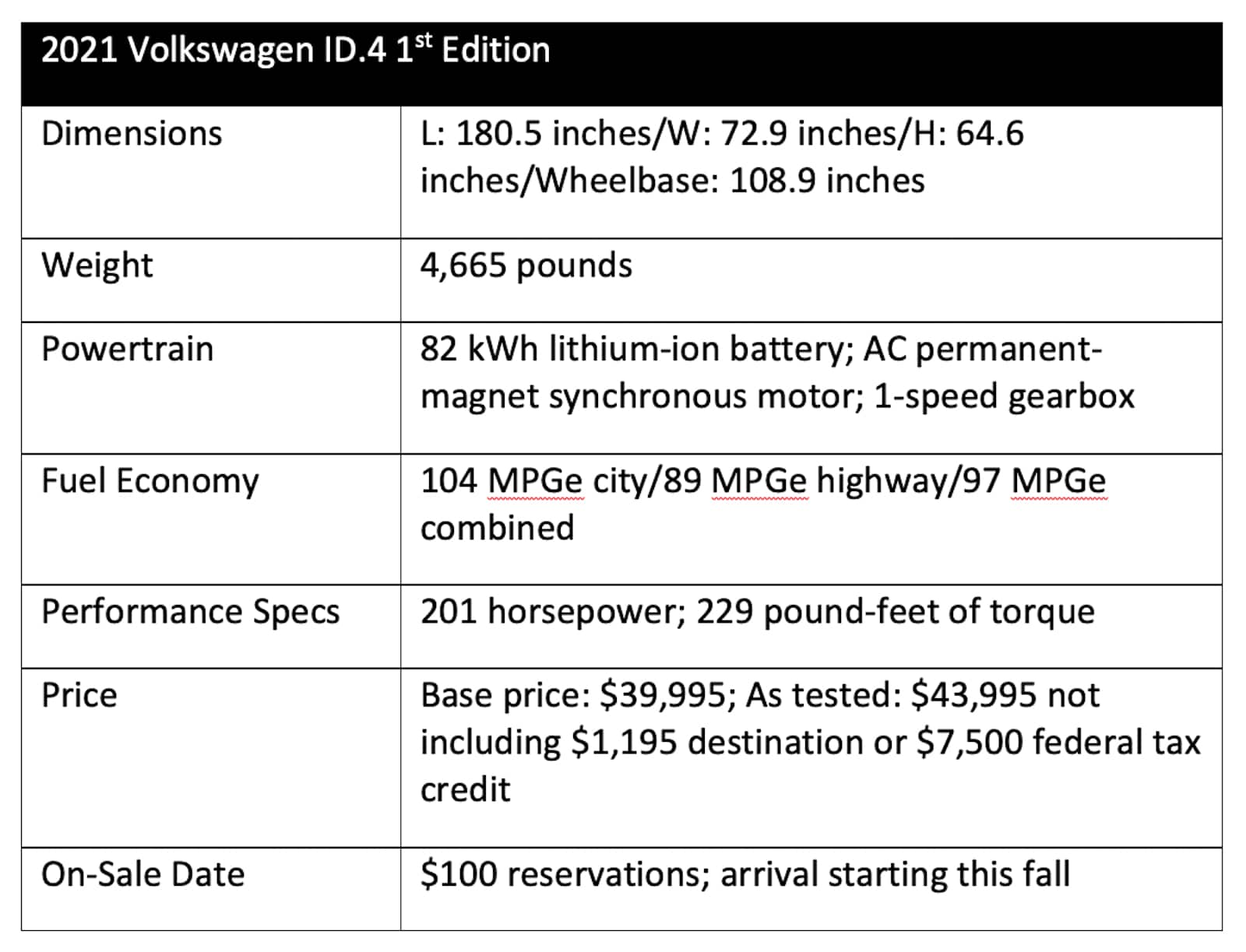 The ID.4 is one of the more affordable entries, with the base car starting around $40,000, and my First Edition coming in at $44,000 before options. The good news is that VW buyers still qualify for up to $7,500 in federal tax credits.

A more expensive, all-wheel-drive version will follow later this year. In 2023, meanwhile, VW will add production of the ID.4 at its newly expanded plant in Chattanooga, Tennessee. At that time, the automaker plans to introduce a new entry-level version of the SUV to start at $32,500.

After spending a reasonable amount of time in the new VW electric I can say it is an offering buyers in this segment should consider. While Tesla and Ford offer longer range with their competing, albeit more expensive, products the ID.4’s range of 250 miles is adequate for most potential buyers. The SUVs exterior design is appealing, with just a hint of flash. The cabin has a solid cool factor, though the car’s control tech can be daunting.

The smaller ID.3 is already drawing solid numbers in Europe and, despite some gripes, I’d expect the larger Volkswagen ID.4 to generate good business here, as well. 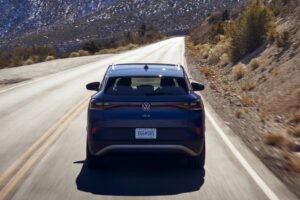 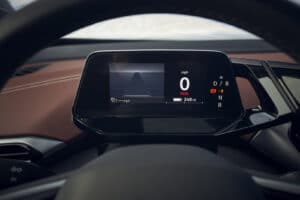 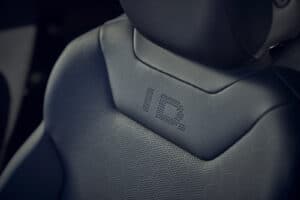