After two decades away, the Toyota Supra sports car returned for 2020, sharing its major components with the 2020 BMW Z4. The move saved both automakers boatloads of cash given both models sell in low numbers — the GR Supra sold 5,887 copies last year; the Z4 2,371.

But there was another reason Toyota looked to BMW. Previous Supras were powered by a 3.0-liter inline-6, something considered a key part of the Supra’s personality. But Toyota no longer built one. Only one automaker did: BMW.

Given the need to make the new GR Supra profitable, co-developing the car with BMW made economic sense, even if the Supra faithful struggled to overlook the car’s Bavarian bloodlines — it’s built by Magna Steyr in Austria, not Japan.

And so comes 2021, and with it a host of updates, including a 14% boost in horsepower thanks to a number of upgrades throughout the engine. But Toyota is also offering a new 2.0-liter inline turbocharged 4-cylinder engine that shares much of its makeup with its larger sibling.

Toyota has also retuned the chassis to increase roll resistance and enhance cornering ability, while retuning the suspension dampers and bump stops. The electric power steering’s programming was revised along with the adaptive variable suspension, vehicle stability control and active differential.

“… Co-developing the car with BMW made economic sense, even if the Supra faithful had a hard time overlooking the car’s Bavarian bloodlines …”

The black Alcantara leather-trimmed interior with blue contrast is exclusive, as are the exclusive key gloves

and trunk mat. Other models include the 2.0, 3.0, and 3.0 Premium. All GR Supras come with a one-year membership to the National Auto Sport Association, and a complimentary day at a high-performance driving venue.

Finished in Nitro Yellow, our test car was not suited for those in the witness protection program. The $425 option accentuates the car’s bulbous styling and numerous gills and grilles. You’d never call it pretty, but you might call it something else. Still, styling is a personal taste, and the car did receive a number of thumbs up.

The interior is cozy, very cozy. OK, it’s snug, and fitted with BMW buttons, gauges and controls. Nevertheless, overall ambience seems a noticeable step down from the Z4’s interior, although it is well-assembled and everything seemed to be of high quality. The seats are well bolstered and comfortable during long trips in the saddle.

Cabin storage space is skimpy; there’s no center console bin, and the map pockets are small and shallow. There is more than a little engine and tire noise, but this is a sports car, and that’s to be expected. Thankfully the din doesn’t overpower the excellent audio system. Cargo space is adequate at a little over 10 cubic feet. It can fit a couple duffle bags, or small suitcases.

The GR Supra’s turbocharged 3.0-liter inline-6 sees a significant bump in power, rising from 335 horsepower to 382 horsepower, while torque increases from 365 pound-feet to 368 pound-feet. This drops its 0-60 acceleration time to 3.9 seconds from 4.1 seconds. An 8-speed automatic and rear-wheel drive are standard.

The GR Supra comes with an 8-inch touchscreen that’s also controlled by console-mounted buttons and controller. It’s basically a facelifted version of BMW’s iDrive, and vastly superior to anything Toyota offers. Wireless Apple CarPlay is optional; Android Auto capability is not available. 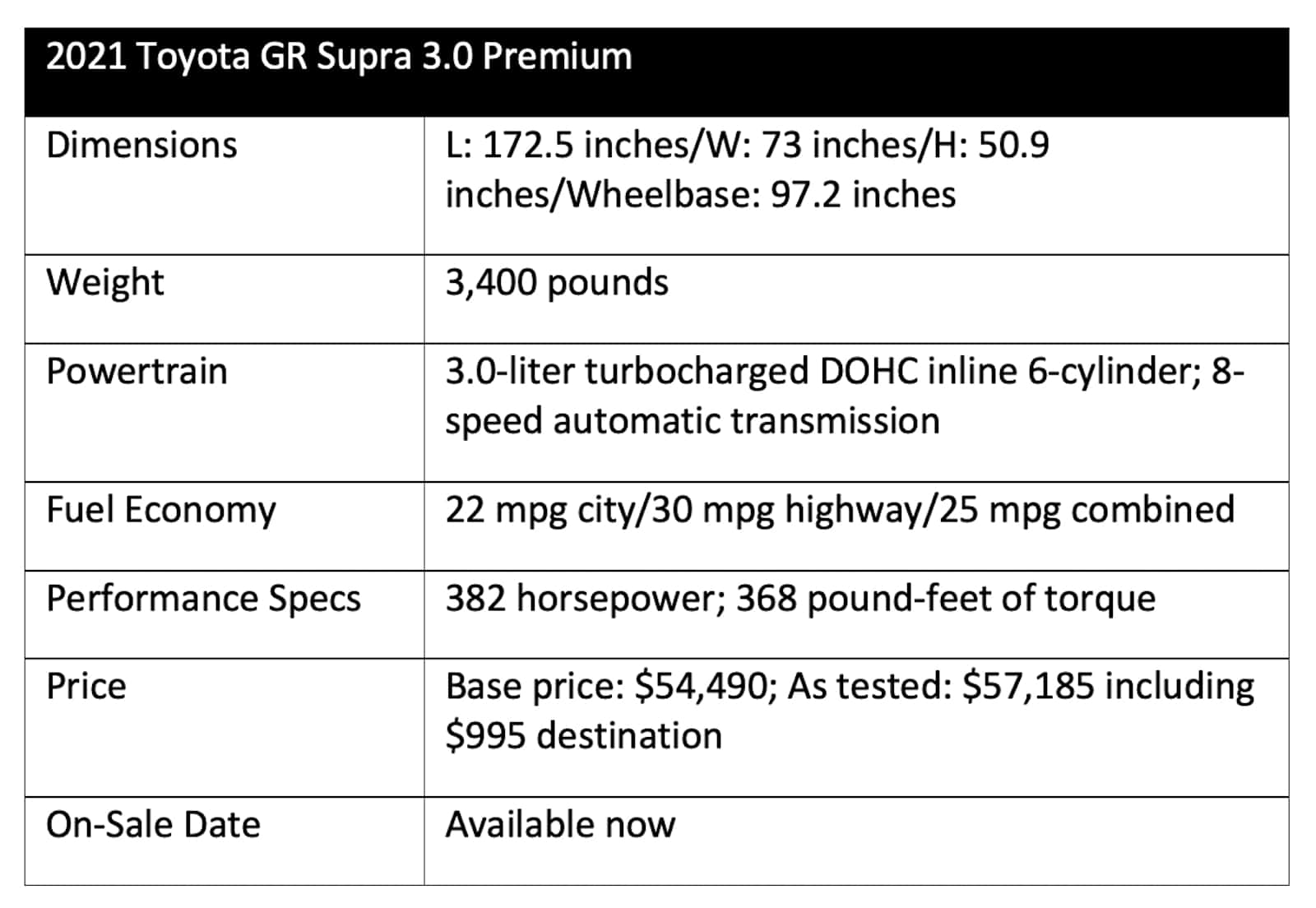 The 2021 GR Supra is an absolute blast to drive. Steering is crisp and quick, acceleration is invigorating. The retuned suspension is a big improvement from 2020, easily absorbing the worst America’s crumbling arteries dish out without transmitting much turbulence to the driver.

Given the cabin’s tight confines, this is a car you strap on as much as climb into. Its natural feel is an extension of you, with a speed and athleticism that makes for an exhilarating experience. That said, the car’s styling eliminates any over-the-shoulder visibility, which calls for extra care when changing lanes.

The 2021 Toyota GR Supra 3.0 Premium is noticeably improved for its sophomore year, and the added juice makes for an even more entertaining ride behind the wheel. And once inside, you don’t have to look at the exterior. Of course, the GR Supra’s performance is so beautifully tuned, it looks better every time you drive it.