If you want proof that we live in some of the least imaginative times ever, consider that three-quarters of all U.S. light vehicle sales are something drably utilitarian, be it an SUV, minivan or pickup truck.

In an era when the demand for traditional cars is shrinking faster than the ozone layer, the 2021 Rolls-Royce Wraith Black Badge is indeed a rare jewel: a full-size grand-touring luxury coupe.

It disavows the notion that form follows function, that modern design edict that has robbed so much of our product design of its exuberance, romance and sense of wonder. Here function follows form. No, it’s not sensible; that’s what economy cars and are for.

After all, no one buys a Rolls-Royce to avoid walking, or because it makes sense. You buy it because of its stunning sense of self, its uniqueness as an object. It’s an indulgent automotive bauble for someone who knows how to reward themselves for a life well played.

For 2021, the Wraith carries over unchanged, but given how few are sold each year, there’s little reason for year-to-year revisions. There is a plethora of design details that can be changed to fit your style, which explains the $125,900 in options, the biggest of which is for the $50,000 Black Badge Package.

This version comes with an extra 37 pound-feet of torque, a sport-tuned exhaust, 21-inch carbon-alloy composite wheels, along with the requisite exterior black detailing, and dark chrome applied to the grill and the Spirit of Ecstasy hood ornament. Inside, there’s carbon fiber where you’d normally see wood, a full-grain leather interior, ventilated front seats, and contrast stitching.

The Black Badge’s smoked chrome trim did lower the Wraith’s visual volume, which was offset by its Adriatic Blue paint job. This is one huge two-door coupe, at nearly 208 inches long with a 122.5-inch wheelbase.

But that length lends its lines a gracefulness missing in modern car design. Surfaces have sophisticated clean look that’s refreshing. Then again, its rear-hinged doors, a decidedly retro touch that only Rolls-Royce offers, distinguish it from every other car in the market, ensuring you’ll always make a memorable appearance when you arrive anywhere.

There are many remarkable things about the Wraith’s cabin, but it’s most memorable feature is the optional $17,500 Shooting Star Headliner, which uses LED lighting to mimic a starlit sky with shooting stars. It’s just one of the over-the-top interior bits that make the Wraith so desirable, like its incredibly plush lamb’s wool floormats, a $1,575 treat for your feet.

“… No one buys a Rolls-Royce Wraith because you want to avoid walking, or because it makes sense. You buy it because of its stunning sense of self, its uniqueness as an object …”

Then there are the power door closers that shut the rear-hinged doors once you’ve inside, and a motorized door that hides the infotainment screen when the car shuts off. There’s even a “Power Reserve” gauge, a sort of inverse tachometer that shows how much engine power you have remaining. The interior is exquisitely finished, with every surface or component feeling of far better quality than in other cars. Both front and rear seats have a center console, and all four seating positions have their own automatic climate controls.

A car that makes this much of a statement needs an engine to match, and that would be a twin-turbocharged 6.6-liter V-12 with an 8-speed automatic transmission that delivers 624 horsepower and 642 pound-feet of torque – 50 more than the standard Wraith to the rear wheels.

While you will get airbags, a bevy of parking cameras, and adaptive headlights, you’ll find that driver-assist systems like lane departure warning, adaptive cruise control, and a night-vision camera are optional, while others, such as blind spot assist or forward-collision mitigation, aren’t available.

While the Wraith does come with a 10.3-inch infotainment screen, operated by a controller on the center console along with shortcut buttons. Yes, there’s Bluetooth, audio streaming, Wi-Fi connectivity, a navigation system 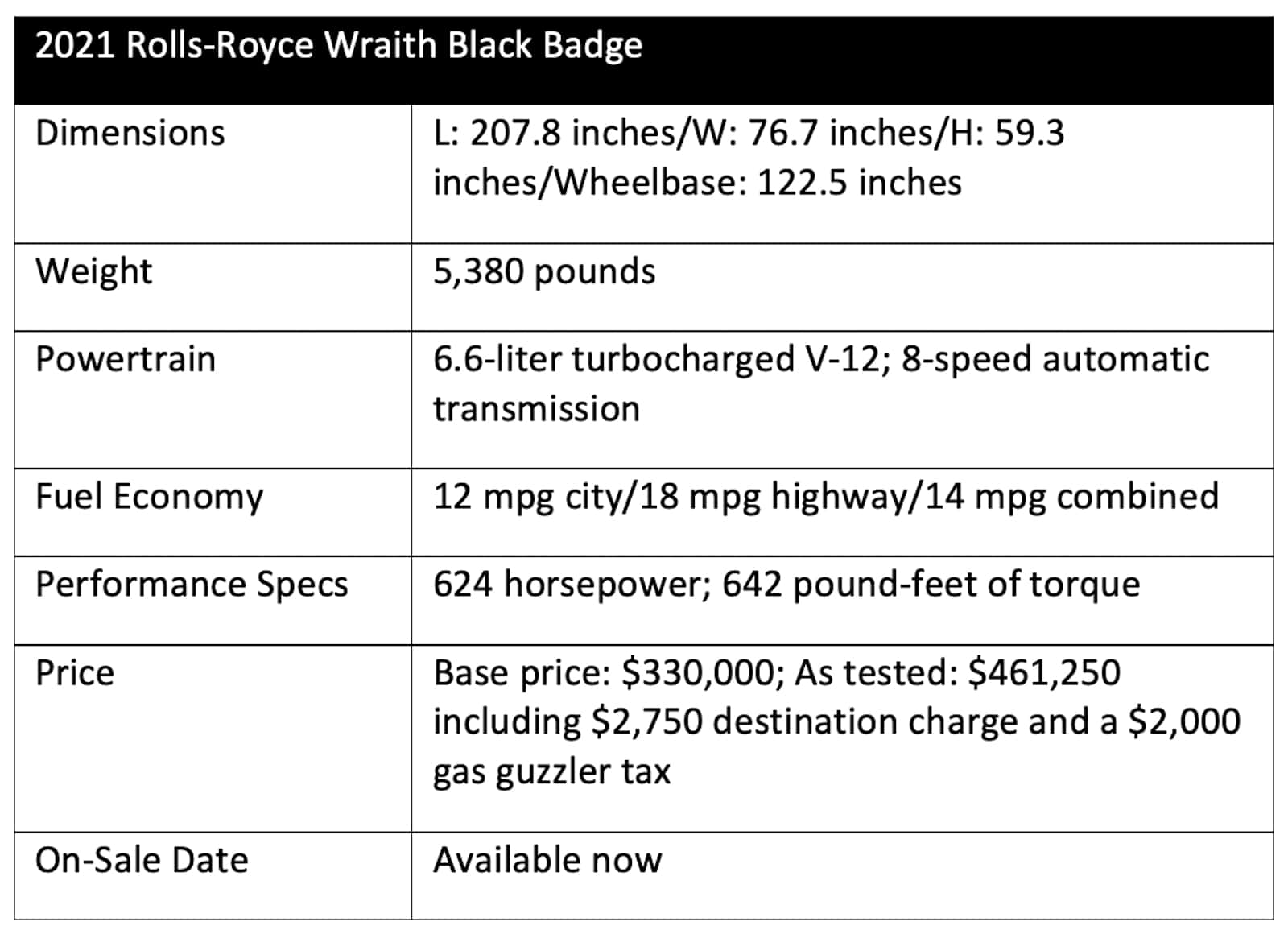 and an 18-speaker audio system. It lacks Apple CarPlay or Android Auto, but it does have a CD player, and a 20GB hard drive for storing music ripped from CDs or USB drives

When it comes time to drive, you’ll find the Wraith imparts a tranquility that makes for a relaxing ride. Its double wishbone front suspension and multilink rear suspension and self-levelling air springs with roll stabilization and variable damping control provide a ride that feels as if you’re floating above the fray. There is body lean during cornering, but it’s well controlled.

Overall, the Wraith has faster steering and a stiffer suspension than the Ghost, with which it shares its underpinnings, but you’ll never mistake it for being sporty. And it’s an easy drive for its size, something not always true of larger cars. Engine power is as overindulgent as the car itself, delivered in an uninterrupted smooth stream of power. Braking is impressive given this car’s size and weight.

A week spent with the Rolls-Royce Wraith is to experience a car that truly makes you feel as if you’ve entered another world. It imparts a special feeling that few cars do and is becoming increasingly unique in an industry that too often prioritizes sporty handling and cold-blooded functionalism at the expense of comfort, indulgence and uniqueness.