Is this the best of all worlds?

From the stock 911 to the heart-pounding GT3, few products are offered in more variations than the Porsche 911 — and for those who love the feeling of a breeze in their hair, 2021 brings two options with the return of the 911 Targa.

The original concept dates back to 1965, the German automaker unveiling a concept version at the Frankfurt Motor Show. Porsche, like other manufacturers, was worried that new U.S. safety standards would result in the banishment of classic convertibles. The prototype offered plenty of protection in the event of a rollover with its B-pillar “hoop,” while still allowing a motorist to enjoy driving al fresco.

Named in honor of the Targa Florio, the classic Sicilian race that Porsche long dominated, the 911 Targa has gone through numerous changes since production launched in 1967. The original, pop-out plastic rear window is now a fixed glass design, a complex mechanical system tucking the T-top-style roof panel under the rear engine cover.

It takes barely 20 seconds to raise or lower the top on the 2021 Porsche 911 Targa. While it doesn’t completely envelope you in open air it markedly transforms the driving experience. Switch to Sport Mode and the roar of the electronically controlled exhaust system can be fully appreciated.

The Targa lets you enjoy the top-down experience even more than with the 911 Convertible in many ways. A buffer atop the windshield header minimizes cabin wind buffering. That makes it easier to enjoy at highway speeds, for one thing. With the side windows up, you can blast some heat to enjoy open-air driving on a cold winter’s day. For those of us in northern climes, that’s a real plus.

Now, enjoy the added security the Targa offers, much like the hardtop convertibles that have proliferated in recent years. But Porsche’s approach adds minimal weight — about 190 pounds compared with the coupe — and far less wind drag compared to a true convertible.

One of the drawbacks of a convertible is the impact a fold-down roof has on the purity of a design. For the most part, the 2021 Targa retains the strikingly handsome looks of the latest-generation 911. The most notable change is the silver “hoop” connecting the car’s B-pillars. While some find the addition awkward, others see it as enhancing the fundamental appeal of the 911 by functioning as a built-in roll bar.

If there’s one disappointment with the Teutonic construct it’s the fact that you can’t operate the top while moving, something you can do — albeit at slow speeds — with the 911 Convertible. That said, this is only a modest inconvenience. It takes less than 20 seconds to raise or lower the Targa top, according to my stopwatch. That’s quick enough to pull off the transition at a stoplight, even when stuck in heavy traffic.

One nice feature is the ability to remotely close the top using a button on your keyfob. It even coordinates with the 911’s built-in parking sensors to ensure it doesn’t accidentally hit something while operating.

With the top down you’ll experience only moderate buffeting in the cabin, while rolling up the side windows makes it a pleasant experience even at 70+ mph.

But for the addition of two buttons on the center console to operate the Targa roof, this is a classic Porsche 911 interior.

The thick, leather-wrapped steering wheel allows you to operate numerous vehicle functions, including a rotary selector to switch between vehicle modes.

It offers an unimpeded view of the retro-futuristic gauge cluster combining conventional tach and speedometer with digitally programmable features, such as a G-gauge that lets you track how you’re handling launches and corners.

A wide infotainment touchscreen dominates the center of the instrument panel. It also can be operated by voice or a knob to the right of the shifter making it easy to zoom in and out of a map. It serves multiple functions, among other things as a tuner knob when the screen is in radio mode. There’s also a classic volume control. And a line of switches just above the center climate control vent operate a handful of additional vehicle functions.

The shifter itself is a compact affair, fewer and fewer automakers retaining classic shifter designs. While it’s an electronic gearbox control, at least, it uses relatively conventional shift patterns. There are the de rigueur paddles on the steering wheel for those who like to row their own.

As for seating, the front buckets envelope you, holding driver and passenger firmly in place through even the most aggressive maneuvers. Don’t invite good friends to join you in what Porsche wistfully calls a back seat, however.

The biggest complaint? A severe lack of storage space, even for the now requisite smartphone that any Porsche owner is going to be carrying.

Porsche gives us two versions of the 911 Targa returning after a brief absence for the 2021 model year. That starts with the Targa 4 with its 3.0-liter twin-turbo flat 6 pushing out 379 horsepower and 331 pound-feet of torque to all four wheels.

The Carrera 4S I’ve been driving this past week bumps that to up 443 horsepower. That’s an impressive 23 hp and 22 lb-ft more than the prior generation. For those who want to take things even further, hang tight. We should see a Targa GTS join the line-up in the next year or so.

The Targa 4S can be ordered with a 7-speed manual. While the feel of a stick is a powerful draw, the reality is that the eight-speed Porsche PDK transmission simply cannot be outdone.

The full Sport Chrono package, at around $2,700, isn’t cheap. Leave it out and you’ll give up about 0.2 seconds on your launches.

Automakers are expected to load up with all the electronic bells and whistles in today’s world. Even sports car drivers now expect the latest in advanced driver safety technologies. The 2021 Porsche 911 Targa comes through. But be ready to load up the options as the German marque has a way of making just about everything you’d expect come as a (costly) option. That Burmeister Audio System? It’s $5,560. The Torque Vectoring Plus package will add another $1,500

to the bottom line.

Other options include InnoDrive, Porsche’s version of Traffic Jam Assist, sibling brand Audi’s low-speed, semi-autonomous system, a $3,020 option. At $280, Power Steering Plus is one of the rare checkboxes to not push into quad digits.

One of my favorite features is the optional Front Axle Lift which can raise or lower the nose by 1.5 inches. With the new Smartlift function it can be programmed to use GPS to know when to do so automatically. That’s a real plus if you have to deal with a steep garage or driveway approach that might otherwise scrape the front splitter.

With a weekend of rain in the forecast I headed out for a long morning’s drive through Hell, Michigan, the closest we come in the Great Lakes State to classic California back roads. The combination of tight corners, short straights and broken, off-camber pavement provides a perfect opportunity to push anything street-legal up to the limits. And the 2021 Porsche 911 Targa 4S came through with aplomb.

The boxer-6 engine comes as close as you can get to instantaneous torque without adding an electric boost system. Throttle response is not only quick but intuitive, making me feel like man and machine were one.

Switched to Sport or Sport Plus, it hunkers down and seldom shows even the slightest sign of breaking its grip.

On a particularly treacherous stretch of S-curves it felt almost like a stroll in the park until I looked down and saw just how fast I was going. What was particularly surprising is just how much faster the Targa wanted to go.

Yeah, there is some added weight because of that complex roof mechanism, but you’d be hard pressed to notice. The Targa did everything my hands and feet asked of it, with plenty of room to push still harder. 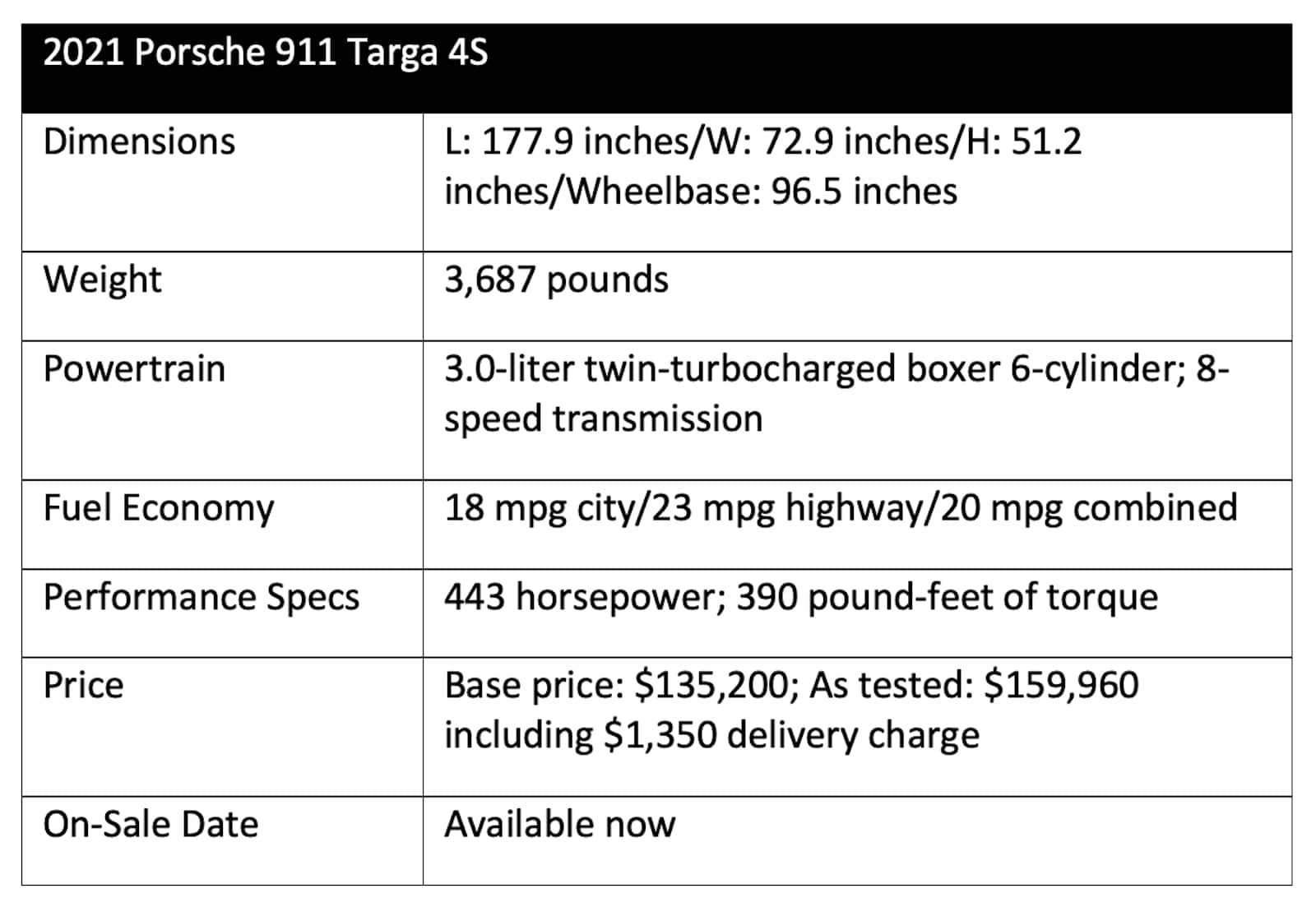 Those numbers run about $8,000 above comparable versions of the 911 Convertible. Even so, it’s not as big a jump as you might think, coming with most of the key options available with the 2021 Targa. Meanwhile, there’s also a limited-run special package, the Heritage Design Edition, at $180,600.

A half-century ago, Porsche might have launched the first Targa as the answer to a question never actually asked. Today, it fits a unique niche. What you get for the money is a sexy, savvy, solid sports car that combines the best of convertible and coupe into a single, high-performance package. 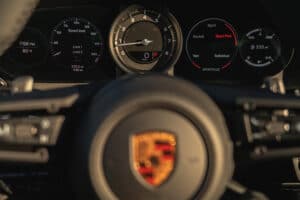 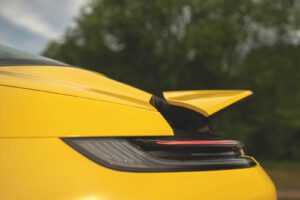 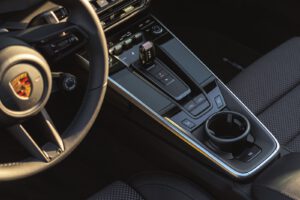