A Week With: 2021 Nissan Armada Platinum

Despite the new exterior styling, it still lags Detroit's offerings.

The phrase, “now more attractive” may not set hearts a flutter, but it’s the picture-perfect headline when speaking of the facelifted 2021 Nissan Armada.

Overview: The newest version of the big beast gets a host of updates that make it more appealing, but do little to alter its basic character as an oversized, if comfortable, 3-row full-size SUV that outsells the Toyota Sequoia but not its competition from Detroit.

Once more offered in SV, SL and Platinum grades for 2021, Nissan’s largest SUV retains the body-on-frame architecture and driveline, nearly a decade old, that it inherited from the overseas-only Nissan Patrol, but its enhancements make the Armada a more tempting proposition.

(Nissan sends in the Armada with fresh new look for 2021.)

Exterior: Never a stunning beauty, the Armada’s new front fenders, bumper and LED headlights frame a huge rendition of Nissan’s V-Motion grille that banish the pudgy, droopy look of the previous Armada, although much of its soggy soft style can be seen in the middle of the vehicle, which remains unchanged.

In the rear, redesigned taillamps along with gloss black and chrome trim and a revised bumper seem far more tailored than before. Overall, when compared to the previous Armada’s more subdued melting ice cream style, the new version imparts a serious, rugged presence that looks good alongside its stablemate, the Nissan Titan pickup.

The dark-painted roof rails hold up to 220 pounds, plus an acoustic windshield and front side windows keep out unwanted noise. An optional Midnight Edition gives the Armada a murdered-out look with black exterior logos, side mirrors, roof rails, grille, and front and rear skid plates.

Interior: It’s a big step up to access the Armada’s interior, where you’ll find room for up to eight, although The Captain’s Chairs Seat Package offered on mid-level SL and top-of-the-line Platinum Armadas replaces the second-row bench seat.

The first two rows are spacious, with bountiful head and leg room. Opting for the second-row captain’s chairs also nets you a very spacious console, with multiple storage compartments. Our Platinum test ute’s quilted leather-trimmed seats were the perfect combination of firm support and cushy comfort. The third row has decent leg space, but the low seat-bottom cushion forces your knees skyward. It’s best left to kids or folded down for additional cargo space.

However, you’ll find the second-row bench a better bet if you regularly haul lots of cargo. Like the third-row bench seat, it folds flat into the floor, providing 95.6 cubic feet of cargo space, as opposed to the 16.5 cubic feet offered with all seats upright, or 49.9 cubic feet with the third row folded.

If you regularly haul rugrats, you might consider the rear-seat entertainment system with two 8-inch monitors, an HDMI input, remote, two USB ports and two pairs of wireless headphones. Up front, you’ll find a USB-A and a USB-C port, as well as a large wireless charging mat tucked behind a closed door.

Powertrain: The heart of the Armada remains unchanged, and that’s not necessarily bad where Nissan’s familiar 5.6-liter double-overhead-cam “Endurance” V-8 generating 400 horsepower and 413 pound-feet of torque through a 7-speed automatic transmission with manual mode. That’s an increase of 10 horsepower and 19 pound-feet of torque from 2020 through the rear wheels or all four.

Its all-steel platform features a fully boxed frame, a 4-wheel independent double wishbone suspension, and can tow up to 8,500 pounds of your favorite lifestyle accessory and far more safely, thanks to the addition of a standard integrated trailer brake, trailer sway control, and a tow-hitch receiver.

Fuel economy is as dismal as you’d expect: 14 mpg in city driving, 19 mpg highway and 16 mpg combined for rear-wheel drive models, with all-wheel drive models coming in 1 mpg lower in each measurement, which was the case for our tester.

Technology and Safety: For most buyers, the most important feature in any new vehicle is the infotainment screen, and in that regard, the Armada does not disappoint. With a standard 12.3-inch infotainment screen, it’s a big improvement over the 8-inch screen previously used. As you might expect, wireless Apple CarPlay is standard, but oddly, Android Auto is wired. A Wi-Fi hotspot is standard; wireless smartphone charging is optional. In addition, a 7-inch display is included in the driver’s instrument cluster. 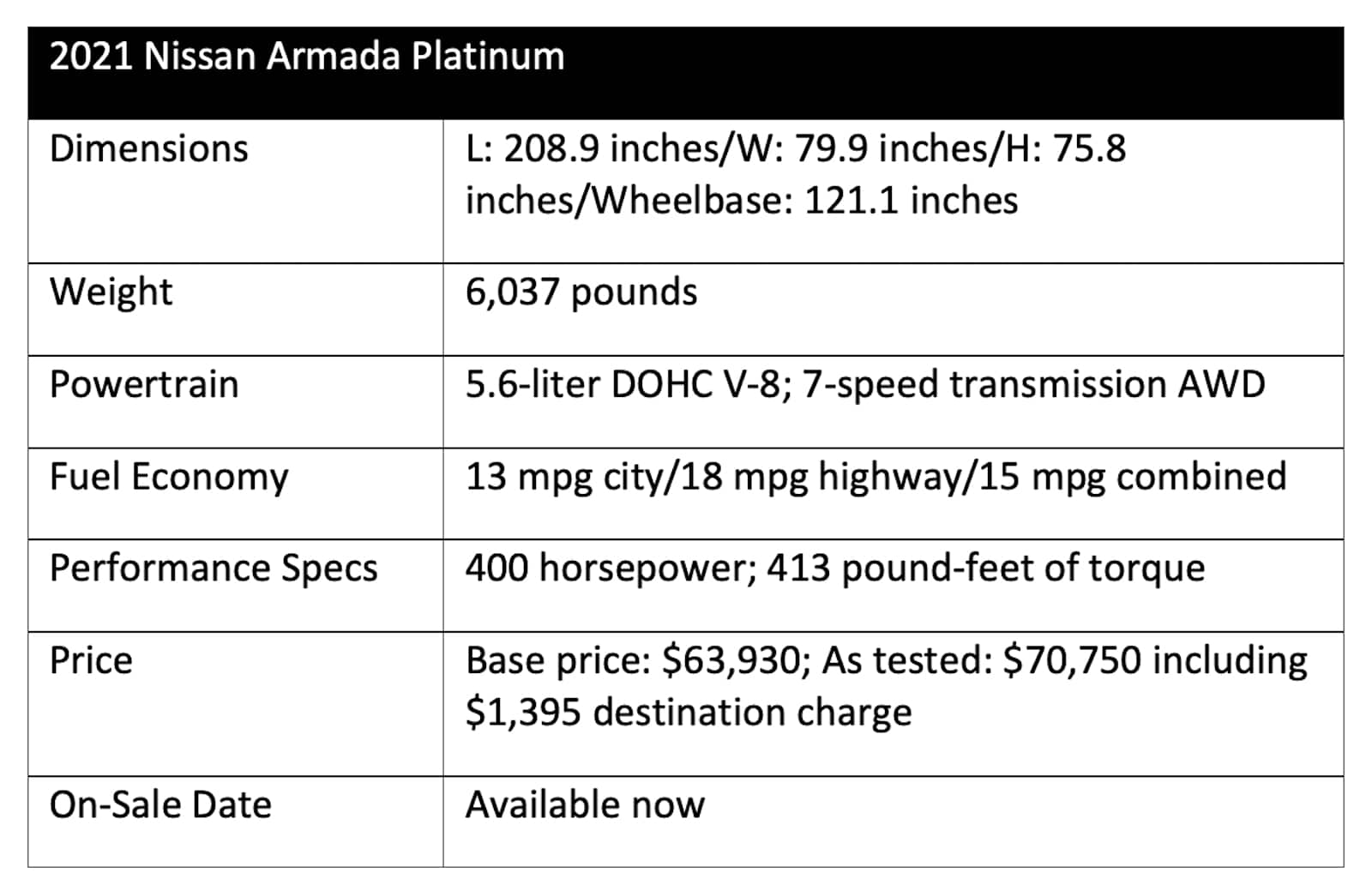 New for 2021 is “Rear Door Alert,” which reminds drivers to look for forgotten items in the rear seat — most importantly small children. The standard “intelligent rearview mirror” has a higher resolution and is 50% larger. The mirror improves rear visibility by visually removing obstacles such as oversize cargo and rear headrests. A 360-degree monitor, and remote engine starting are optional.

Driving impressions: The Armada’s V-8 proves more than powerful enough to motivate this behemoth. As you’d expect, there’s lots of compliance in the suspension which lends to its good ride, but does cause some rebounding body motions after traversing bumps.

This makes for a very comfortable ride, but makes it feel as large as a Spanish galleon when lumbering around town, despite the independent suspension.

Part of this is due to the light, slow, numb steering at low speeds, which finds the driver cranking the wheel when making even a minor turn. It just makes the Armada feel larger and clumsier, but this is pretty typical of the breed. Thankfully, the Armada proves to be very quiet as well.

Wrap Up: Nissan’s update of the Armada makes it far more competitive than the outgoing model, and the Platinum trim level is positively lavish. But there’s nothing compelling enough about the Armada to make you opt for one over a anything other than the long-in-the-tooth Toyota Sequoia or Land Cruiser. Until the Armada receives, drop-dead gorgeous styling, it’s place near the bottom of the segment seems secure. 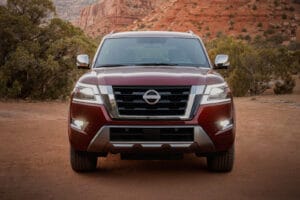 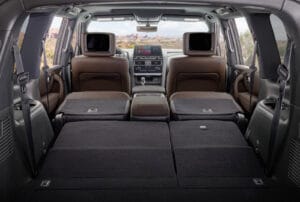 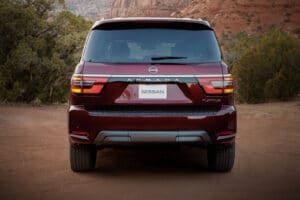 2 responses to “A Week With: 2021 Nissan Armada Platinum”