A wagon by any other name — is still a great alternative to an SUV.

Thick patches of fog roll over the highway as I head north towards Michigan’s Upper Peninsula. The eerie scene is broken up by sudden fits of freezing rain and snow, a reminder that in the Midwest winter is far from over — no matter what the calendar shows.

If I have to be out on the road this March afternoon, there are few vehicles I’d rather be driving more than this 2021 Mercedes-Benz E 450 4Matic All-Terrain. “All-Terrain” is a fancy way of saying “wagon.” In today’s SUV-crazed market, it’s almost an afterthought but, for those familiar with its virtues, it’s perhaps the most appealing version of the Mercedes E-Class.

There was a time when station wagons ruled America’s highways. Today, they’re all but forgotten, almost as rare as unicorns. Only a handful of manufacturers still offer this body style, primarily the Germans. And for 2021, Mercedes has given this two-box design a completely makeover – like the rest of the E-Series. But there are reasons why some folks might find the All-Terrain a particularly attractive take on the midsize line.

The All-Terrain gets a new engine, standard air suspension, a much more modern cabin and plenty of new tech features, such as the MBUX voice assistant. Lifting a page from the Volvo “cross country” handbook, the wagon now gets dressed up with some additional chrome, as well as plastic cladding, to give it a slightly more SUV-like appearance.

If that’s what it takes, well, fine. But with its great performance, roomy cabin and cargo bay, as well as its luxurious appointments, the 2021 Mercedes-Benz E 450 4Matic All-Terrain is a vehicle a lot more potential buyers should be checking out.

Spot the E450 All-Terrain in your rearview mirror and you’ll likely assume it’s the new E-Class sedan. Both body styles share the same twin-bar grille framing an oversized Mercedes tri-star logo. The lower grille has a menacing scowl to it, befitting the power of the new 3.0-liter engine under the hood. In case you miss that hint, there’s a new power bulge on the long hood. The headlights, bumpers and taillights also have been tweaked, ever so slightly.

It’s when you see the All-Terrain in profile that you recognize what’s driving by. The coupe-like curve of the sedan now continues flowing all the way back to the power-operated liftgate. The roll of the roofline is modest, however, to avoid cramping headroom and cargo space — a mistake made with some other recent wagon designs.

Wagon aficionados worried Mercedes might not bring the body style back to the States when it was time to remake the E-Class this year. The German automaker decided there was enough of a market to justify its return.

To attract new buyers, however, it took some tips from competitors like Volvo and Subaru, adding some SUV detailing to the design — notably some cladding to the wheel  arches. The All-Terrain also rides 1.2 inches higher than the old wagon.

Slip behind the steering wheel and what you’ll see is stock E-Class gauges and controls, starting with the 12.3-inch reconfigurable digital gauge cluster, it flows seamlessly into a similarly sized touchscreen infotainment display. The instrument panel has an organic curve to it and, with my test vehicle, was finished in elegant open-pore wood and double-stitched leather.

The 2021 model’s steering wheel features new, capacitive-touch controls. It takes a minute or two to get used to them but then they become natural to operate, especially with the haptic feedback they provide.

Mercedes maintained conventional controls for key climate control functions. One of the big moves was the elimination of the familiar rotary COMAND knob on the center console, the new E-Class wagon relying solely on a laptop computer-style touchpad to operate the infotainment system.

The layout of the cabin, overall, is elegant and refined, with niceties like the center storage bin with its butterfly doors. The seats offer seemingly endless adjustments, as well as a massage function that I found especially welcome after a couple hours of driving through a late winter mess.

With 98 cubic feet in the passenger compartment, the All-Terrain is roomy enough for passengers to relax on a long trip. And there’s plenty of space to bring along everything they might need. The wagon boasts a cavernous 35 cubic feet of cargo space with the back row up. That jumps to 64 cf when folded down.

For 2021, Mercedes abandoned the twin-turbo offered in the prior-generation E-Class wagon. It’s been replaced by a single-turbo inline-6. That might seem a step backwards but for the fact that the new, 3.0-liter package is supplemented by a 48-volt mild-hybrid assist system.

The electric starter/generator has several advantages. It functions as a smoother, quieter stop/start system. It also kicks in another 21 horsepower, when needed.

All told, the package churns out 362 horsepower and 369 pound-feet of torque through a 9-speed gearbox. That’s then directed to all four wheels through a rear-biased version of the Mercedes 4Matic system.

The new drivetrain is both a couple tenths quicker than the outgoing model, at around 4.5 seconds 0-60, and more fuel efficient. The EPA rates the wagon at 22 mpg city, 28 highway and 24 combined. My own experience found that to be roughly in line with what was actually delivered after logging more than 800 miles over the course of a week.

Better yet, with its large gas tank the All-Terrain displayed more than 500 miles of range following a fill up, more than enough to drive from Detroit to Sault Ste. Marie and then wander the back roads of the Upper Peninsula before having to fill up again.

In today’s automotive world, technology has become a critical differentiator between brands and product segments. Mercedes is determined to retain its lofty perch by loading up products with a wealth of high-tech features.

Some of these are practical, like the adaptive damping system with air springs at every corner. (The outgoing wagon used them only in the rear.)

The design and layout of the twin IP displays was beautifully executed. And I was particularly impressed by the optional head-up display on my test vehicle. The system uses augmented reality, or AR, to enhance the wagon’s built-in navigation system. As you approach an interaction it makes it easier to spot where you are going. The reconfigurable gauge cluster, meanwhile, pops up a real-time image using a forward-facing camera that precisely flags where to turn.

Mercedes was one of the first automakers to introduce a programmable infotainment system. It’s tinkered with the user interface over the years, with various approaches using a mix of rotary knobs and touchpads. To my mind, the 2021 model steps back a bit by deleting the knob and opting solely for a touchpad – though the 12.3-inch display also recognizes touch. It’s just not as easy to do some things, such as zooming in and out on a map.

The 2021 E-Class gets the automaker’s MBUX technology, an in-car alternative to Amazon’s Alexa voice assistant. The cloud-based system is a definite step up from the old Mercedes voice recognition system but it’s still not the equal of Alexa, Apple’s Siri or Google Home.

In terms of advanced driver assistance systems, the 2021 All-Terrain introduces plenty of useful features, Mercedes notes, including “Exit Warning Assist, extended restart functionality in stop-and-go traffic, and End-of-Traffic-Jam Assist, which works in tandem with LiveTraffic to recognize and respond to traffic jams and slow-moving traffic even before the driver becomes aware of them.”

Spending a week with a vehicle like the 2021 Mercedes-Benz E450 4Matic All-Terrain reveals a lot of things you just can’t learn in a day or two. Now, take yourself on a long ride through rapidly changing weather conditions and you get a truly intimate feel. So it was by the time I was ready — reluctantly — to turn back the keys to this wagon.

While not as tomb-quiet as, say, a Lexus, there was only a moderate amount of road and wind noise during the drive up north at speeds averaging in excess of 70 mph. And that vanished once we fired up the Burmeister audio system.

The new engine proved both satisfyingly quick, with plenty of power to execute passes, yet it was unexpectedly fuel efficient. The downside, of course, is the need for premium fuel.

The new air spring suspension soaked up most bumps, though the system could occasionally get a wee bit disturbed running across the sort of deeply potholed roads we suffer with at the end of every Michigan winter. Steering was precise and predictable. And, on the whole, the All-Terrain proved itself a delightful long-distance cruiser. 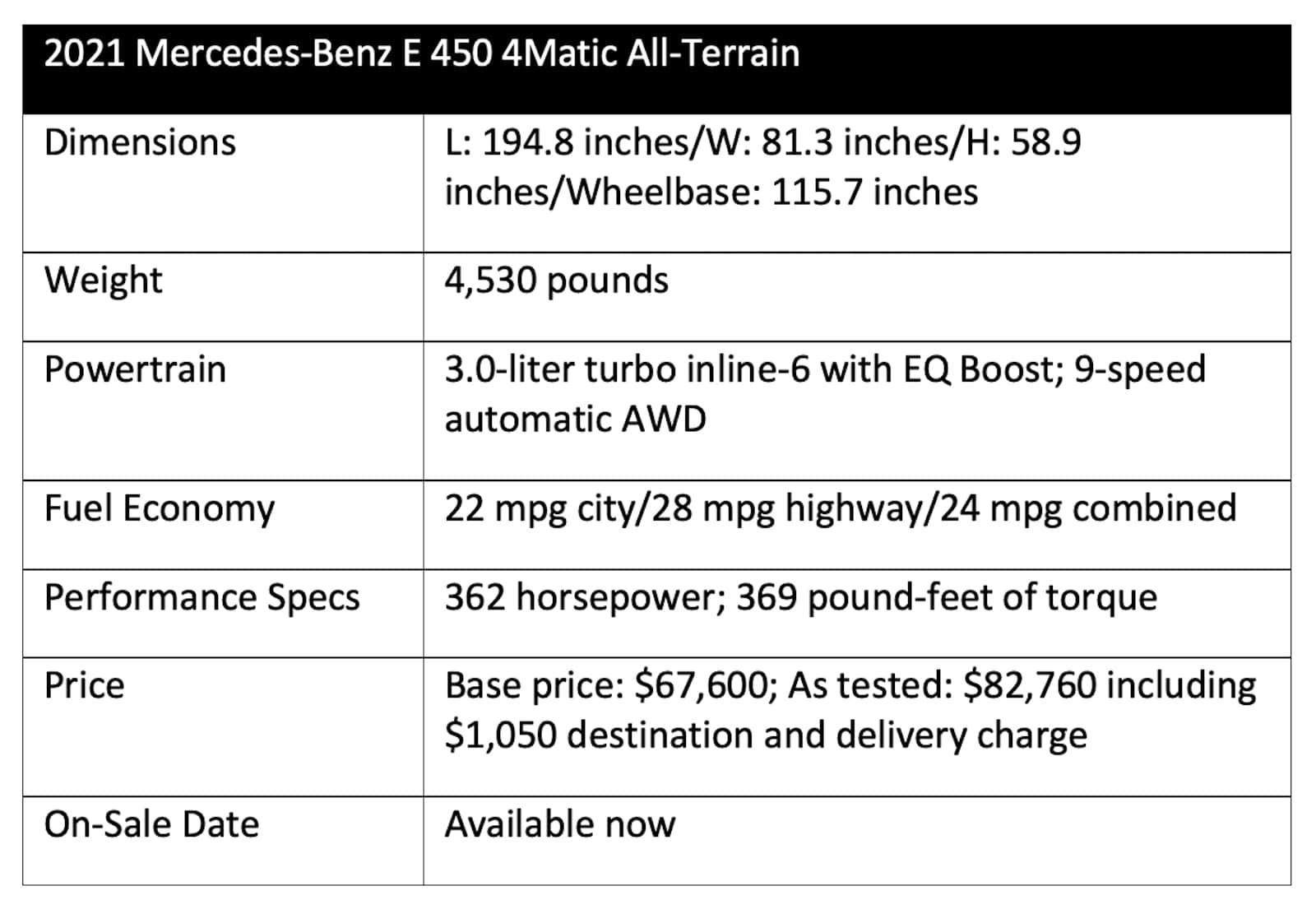 It’s been decades since wagons caught the fancy of the American motoring public. These days, it’s all about SUVs and CUVs. Mercedes itself has plenty to offer. But for those who aren’t addicted to following the latest trend, there are alternatives. And the 2021 Mercedes-Benz E 450 4Matic All-Terrain is a great one.

It retains many of the key visual attributes of the new E-Class sedan while adding a bit more ride height and, if that’s what tickles your fancy, some SUV-like cladding. It’s got great interior space and a huge cargo compartment. It’s also loaded up with all the latest technologies.

It doesn’t come cheap. The 2021 All-Terrain starts at $67,600 – before delivery fees. Our test vehicle jumped to $82,760 after loading on options like the augmented reality display, 19-inch five-spoke wheels, panoramic route and massaging seats. If you can make it fit into your budget, though, it was worth every penny.