There’s something about the way things sound in Italian. Who’d be interested in buying a model called the Cadillac Four Door, for example? But make it a Maserati Quattroporte and it becomes “una bella macchina,” a beautiful machine.

Of course, it helps to have all those seductively sensuous curves and creases that help make the Maserati Quattroporte S Q4 GranLusso a lot more than just mere, 4-door transportation.

Overview: The Quattroporte badge dates back to 1963, making this the longest-lived product line Maserati offers, albeit with breaks in production along the way. What might come as a surprise, considering just how fresh and modern the full-size premium luxury sedan looks, the underpinnings of the current model have been around since 2013.

That said, there’ve been some notable updates to the current model, including both exterior and interior revisions, the addition of some critical new technologies and a number of improvements to the Quattroporte’s powertrain line-up, including the twin-turbo V-6 in our S Q4 test vehicle.

One of the selling points for Maserati has been the use of Ferrari-derived engine technology at a relatively attainable price tag. Still, at a base price of $112,985, the Quattroporte S Q4 isn’t cheap, and we set out for a week of driving to see if it was worth the money.

Exterior: While less extreme than the products of Ferrari and Lamborghini, both hailing from factories just miles away from its Modena headquarters, the Maserati is anything but subdued. It boasts the classic curves you’d associate with Italian cinema sweethearts like Sophia Loren or Gina Lollobrigida, with straight lines hard to find.

“… The Quattroporte perpetually looks like a car ready to pounce …”

A wide ovoid grille meets the sweeping edge of a hood which, in turn, rises to meet the steeply raked windshield. The roofline is coupe-like, though tall enough to maintain good interior space for backseat passengers. The long nose, flared fenders and low stance provides a muscular appearance, enhanced by the short rear deck.

Other Maserati signatures, like the signature portholes up front and the brand’s trademark trident logo, add to the sedan’s distinctiveness, drawing constant attention and lots of waves and thumbs-up gestures.

Interior: When the sixth-generation Maserati Quattroporte debuted eight years ago, I felt that the interior came up a bit short of what I’d have expected from a car in this class. It was reasonably attractive, picking up on the sensuous shapes of the exterior, but somehow short of the refined feeling you’d expect in a class where it competes with the likes of the Mercedes-Benz S-Class and Audi A8.

Since then, there’ve been notable improvements in the overall refinement and detailing, especially the touchscreen infotainment system borrowed from what was, until recently, Fiat Chrysler. Though still an FCA package, the latest system is quicker and easier to use as well as more visually appealing.

From a traditional standpoint, I was impressed by the sumptuous Pieno Fiore leather and open-pore Radica wood trim, as well as the dark Alcantara on the S Q4’s pillars and headliner. Who’d believe you could make something so elegant out of recycled pop bottles. Credit goes to design house Ermenegildo Zegna for pulling together the automotive equivalent of a handmade, bespoke suit.

The biggest drawback to the Quattroporte is space which just doesn’t stand up to competitors like the S-Class, A8 or BMW 7-Series. You’re fine up front, but from a luxury buyer’s perspective, the backseat has almost a penalty box feel – all the more disappointing considering the $4,000 option price for our S Q4’s optional “comfort” seating package. And, if I’m airing gripes, Maserati, please find a bit more readily accessible storage space for my iPhone, as well as for an American-sized beverage container.

Powertrain: In its various forms and, in various markets, Maserati offers three different powertrains for the Quattroporte, including two gas engines and a diesel. That starts with a twin-turbo V-6 that, curiously, has its block cast to Ferrari specifications at a U.S. plant run by Stellantis (the merged Fiat Chrysler and PSA Group). The 3.0-liter V-6 makes anywhere from 350 horsepower and 369 pound-feet of torque in the base Quattroporte up to 424 hp and 428 lb-ft in our S Q4.

The S Q4, as the name signals, sends power to all four wheels, all other versions of the Quattroporte going with rear-wheel-drive. The top-line Trofeo, as well as the Quattroporte GTS, go with another Ferrari designed engine, this one a V-8 displacing 3.8 liters and, in part due to a flat-plane crank, punching out as much as 532 hp and 578 lb-ft.

All powertrains share an 8-speed automatic – with requisite steering wheel-mounted paddle shifters, of course. It’s a reasonably smooth and quick-shifting transmission but almost a bit behind the times considering key competitors have opted for 9- and 10-speed alternatives.

Stomp on the S Q4’s throttle and you’re greeted with a lovely growl, though not quite as rich as what the V-8 in the GTS and Trofeo produce. You’ll sink into the padded leather of the well-bolstered seat though, while in the 4.8 to 5-second range, 0-60, the S Q4 doesn’t quite match up to some of is German competition.

Technology and Safety: With the Quattroporte S Q4, Maserati clearly isn’t in the chase when it comes to technology. There’s none of the gesture controls found in the BMW 7 Series, nor the Hyperscreen of the recently unveiled Mercedes EQS. And, despite being an admitted geek when it comes to digital toys, I’m just fine with that.

There are some prerequisites these days. You can’t sell an entry-level anything without a screen, preferably touch controlled, and Bluetooth cellphone pairing and both Apple CarPlay and Android Auto are pretty much must-haves now, as well. They’re all found in the Quattroporte, along with a moderate level of advanced driver assistance systems, such as forward collision warning with automated emergency braking. Could it use wireless CarPlay and a few more USB ports, perhaps. One place Maserati got it right is with the optional Bowers & Wilkins sound system.

Drive Impressions: When you’re buying a sports sedan like this one, a lot of sins can be forgiven if it nails the driving experience. And here’s where our Quattroporte S Q4 really shined.

No, it’s not the fastest car in its class. But it is more than acceptably quick. And, while posting 0-60 times are essential elements in any review, the real measure of a sport sedan is far more experiential and ethereal.

It’s all about how you feel heading into tight corners, how confident you feel weaving your way on a narrow country road – or accelerating for a pass when the dotted lines are about to run out.

That’s where this Italian stallion really shines. The electronically controlled suspension is firm, especially in Sport Mode, without the jarring harshness you get with some German models set likewise. The steering is precise and predictable.

The Quattroporte rarely got upset even while pushing hard along the rough length of tarmac running down our favorite test route through the appropriately named Hell, Michigan. Even switched back to Comfort Mode I’d prefer the Quattroporte on that drive versus many of its competitors in Sport. 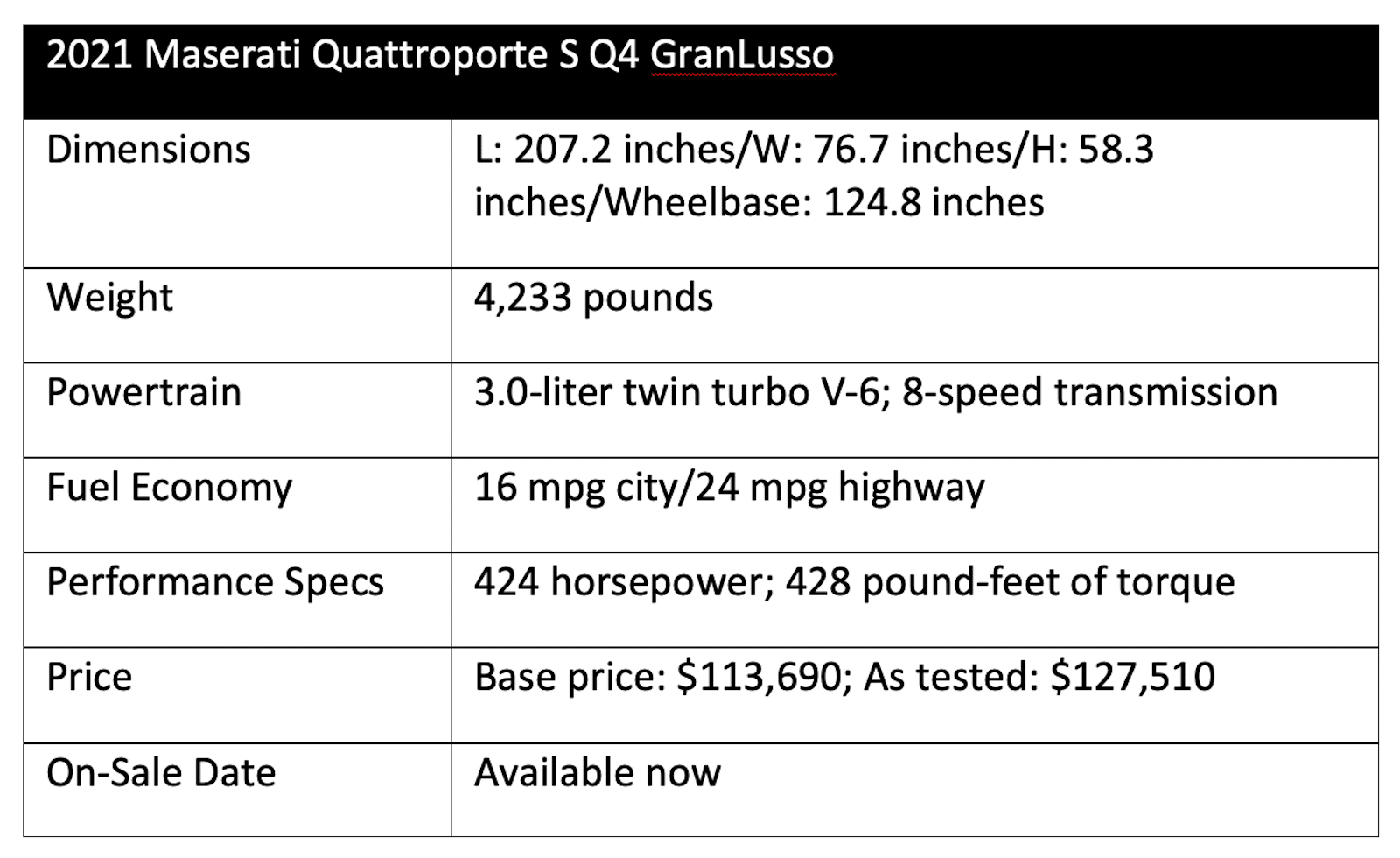 Wrap Up: From its head-turning looks to its sporty driving manner, there’s a lot to lust for when it comes to the Maserati Quattroporte S Q4 Gran Lusso. Just watching the way the eyes of pedestrians light up when you’re driving by adds to the appeal.

That said, there are some disappointments. Interior space is simply not up to key competitors And you certainly won’t go with the Maserati sedan if you’re looking for the latest in technology. Then there’s that price tag. Adding things like the rear “comfort” seats, the Bowers & Wilkins audio package and everything else brought our review car up to $127,510 – before taxes and delivery fees. It’s not cheap, but there’s also that intangible “exclusiveness” factor to work into the equation.

The Quattroporte isn’t a car for everyone, even those who can readily stroke a six-figure check. But, for many folks, that may be all the more reason to consider one. 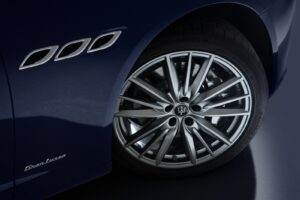 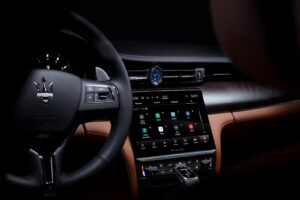 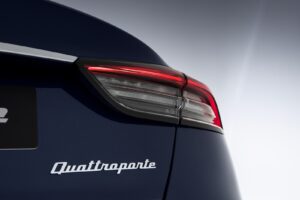