It had me at the first note. A deep, menacing roar that affirmed all the power lurking beneath the hood of the 2021 Lexus RC F Fuji Speedway Edition I was taking out for a first run.

Long known as the most staid of the import luxury brands, Lexus has made a concerted effort to put more passion and performance into its product line-up in recent years, and the original RC coupe that debuted for 2015 signaled the direction the luxury marque was going to take. Lexus has been relatively slow to make major changes to the line, though the introduction of the RC F model has taken it to a new level by bumping up power and improving the coupe’s handling.

Making 472 horsepower, the Lexus RC F can pose a real challenge to import alternatives like the Audi RS5 and Mercedes-AMG C63 coupe. Power comes on fast, especially when shifted into Sport mode. And there’s that glorious engine not that warns other drivers to move out of your way.

In today’s SUV-centric market, sports coupes are becoming an endangered species. Indeed, Lexus has been slow to make any major updated to the RC line beyond the mid-cycle refresh of 2018. For 2021, the coupe does get more standard features, especially on the tech side. Android Auto is added to a list that already included Apple CarPlay. And blind spot detection is integrated into the Lexus suite of advanced driver assistance systems.

The bigger news this year is the addition of the RC F Fuji Speedway Edition. Only 60 copies of this special model have been earmarked for the U.S. and they stand out in their distinctive Arctic Black Satin and Cloudburst Gray paint finishes. It’s an upgrade of the previous Track Edition that blended a mix of sporty exterior and interior trim and improved handling. Among the notable features are a carbon-fiber roof, carbon-ceramic Brembo brake rotors and a red leather interior. The Fuji package also adds a limited-production MSTR watch.

Like all versions of the RC F, the sport coupe boasts a classic 2+2 layout, with a big seat that is more likely to serve as an additional storage compartment. The good news is that after you pull the handle on the back of the front seats they tilt and slide forward for anyone who does need to ride in the penalty box.

The design of the Lexus RC borrowed heavily from the luxury brand’s well-received LF-LC concept vehicle. With the exception of the top-line LC grant tourer, it’s the sportiest looking model in the Lexus line-up.

The hood is long and gracefully arcs into the coupe’s nose, twin creases helping frame the familiar Lexus spindle grille. On the RC, the grille is relatively modest in size, a welcome respite from the almost cartoonish excesses to which it’s been taken on more recent Lexus models.

Likewise, the sports coupe feature fewer of the creases Lexus designers have grown enamored of. And most of the exterior details serve a functional purpose, from the air intakes at the nose that feed the air front wheel curtains to the large rear wing. The carbon fiber roof adds a nice touch on the Fuji model, one of the many details introduced on the Track Edition to help lower both the RC’s overall mass and its center of gravity.

The RC F’s cabin immediately emphasizes the fact that this is a driver’s car, with the gauge cluster and infotainment screen well positioned for easy reading and operation. The overall design is reasonably plush though a bit dated. There is plenty of leather — dark red with the Fuji Edition — but some unexpected plastic details on the center console can be a jarring contrast.

Like the higher-end Lexus LC, the RC is more GT than sports car, and that’s underscored by the well-bolstered seating. The front buckets are attractive and, more importantly, extremely comfortable, even after spending a couple hours behind the wheel. But they also kept me firmly in place as I took the RC out to exercise it through the twisty roads of Hell, Michigan.

You won’t want to put close friends in the back seat if you don’t have to. This is a true 2+2. But the back can help out if you’re stopping off at a Costco, as the trunk can manage a mere 10.1 cubic feet of space, making it among the smallest in this segment.

The Fuji Speedway Edition shares the same, naturally aspirated powertrain as the other 2021 Lexus RC F variants — and that’s nothing to complain about. The 5.0-liter package produces 472 horsepower and 395 pound-feet of torque. Power is channeled through and 8-speed automatic and delivered to the rear wheels.

The lighter weight of the Track Edition — and the Fuji — translates into a slight improvement in 0-60 times. But at around 4 seconds, the RC F is still a little bit slower than some of its competitors.

Throttle response and transmission shifts are among the various vehicle settings that can be adjusted by the driver mode control. That also includes the Lexus Dynamic Handling system, with its variable dampers, as well as nanny systems such as electronic stability control.

Lexus has been more cautious than some rivals when it comes to loading up on digital technology. And, considering the hassles that some competitors, like Audi, have had with balky voice control and infotainment systems, that’s probably not a bad decision.

Still, the RC F has added more high-tech features over the years. The Fuji I drove had a 10.3-inch infotainment display. It came with integrated navigation, SiriusXM satellite radio, Bluetooth and wired versions of both Apple CarPlay and newly added Android Auto. It also had a built-in WiFi hotspot and Amazon’s Alexa voice assistant. If I could ask for anything else, I’d likely start with a head-up display, a useful feature for aggressive driving.

The addition of the Track Edition delivered a much-needed boost to the Lexus RC F. It translates into lighter weight, improved performance and tighter handling, whether on track or public roads.

The 2021 RC F is not the fastest model in its segment, nor does it deliver the tightest handling. But it is quick enough for all but the most hardcore performance fans and that delicious exhaust note just enhanced the overall experience.

The sports coupe handled sharp corners with aplomb, especially on the rough pavement Michigan is known for, thanks to its dynamic damping system which gives you both variable shock valving as well as dynamic rear steering. And the reality is that the Lexus coupe did a particularly fine job during every day driving, unlike so many other sports couples that transfer every bump and pothole up to your spine.

While I’d love to see a more complete update of the RC line, the sports coupe remains surprisingly fresh and, more importantly, still a lot of fun to drive. It helps to have the features integrated into the 2021 Lexus RC F Fuji Speedway Edition.

Because the luxury brand only plans to import 60 of the $98,225 Fujis into the U.S., getting your hands on one could prove difficult. But you’ll get everything but the special paint choices — and that MSTR watch — with the $97,700 RC F Track Edition coupes. 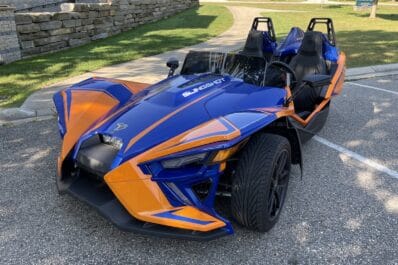