A Week With: 2021 Chevrolet Tahoe RST

New version is more of everything from the last iteration.

Overview: A perennial best seller, the big, rugged Tahoe is put to a variety of uses by outdoor recreational enthusiasts looking for a dependable vehicle that can tow a horse trailer, a boat or a trailer loaded with motorcycles or all-terrain vehicles.

It also works out well for suburbanites who like for extra room to carry their children, their teammates and even campers and fisherman. For those living further out in the country, who need a vehicle with both the space and utility to carry passengers and cargo over all kinds of roads in all kinds of weather, it’s a top choice. Throughout the years, the Tahoe’s size and versatility also have made it a workhorse for fire and police departments.

Exterior: The exterior shape of the 2021 Chevrolet Tahoe is dictated by its function. The front end of the Tahoe is dominated by the big engine compartment. The 2021 version of the Tahoe is longer than its predecessor and designers have taken care with the proportions, sheet metal and the vehicle’s all-around look so it conveys a sense of not only power, but also rugged self-sufficiency.

It looked good even when caked in mud after a long drive on back roads and the 22-inch wheels, which are painted black add to the appearance, stand out. The front fascia, while carrying on the appearance Chevrolet has favored on its trucks and big SUVs, has been remade so it looks more contemporary even as it retains some of the lighting features from the earlier models.

Interior: The cabin of the 2021 Chevrolet Tahoe is designed to be big and spacious. Even the second-row seats are large and comfortable, so passengers never feel cramped and the two captain’s chair seats in the second row of the family-friendly Tahoe that I drove for a week also were equipped with entertainment screens.

“… Throughout the years, the Tahoe’s size and versatility also have made it a workhorse for fire and police departments …”

In addition, while lots of manufacturers have vehicles with third-row seating, those seats in the Tahoe are accessible to the average-sized adult, increasing its ability to carry passengers. One of the most impressive features of the Tahoe

is the layout of the space around the driver’s seat is deftly utilized.

The heated steering wheel has controls for radio and sound, vehicle information and cruise control but the controls for the heated seats, heating and cooling system and adjusting the navigation system also are within easy reach of the driver’s seat. The Tahoe has plenty of storage space around the cabin and one of the added benefits is that when you pull over to enjoy your morning coffee, you will not feel cramped or confined. The cabin also is relatively quiet.

Powertrain: The 2021 Chevrolet Tahoe is equipped with a 5.3-liter Ecotec V-8 engine, 4-wheel drive, and a 10-speed automatic transmission, which produces 355 horsepower and ample torque. That engine also is equipped with what GM describes as Dynamic Fuel Management technology with more than 12 modes of cylinder deactivation that are purposely designed to increase engine efficiency under a variety of driving conditions.

The overall fuel economy from the Environmental Protection Agency is 18 miles per gallon in combined driving and 16 mpg in the city and 20 mpg on the highway. The Tahoe also is equipped with an automatic stop-start function that is practically invisible to the driver to help save fuel.

Technology and Safety: Chevrolet has equipped the 2021 Chevrolet Tahoe with a long list of safety and connectivity features, including a complete package of driver assistance features, including automatic high-beam lighting for dark roads, blind-spot detection, lane-change alerts, rear-cross traffic alerts, as well as rear-pedestrian alert and forward collision-warning system and frontal-pedestrian braking.

The Tahoe also is equipped with Bluetooth, voice recognition, Chevrolet’s infotainment system as well as Apple CarPlay and Android Auto and a 10.2-inch color touch screen in the center stack and seat-mounted 12.8-inch screen in the second row.

There also is a surround-view system to go with the back-up camera as well front- and rear-parking guidance and LED headlights and daytime running lights as well as multiple frontal- and side-collision airbags. There is also a Bose sound system with nine speakers, wireless charging and two 120-volt power outlets and satellite radio. 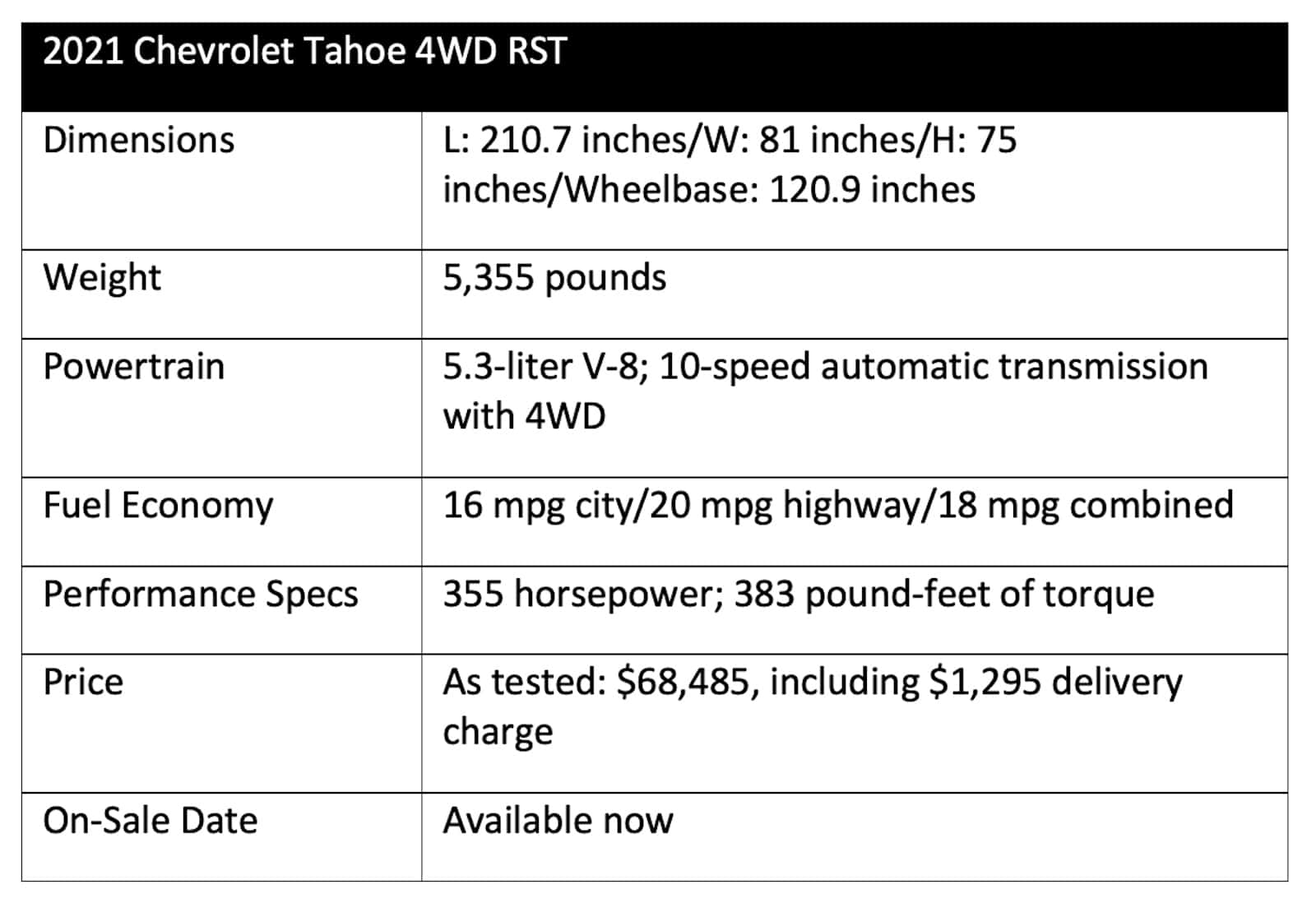 Driving Impressions: The body-on-frame chassis under the 2021 Chevrolet Tahoe has been completely redesigned, giving the vehicle a surprisingly smooth ride on all types of road surfaces. It does well on dirt roads of varying quality. The overall ride quality is given a boost by the vehicle’s well-tuned suspension.

Besides in the impressive ride quality, the braking and handling on the 2021 also are particularly good. The handling is such that you start to think you’re driving a smaller vehicle since you do not have to wrestle with the steering wheel even when you are parking. The engine delivers ample power, and the shifts are relatively smooth even over rough ground or climbing a hill. I thought the Tahoe was relatively nimble for its full-size frame.

Wrap Up: The 2021 Chevrolet Tahoe is built for wide-open spaces and big chores such as hauling boats or maybe a camper and since the version I drove had a manufacturer’s suggested retail price of $68,485, including $1,295 destination charge, a buyer should think long and hard about asking for one.

But I thought the vehicle was well made. Throughout the years, Chevrolet has disappointed customers but the workmanship and the materials throughout Tahoe cabin was most impressive. Everything fit and everything matched, and you had the distinct impression you were riding a vehicle built to last even in changing times. 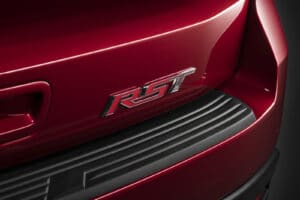 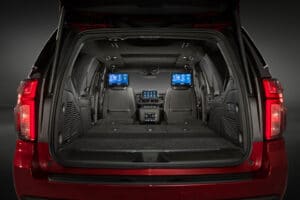 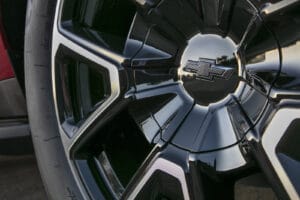