For its second year, Cadillac’s smallest sedan receives a number of small but significant updates, including the addition of wireless Apple CarPlay and Android Auto, and a new 12-inch HD reconfigurable instrument cluster.

Additionally, Super Cruise — Cadillac’s impressive semi-autonomous self-driving system — is optional for the first time. A new Diamond Sky Special Edition is offered with unique trim, 18-inch alloy wheels, Brembo V-Performance front brakes, blue brake calipers and special paint. And, in an unwelcome throwback to 1973, a new “Buckle to Drive” feature keeps the car in park until seatbelts are buckled. Who asked for this?

Cadillac’s replacement for the ATS sedan rides on the Alpha II rear-wheel-drive platform, and it is powered by a choice of turbocharged 4-cylinder engines and either rear-wheel or all-wheel drive. At 187.2 inches long, the CT4 is longer than a BMW 3 Series, but its starting price of $34,390 pits the base model against the smaller 2 Series.

Cadillac offers the CT4 in ascending Luxury, Premium Luxury, Sport and high-performance V-Series trim. Keep in mind, however, that some of the CT4’s option packages aren’t offered on the ironically named Luxury trim level. Inexplicably, the test vehicle — in Sport trim — wore the badge 500T on the back.

Given that most consumers don’t even know what a Cadillac CT4 is thanks to Cadillac’s ever-changing naming conventions, the 500T nomenclature won’t mean anything to anyone.

Cadillac wears the latest iteration of the brand’s long-running art and science styling. Softer, yet still boasting variations of the straight beltline and slab sides that define the look, its appearance is handsome and distinctive, but lacks the flash of Cadillacs of yore, or the audacity of the new Escalade.

There’s no hiding the CT4’s diminutive size, one that seems smaller than its overall measurements suggest. This is not a bad thing being that the car is a sports sedan.

Initially, the CT4’s cabin makes a good first impression. The horizontally oriented instrument panel is anchored by an 8-inch screen that’s controlled by touch or a knob on the center console. Below the screen are a row of buttons to control climate and other functions. It’s all very easy to use.

But interior quality isn’t commensurate with the Cadillac nameplate. It just doesn’t feel indulgent or posh. Penny-pinching accounting can be felt in the cheap feel radio knobs and can clearly be seen in the dreadfully cut-rate lower door panel map pockets.

The center console lacks padding on the sides, so that your legs rest against hard plastic — inexcusable in a Cadillac. But the slot for holding a smartphone and its proximity to the USB ports is welcome, and a thoughtful design.

The front seats firmly hold you in place during abrupt maneuvers, and the legroom is generous. The test car’s ventilated seats were especially appreciated given an unusually warm April. The same can’t be said of the rear seat where leg room is only adequate if the front seat passengers surrender some space.

Given the CT4’s length, you’d expect more room. The trunk is adequately sized, and features boxed-in hinges, so they won’t mar cargo. There are two hooks at the rear of the trunk for anchoring a cargo net. There’s also access to the rear-mounted battery.

Most CT4s are powered by a 2.0-liter turbocharged 4-cylinder engine rated at 237 horsepower and matched to an 8-speed automatic transmission.

Our test car was fitted with a larger 2.7-liter turbocharged engine that generates 310 horsepower and 350 pound-feet of torque through a 10-speed automatic transmission. The same engine is used in the CT4-V, but rated at 325 horsepower and 380 pound-feet of torque. Rear-wheel drive is standard on all models; all-wheel drive is available on all but the CT4-V.

alert and automatic headlamps are available as part of the optional Driver Awareness Plus Package.

Adaptive cruise control, enhanced automatic emergency braking and reverse automatic braking are offeredin the optional Driver Assist Package. However, if you want the option packages, be advised that they’re not offered on the base Luxury trim level, which seems to be deficient when it comes to luxury.

The CT4’s infotainment system is housed in an 8-inch-diagonal HD color touchscreen that can also be controlled through a rotary knob on the center console. Wireless Apple CarPlay and Android Auto, and a 4G LTE Wi-Fi hotspot are standard.

Despite the downscale cabin, the Cadillac CT4 provides impressive handling that makes it fun to drive. There’s a progressive feel to the controls, with a quick, nicely weighted steering that delivers a surprising amount of road feel.

The ride is firm, but the suspension soaks up the worst pavement without feeling punishing. The CT4’s athleticism brings with it well controlled body motions and little body lean in corners. Road and tire noise are minimal; wind noise is absent.

This is the perfect transportation tool for comfortably and confidently tackling daily commutes or schlepping around suburbia.

The powerful, responsive engine and alert transmission prove well behaved, although some brief turbo lag is evident when requesting a brief shot of power. Once your request is answered, however, the CT4 comes alive as you extract every drop of power. It’s truly world-class fun.

A one-day trip across Florida revealed the Cadillac to be an excellent choice for long-distance cruising, returning 29 mpg ­— although the larger engine requires premium fuel. 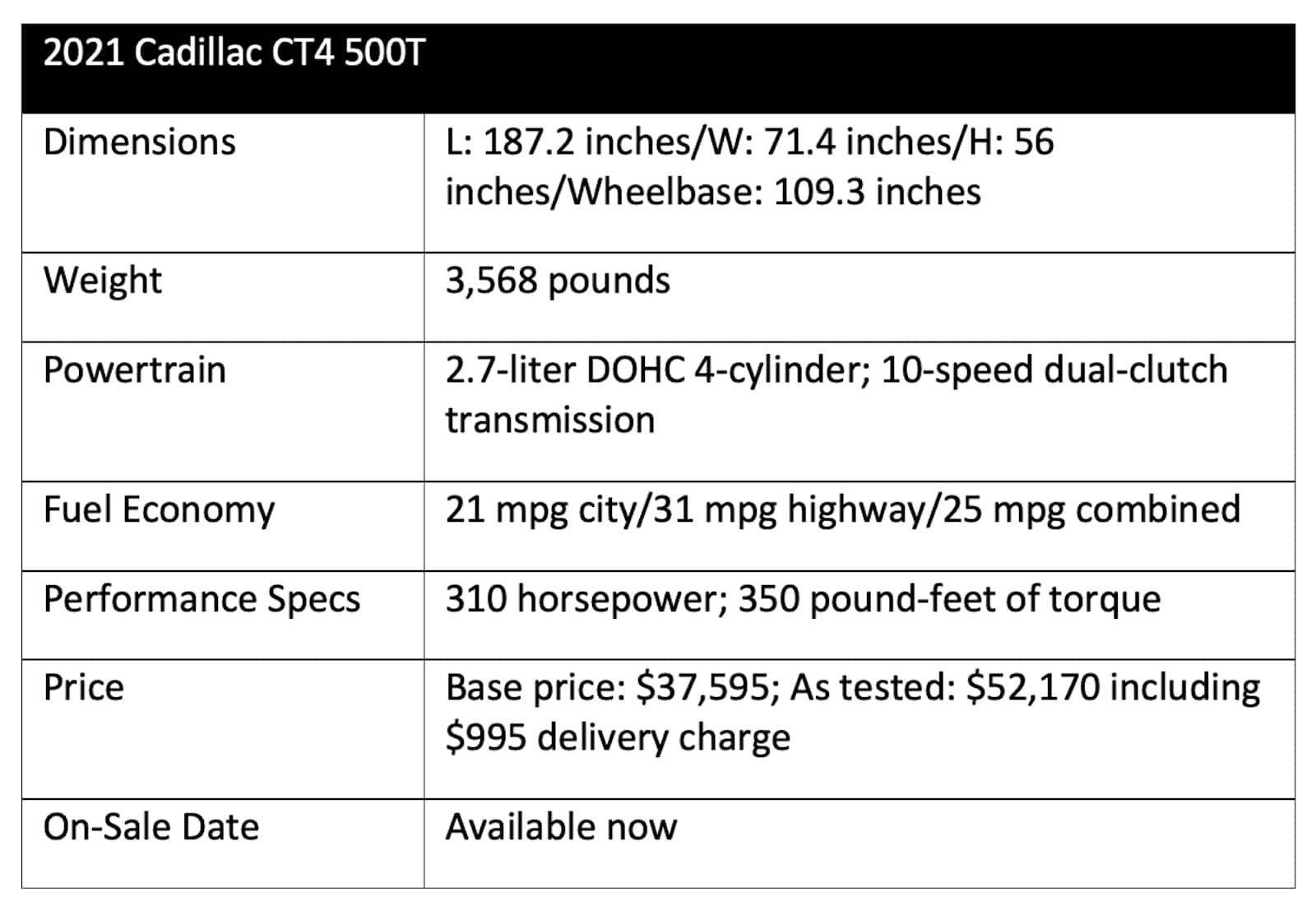 On the minus side of the ledger, the engine note sounds like a cheap economy car rather than the entry-level car in General Motors’ premiere brand.

The Cadillac CT4’s handling is world class and its tech package impeccable. But its lack of styling audacity, the crass brassiness that defines Cadillac as a brand, is M.I.A. That this is a good car is without question. But whether it’s a good Cadillac is open to question.

While it’s better than the ATS it replaces, and its impressive engineering delivers amusingly fun performance, it doesn’t feel luxurious enough to warrant the Cadillac crest, or special enough to entice buyers to not look elsewhere.

And can anyone at Cadillac explain what 500T is supposed to mean? 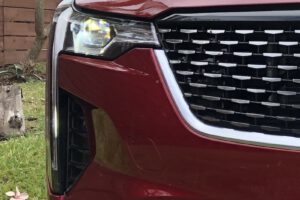 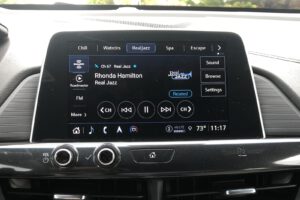 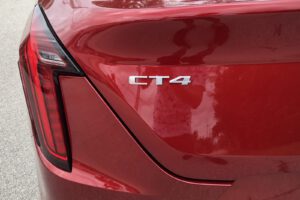