Style, power and performance — it's sublime.

Like BMW’s M models and Mercedes-Benz’s AMG vehicles, Audi’s RS line is the brand’s highest performance trim, a tradition since 1994, when the RS 2 Avant debuted.

Sitting above Audi’s S (or Sport) trim level, the top-of-the-line RS, an abbreviation of the German term RennSport, or Racing Sport. The first RS 7 Sportback (Audi’s term for fastbacks) appeared for 2013, powered by a twin-turbocharged 4.0-liter V-8 engine generating 553 horsepower. Eight years and a new generation later, the formula is very much the same, but even more potent.

It graduates to a 362-hp gas-electric hybrid (slightly slower though, at 5.7 seconds to 0-60 mph). Both come with a 7-speed dual-clutch transmission. Next comes the 444-hp S7, powered by a turbocharged 2.9-liter six that reaches 60 mph in 4.5 seconds. Then comes today’s subject, the top-of-the-line model, and it’s quite a thrill.

From its inception, the RS 7’s donor car, the A7, proved that you could make a hatchback sexy and luxurious by channeling the design élan of the sedanettes and streamliners of 80 years ago. Audi wisely left its striking shape relatively unchanged since its inception — and that’s good.

The simplicity of its wardrobe is beguiling. Long, low and lean, its simply supple shape flows unimpeded by body seams. Its length is what allows designers avoid the hunchback stance of too many fastbacks. While the RS 7 shares its hood, roof, front doors and tailgate with its lesser sibling, the rest of the car’s exterior is unique.

Its overall attitude is enhanced by its flared wheel arches and lower stance. An integrated lip spoiler extends at speeds above 60 mph, accentuating Audi’s distinctive “overbite” taillamps that give the car a clear identity, one being voraciously copied by Korean automakers.

Sleek and modern, the overall design is glossy, rendered in black and aluminum, and subtly accented with carbon fiber trim. Its opulence augmented by the $2,500 Executive Package, which adds leather to the dashboard, armrests sills and console, and also adds heated rear seats, head-up display, and power soft-closing doors. It’s sublime. Enhancing the cabin’s high-tech aura is its 12.3-inch virtual digital instrument cluster, which offers an impressive amount of customization.

Seats are comfortably firm, with good side support. Head and leg room are generous up front, notably less so in the rear, but more so than previous models. Still, accessing the rear seat can be challenging for larger individuals, so try before you buy. Trunk space was substantial.

The lovely noise this car generates comes from a 32-valve, double-overhead-cam twin-turbocharged V-8. It’s mated to an 8-speed Tiptronic automatic and quattro all-wheel drive. It reaches 60 mph from a stop in 3.5 seconds, a noticeable improvement from the base A7’s 5.2 second time. And given the test vehicle’s nearly two-and-a-half-ton weight, that’s quick. We easily matched the EPA’s 17 mpg in mixed driving. But keep in mind that Audi recommends premium fuel.

The screens make the business of driving easy. There are few buttons or knobs, but the sizable on-screen buttons are easy to activate, although you must physically push the screen firmly to get any response of haptic feedback. Also, the steering wheel toggle for the radio didn’t like to be rushed, as changing stations too quickly easily overwhelmed the MMI’s circuitry. Better to swipe up on the screen and use the station list.

When you’re ready to roll, you’ll find the RS 7 to be sublime. That there’s enough power is without question; it’s the rest of this car’s performance that truly impresses. The RS 7’s all-wheel steering provides notable feedback and exquisite precision, while the RS adaptive air suspension expertly deals with the worst of America’s crumbling infrastructure. 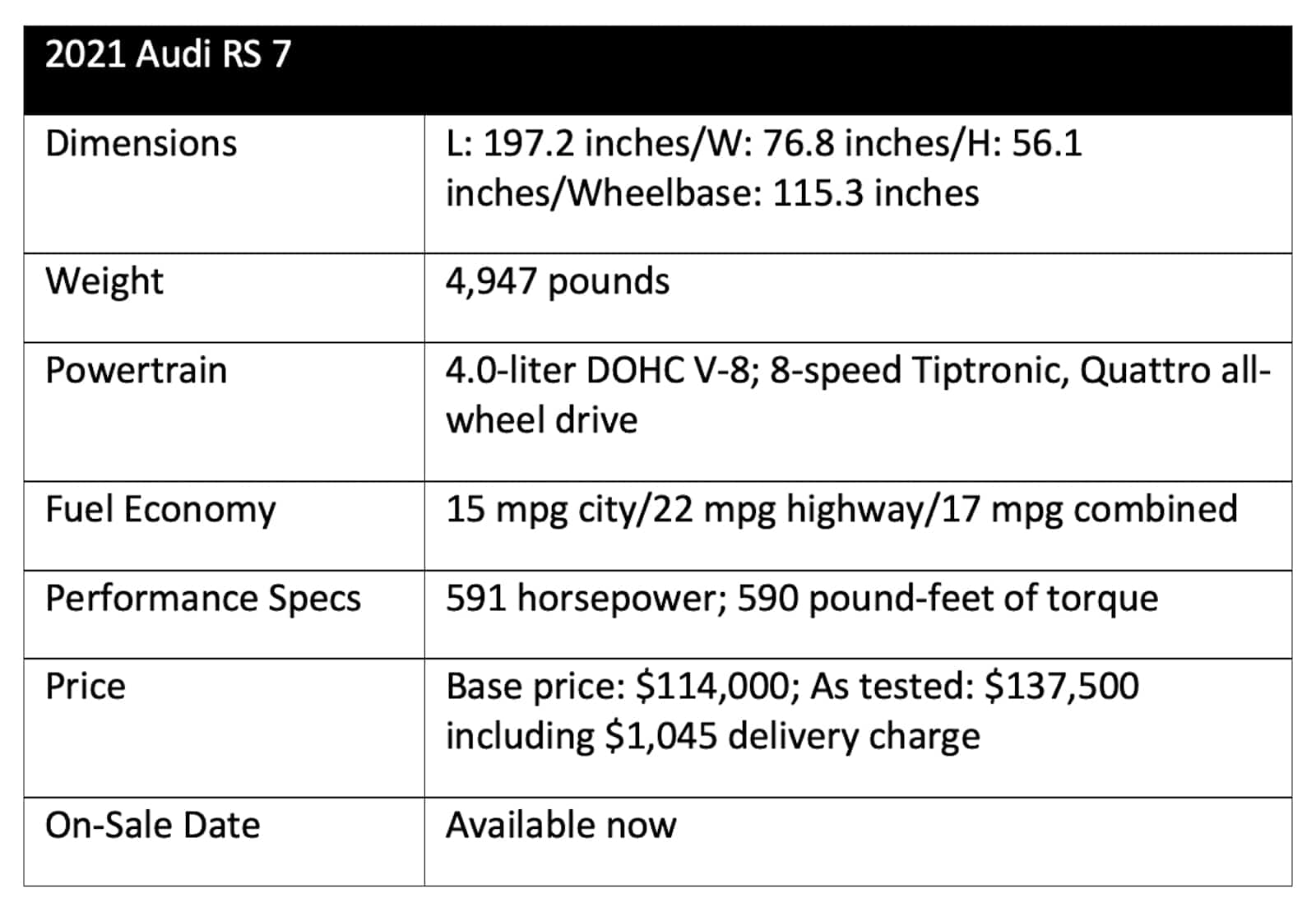 There are four driving modes: Comfort, Dynamic, Auto and RS. Each has its place, and I found myself in comfort as much as I was in RS or Dynamic, because it delivers it without the soggy handling so typical of comfort modes in other German cars. Each mode has its own nuance and character, suitable for any number of circumstances.

But even at its extremes, Comfort at one, RS on the other, there’s an impressive dose of calm capability that smoothly executes the task at hand without being excessive. Comfort is just that, with throttle response that’s more measured than in other modes, allowing for uniform power delivery. At the other extreme, the RS mode endows this go-cart with a domineering persona that’s intoxicatingly fun, but still amazingly civil. As proficient as it is, its ride is not of the vertebrae shattering variety. It’s ­— um, well — it’s sublime.

The RS 7 is impressive performance fastback, with an exceptionally comfortable, quiet, capable athleticism and speed that redefines what a GT is, with a transcendent modernist twist. It’s another intoxicatingly talented automobile from the company whose cars wear four rings. 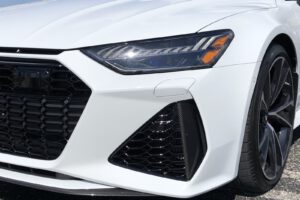 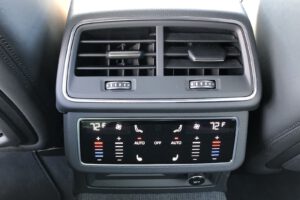 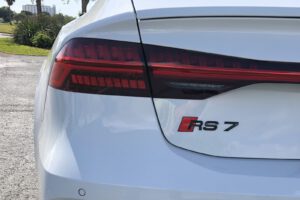