The leader of the hot hatch pack remains at the front.

On most days the 2020 Volkswagen Golf GTI Autobahn is a lot of fun to drive, reminding folks that the GTI is basically a founding member of the “hot hatch” club. Now in its eighth generation, VW’s done an excellent job of keeping the design and technology current yet keeping the boy-racer performance intact.

Overview: The manual transmission that defines this car only becomes a drag in heavy traffic where an automatic transmission would make the shifts without much of a fuss. But out on the open road the car’s impressive performance defines the car’s true character as a vehicle for anyone who loves to drive on an open road where the impediments are few and the speed limit is more of a reminder or a suggestion.

It is small by current standards where traffic is dominated by truck and sport-utility vehicles. But it is also one of the quickest cars available on any dealer’s lot today, plus has a practical side with room for passenger or two as well as gear.

Exterior: Volkswagen has been building a hatchback version of Golf for a long time – 45 years, according to VW’s press materials. But the Golf GTI still has presence, even when it is dwarfed by larger SUVs and trucks.

It looks as if its poised for a quick getaway and Volkswagen has dressed up the Golf’s curb appeal by adding 18-inch wheels, LED headlights and fog lamps out front and sleek fifth door or rear hatch where the handle is artfully tucked away under a nice bright VW badge.

Some hatchbacks look a little bulbous or outdated, but this one still looks handsome and surprisingly contemporary.

Interior: The Golf is, at heart, a small car. Volkswagen designers have made good use of the space with a design that emphasizes putting everything within easy reach of the driver. The visibility is good, and the analog gauges fit nicely within the design scheme, enhancing the connection to the engine’s performance, which is always front and center with the manual transmission.

The versatility of the interior is enhanced by a trunk floor that can be moved up or down by 3.9 inches and a 60:40 split backrest that can be folded down for more cargo space.

The materials used in this version of the Golf include a steel pedal and a leatherette-wrapped multi-function steering while the ambient lighting built into the cabin and the leather-wrapped shifter enhance the premium feel. The interiorlighting scheme also works well during night driving.

Powertrain: The Volkswagen GTI Autobahn is powered by a 2.0-liter, 4-cylinder, 16-valve engine with turbo charging and fuel-injection that delivers 228 horsepower and 258 pound-feet of torque, making this into a genuine “hot hatch” with a terrific power-to-weight ratio, which, with the 6-speed manual transmission, can easily zoom past much more expensive sports cars with more engine.

The power is applied quicky and efficiently, moving through the gears manually. The engine also reacts smoothly when a downshift is required.  The powertrain also delivers a nice throaty exhaust note when it’s put through its paces on an open road. The fuel economy also very adequate with 27 mpg on the combined rating, including 24 mpg in the city and 32 mpg on the highway.

Safety and Technology: The Golf GTI Autobahn isn’t pricey by today’s standards – our tester was $37,415, including the $920 destination charge – but it is well equipped with safety equipment, such multiple airbags, seat belts, anti-lock brakes as well as advanced driver assistance technology.

The model I drove was equipped with driver assistance feature such as blind-spot detection, adaptive cruise control and lane keeping assistance as well as rain-sensing windshield wipers.

Smartphone for Apple CarPlay, Android Auto and MirrorLink as well as Volkswagen Car-Net, which offers owners the ability to interact with their vehicle from miles away via the mobile app.

Driving Impressions: The Golf GTI Autobahn is great fun to drive. It has more than enough zip in its 2.0-liter engine to outperform a more powerful and far more expensive vehicle. If the car’s speedometer that runs up to 180 mph was accurate, it would even push up into super car territory — it doesn’t but it’s a nice thought.

But for a lightweight, front-wheel-drive car, I also found it to be very stable going through curves and when pushed to pass. Volkswagen also has equipped the car with three different suspension modes that control the damper valves electronically to give the car the best balance and grip. The variable-ratio steering system provides more response at higher speeds. All in all, a great vehicle to drive. 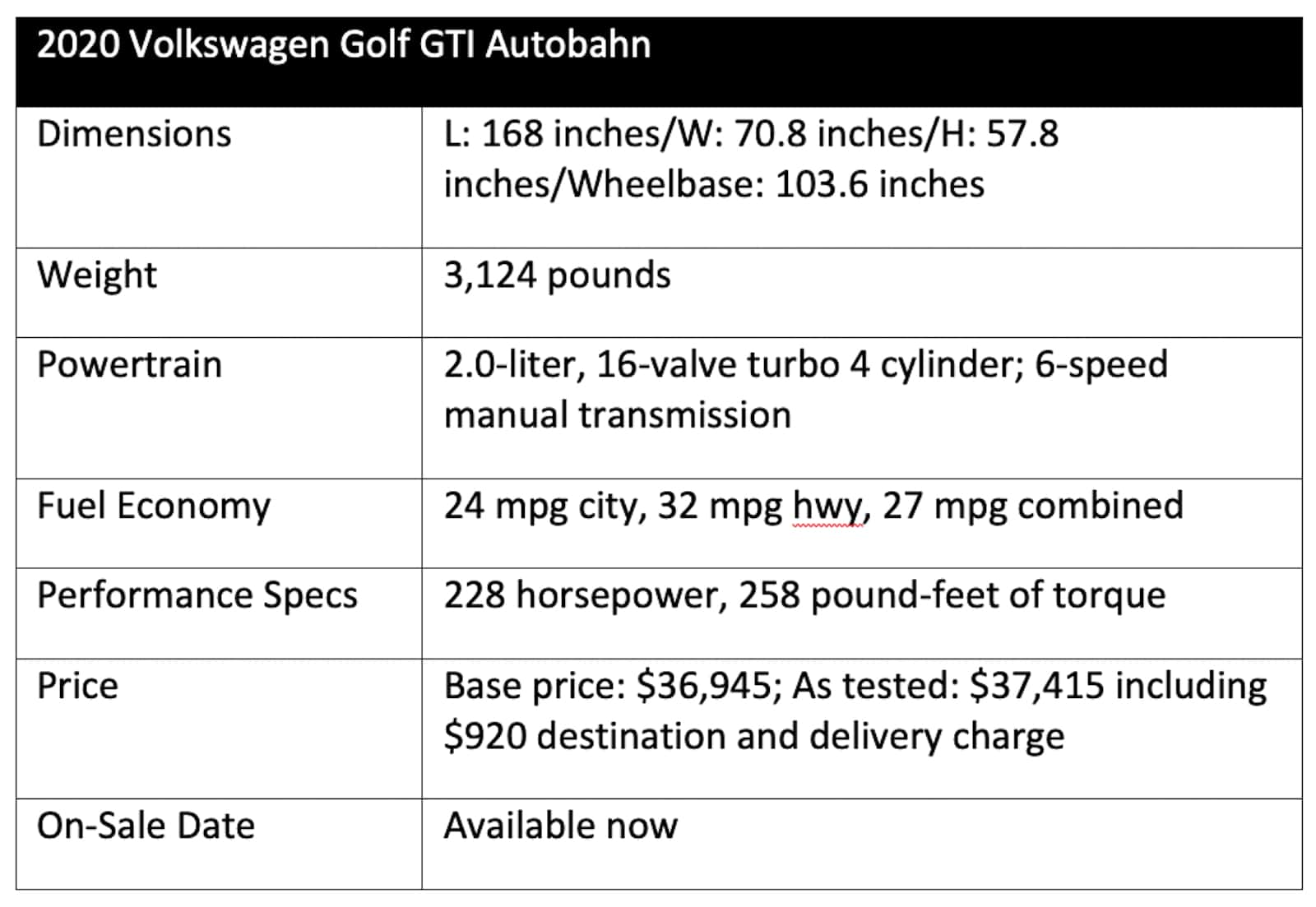 Wrap Up: For what is – based on the preferences of today’s motorists – is a distinctly unfashionable car, the Volkswagen Golf GTI has lot of panache. But it’s also a piece of automotive lore that’s quickly going extinct just like all those species scientists say are dying under the weight of climate change.

I am almost certain Volkswagen, which is busy building electric vehicles, won’t be investing in a new generation of manual transmissions or even use one offered by a company from out in East Asia. For the diminishing number of fans of the manual transmission, this is about as good as it gets.