The expected off-road chops are paired with everyday utility.

The Toyota 4Runner has been a mainstay of the company’s line-up for more than 30 years and is now on its fifth generation that carries on the body-on-frame character with the capacity to handle a variety of challenges from hauling cargo to towing to traveling cross country.

The 4Runner TRD Pro is specifically designed to serve as a platform to handle off-road outings while not falling short on the day-to-day activities that send the odometer clicking.

Overview: The current version of the 4Runner is spacious, comes with smart technology and has the power necessary to carry out a broad range of tasks. It still fits comfortably into Toyota’s family of utility vehicles between the smaller RAV4 and the larger Sequoia and also complements the Toyota Highlander, which is built on a unibody.

It also represents some formidable competition for vehicles such as Ford Explorer, Chevrolet Traverse and the Jeep Grand Cherokee at a price point that starts just under $37,000 but climbs up $46,000 when it fully loaded…

Exterior: A utility vehicle’s shape is dictated by tradition with a couple of variations and the 4Runner is a flat-roof variant. But it also comes with a long list of exterior accessories, including projector-beam headlights and LED taillights with smoked sport trim, and integrated front fog lights and ample wheel openings.

… The TRD Pro version that I drove also came with a color-keyed front and rear bumpers, door handles, heated and power outside mirrors, over fenders, side rocker panels; and silver-painted roof rails with black end caps …

Interior: On the inside, the 2020 Toyota 4Runner TRD Pro is quite comfortable and nicely furnished for a long trip or for anyone whose job requires they work out of their vehicle. There is plenty of storage in the SUV. The center console storage compartment comes with coin, tissue and pen holders. It’s also ample enough and flat enough to serve as desk if you are using a laptop or clipboard.

Toyota also has used the TRD badge as a design element throughout the cabin, including the floor mats and the shift lever. The TRD version of the 4Runner also enjoys a heated, eight-way power-adjustable driver’s seat with power lumbar support; four-way power adjustable front passenger seat, Auto-dimming rearview mirror and a tilt-slide moon roof with sunshade. The overall visibility from the driver’s seat is excellent and the TRD version’s is a bit taller than the other iterations of 4Runner.

Powertrain: The 2020 4Runner TRD Pro is powered by a 270 horsepower, 24-valve DOHC V6 with new TRD-branded cat-back exhaust, which gives engine a powerful-sounding growl. The power is delivered to the wheels through a five-speed transmission.

The 4×4 system in the TRD Pro is controlled by selector knobs and the powertrain also produces 278 foot-pounds of torque, which was more than enough for every-day driving. On the TRD skid plates also protect the engine/front suspension, fuel tank and transfer case. Overall, the 4Runner gets 17 mpg rating on the Environmental Protection Agency’s combined city and highway driving cycle.

(Toyota betting all-wheel drive can save its passenger car line-up.) 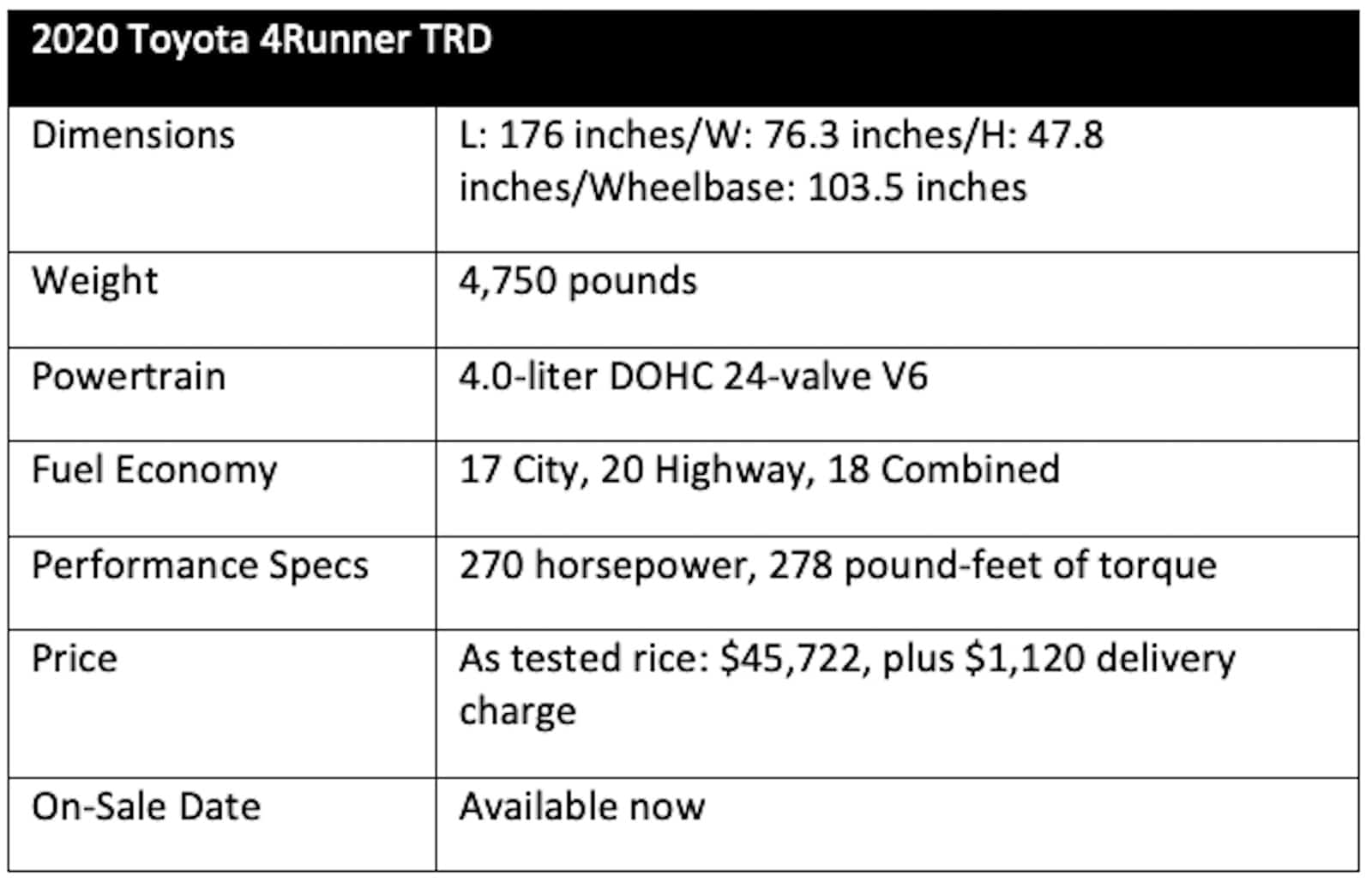 sy to read at night along with a high-resolution 8-inch touchscreen display for the Audio, Audio Plus and Premium Audio systems that sits above the center console. There also are an additional USB ports for the rear seats.

Driving Impressions: The 4Runner has never had much of reputation for finesse. But we found the ride and handling stable and responsive. The 4Runner also managed to handle all kinds of pavement, including long stretches on direct roads, without any difficulty. we also were impressed with the turning radius, which turned out to be surprisingly nimble. The power-assisted and variable gear rack-and-pinion steering system on the Toyota 4Runner.

The brakes were very good, we thought, and the peddle travel, before they came on, provided a sense of confidence while they were applied. The 2020 Toyota 4Runner TRD Pro also comes with special shocks from Fox, a favorite of the Toyota Racing Development unit, and an upgraded suspension that has helped the vehicle deliver a most comfortable ride both on the pavement and on the long stretch of dirt and gravel roads that we used for one part of the test.

Wrap Up: Overall, the 2020 Toyota 4Runner TRD Pro made a favorable impression during the week that we drove it. The 4Runner brings a long history to the table, but Toyota seems to have done a good job of keeping it fresh. The automaker has long followed a manufacturing philosophy that stresses continuous improvement has made it a much better vehicle than back in the 1980s when it was first sold to customers in the U.S.

We found the 4Runner had ample room for people and luggage and a ride that could easily adapt to the terrain and that also seemed well adapted to a cross country trip or a trip almost anywhere. Plus it comes with Toyota’s well-earned reputation for durability and reliability. 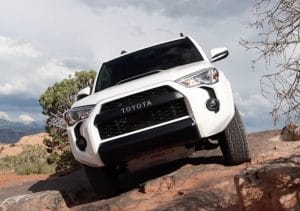