By now most drivers in the United States have heard about electric cars and probably listened to friends and co-workers argue about their merits or potential merits. But the introduction of battery-electric vehicles has been slow.

However, the options have grown significantly in recent years due to introductions from General Motors, Tesla and others with even more coming in the next 18 to 24 months. However, the first mainstream model to make inroads with the public was the Nissan Leaf.

Initially an underpowered BEV with little range and a quirky design, the Leaf has evolved with the growth of the market into a viable option for daily life.

Overview: The 2020 Leaf recently tested was an impressive vehicle and underscored that they are quite capable of taking on the day-to-day demands of city, suburban and freeway driving without much difficulty.

Moreover, the 2020 Nissan Leaf clearly has gained power, utility and overall appeal from the carmaker’s persistent efforts to make the car into a leader in a category that is no longer a novelty. Additionally, it has become steadily more important both to Nissan’s future and the future of the industry.

Exterior: On the outside, Nissan stylists have moved away from the idea of giving the Leaf a unique electric vehicle persona, which so animated the first iteration when it appeared back in 2010.

… Ten years on, Nissan – which has successfully designed stylish small cars for decades – has produced an updated, contemporary version of the Leaf that from front to hatchback looks smart …

The Nissan Leaf SL Plus also comes with 17-inch wheels and LED lights at the corners, which enhances the vehicle’s curb appeal. The one drawback to the Leaf’s design is that it isn’t quite tall enough to make it a utility vehicle, which means it actually looks like a hatchback.

Interior: The interior of the Leaf, I found, measures up well with other subcompact vehicles with roughly the same space and amenities in the cabin. Nissan has taken much of what it has learned from building fleets of small cars with well-designed interiors and applied those lessons to the 2020 Leaf, which comes with comfortable seats, easy to reach and use controls, and excellent visibility from the driver’s seat.

Since it is basically a small vehicle, there isn’t a lot of storage space for items for the small items that invariably wind up in a car. On the plus side, there is an 8-inch touch screen for entertainment and navigation and a heated steering wheel. The materials in the cabin, while not exactly plush, are of good quality and help create a pleasant environment. In addition, there also is ample space in the rear of the vehicle for carrying groceries or luggage.

Powertrain: The power in the Nissan Leaf SL Leaf comes from a 160 kilowatt electric motor and 62 kWh Lithium-ion battery with up to 226-mile range and a quick charge port, which translates into the equivalent of 104 miles per gallon.

The less expensive Nissan Leaf S and Leaf SV come complete with a 110 kW electric motor, 40 kWh lithium-ion battery with 149-mile range. The Leaf also comes with. 6.6 kilowatt onboard charger, a regenerative braking system, an e-Pedal with hill-hold assist and portable, 120-volt “trickle charge” cable that can be used to re-charge the Leaf on a standard household or garage outlet. 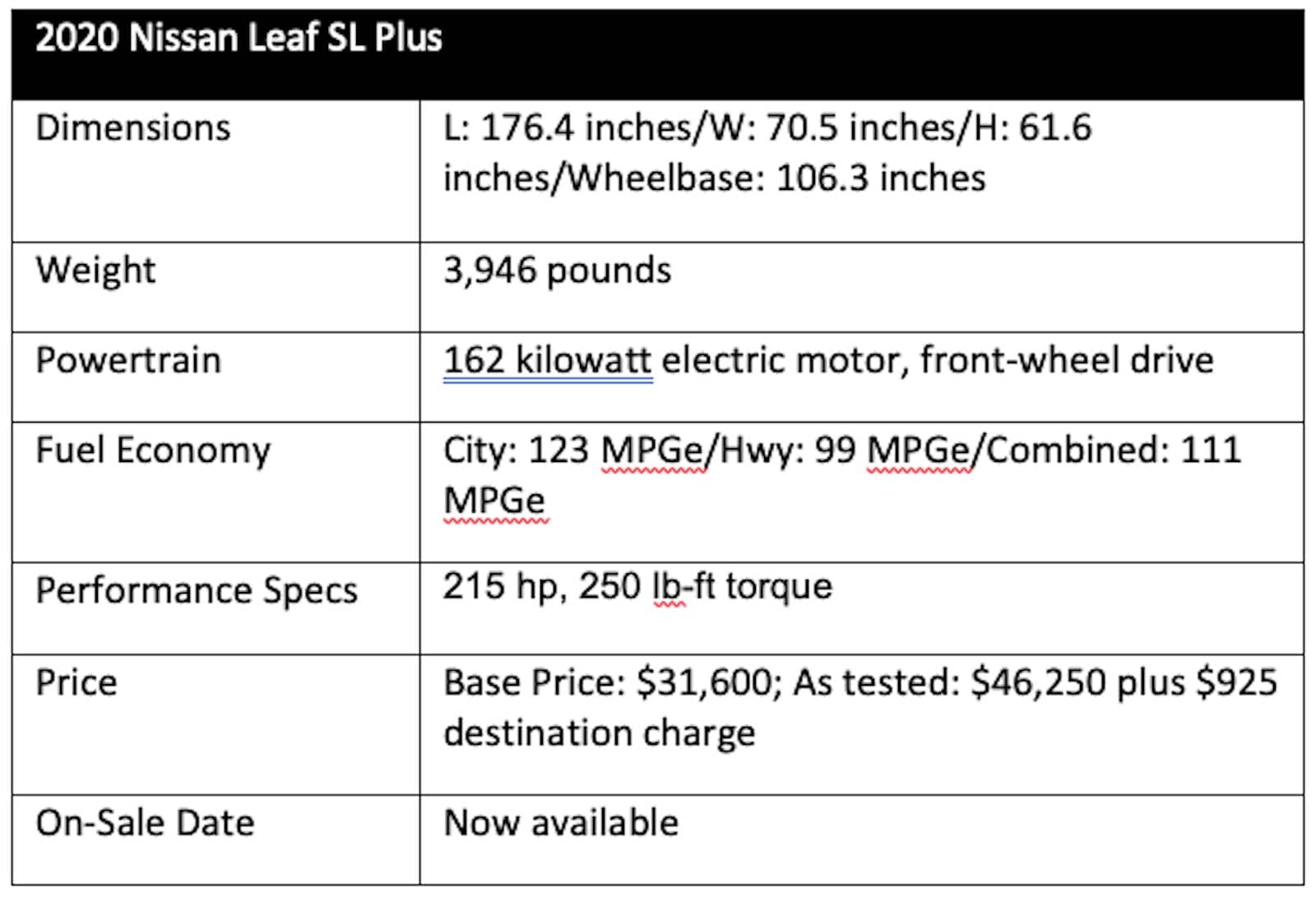 In addition, it is outfitted with automatic driver assistance features such as automatic emergency braking, blind-spot warning, lane departure warning and high-beam assist.  The Leaf also has bluetooth, a Bose energy efficient series entertainment system and four USB and Sirius XM connections as well as Apple CarPlay and Android Auto and remote battery status check. It also comes with Nissan’s “Door-To-Door” navigation system with 3D and satellite imagery. There is also a new pedestrian warning sound on the car.

Drive Impressions: The Leaf has instant pickup right from the start as the electric motor delivers a huge amount of torque right from the moment accelerator drops, raising its fun to drive quotient.

… With its larger electric motor and larger battery, the Leaf enjoys plenty of speed for passing on the freeway …

The Leaf’s battery pack gives the vehicle a relatively low center of gravity, giving it a solid feeling as it takes on hills or curves or while cornering. Nissan also has equipped the Leaf with a refined steering system that melds well with the car’s driving dynamics. The Leaf’s regenerative braking system also gives the vehicle plenty of stopping power.

The 200 miles-plus battery range is genuine and effectively kills off “range anxiety” because, unless you are driving from Detroit to the Mackinac Bridge, you have plenty of range to go about your daily rounds and get back home to re-charge.

Wrap Up: The 2020 Nissan Leaf SL Plus with 226-mile range is an impressive vehicle and one that underscores that the battery-electric vehicle is growing into a maturity that will make it more acceptable to a wider range of customers particularly in big urban areas where mass transit and car sharing seems to have lost some of their appeal due to the pandemic.

The manufacturer’s suggested retail price of the Nissan Leaf SL Plus is $46,045, including the $925 destination charge, so the Nissan Leaf SL is plenty pricey, but the least expensive Leaf model starts at under $32,000. Moreover, since you never have to buy gasoline, drivers save an estimate $4,250 over five years, which helps offset the costs.