The three-row sport-utility vehicle is elegant and powerful.

Carmakers the world over have set their sights on luxury, and skyrocketing sales of luxury utes is drawing them to the segment.

But Mercedes-Benz remains one of a small, elite group of manufacturers that build the vehicles that are considered luxury products long before they leave the factory or appear in a showroom – fact of life in the automotive world that was reinforced recently by spending time behind the wheel of the 2020 GLS 580 4Matic.

Overview: The GLS 580 4Matic, a three-row sport-utility vehicle, is elegant, technologically advanced and powerful. It also carries with it an aura that leaves no doubt about its luxurious antecedents and time, expense and effort that went into its creation and cannot help but create the impression of impeccable taste, matching up well with its closest rivals such as the Cadillac Escalade and Lexus LX 570.

Exterior: Like all sport-utility vehicles, the GLS is limited by the gawky SUV silhouette that’s next to impossible to hide.

But Mercedes designers have gone all out, dressing up the GLS 580 with everything from 23-inch wheels, handsomely packaged LED lights in the front and two-part tail lamps in the rear.

In addition, there is a large roof spoiler, black wheel arch claddings and wide shoulders at the rear and what is described as a power dome on the hood. There also are illuminated running boards with robust stainless-steel inserts and chromed underride guard, which, when combined with the Mercedes-Benz star, one of the automotive world’s most distinctive trademarks, give the GLS an impressive appearance both sitting at a curb or in traffic.

… the largest SUV sold by Mercedes-Benz, the GLS has ample room for the driver as well as three rows of seats that are actually usable by adults and a sweeping, panoramic sunroof to let in sun and light into interior while cruising on a summer day or on a dull winter day …

Interior: Stepping into the GLS you cannot help but be impressed by the tailored leather seats, the leather wrapped steering wheel and the leather on inner door panel and dashboard.

The seats in the third row can be lowered into the floor to increase the trunk space, while the seats in the GLS’ second row fold flat just in case you need to move furniture. Besides offering style, comfort and utility, the driver controls, both on the steering wheel and center console, are within easy reach and the entertainment and navigation systems are controlled by Mercedes-Benz user experience.

Powertrain: The 2020 GLS 580 is the first SUV equipped with Mercedes 4.0-liter V8 biturbo engine with EQ Boost and 48-volt onboard electrical system as well as a 9-speed transmission and 4Matic all-wheel drive.

The 4.0-liter engine produces 483 horsepower and 516 foot-pounds of torque, which is more than enough for everyday driving since in the U.S. the GLS 580 has a governor that holds the top speed to 130 miles per hour.

Safety and Technology: The 2020 GLS 580 4Matic has a full complement of airbags to protect occupants from a front- or side-impact crash. It is also equipped with advanced driver assistance features, including the automaker’s latest active driver assistance system, which allows drivers to let go of the steering wheel in stop-and-go traffic or for brief periods while following behind another vehicle on the highway.

It also is equipped with advance driver assistance features such as active steering assistance, active lane keeping assistance, speed-limit controls and blind-spot assistance. The thin-film piece on the dashboard with the instrument cluster, navigation and entertainment screens is so sensitive, I managed to turn on the radio when a hit with a squirt of cleaning fluid as I was preparing to wipe down the vehicle and turn it after my weeklong test.

Driving Impressions: With all that power, coupled with the luxurious surroundings, the 2020 GLS 580 4Matic was enormous fun to drive. 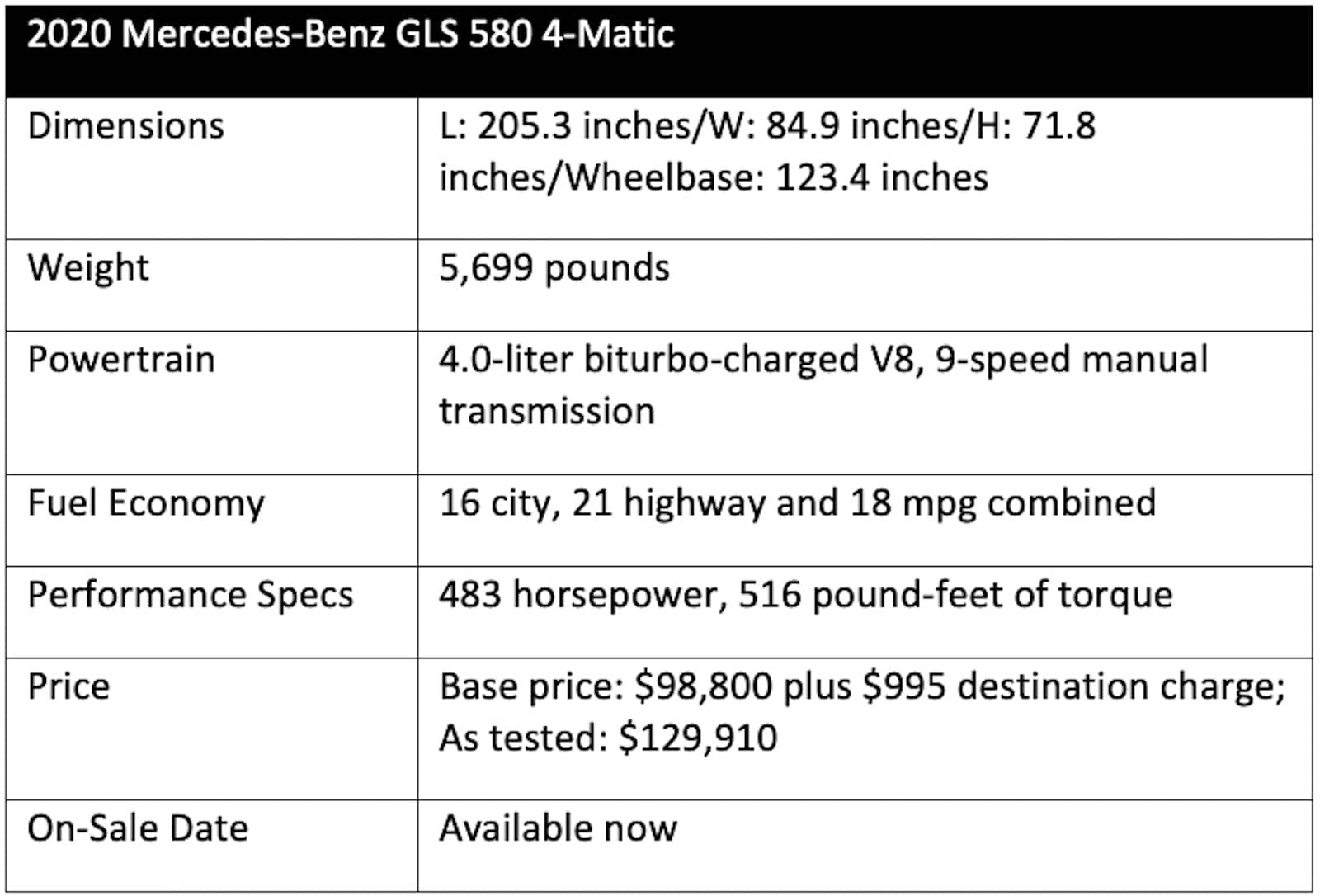 Passing was easy as the power was delivered seemingly instantly through the nine-speed transmission, which never seemed to miss a beat or a shift. The driving dynamics, including steering, handling, braking, were all smooth and efficient.

The GLS 580 also is equipped with what Mercedes describes as E-Active Body Control, which actually manages the suspension. It is powered, in part, by the 48-vot battery. It is described as the only system on the market where the spring and damping forces can be individually controlled at each wheel and it works, making for a comfortable ride over all kinds of road surfaces.

Wrap Up: The Mercedes-Benz GLS 580 4Matic is a terrific vehicle that illustrate how far technology has come in recent years and where motor vehicle technology is headed in the future. But all that luxury and technical sophistication come at a hefty price that requires a hefty income and perhaps a second mortgage.

The base price on the vehicle I drove was $98,800 before the $995 destination charge and price of the fully equipped model I drove was $129,910, according to the window sticker. Genuine luxury isn’t cheap. 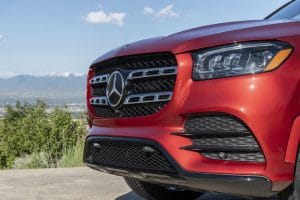 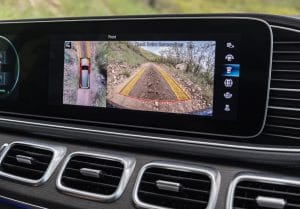 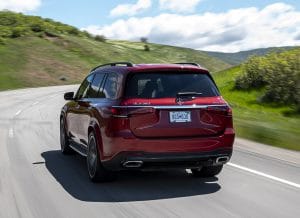