Still crazy (about it) after all these years.

It’s hard for me to imagine that it was nearly half a lifetime ago, 1989 to be exact, that I first took a Mazda Miata for a test drive. Everywhere I went people gathered to check it out. Another driver in an old Spitfire following as I exited I-75, pulled alongside and asking me what it was. Looking at his beat-up Triumph, I suggested, “It’s the best British sports car the Japanese have ever built.”

One of us is showing our age and it’s not the Mazda Miata – or as the automaker insists on calling it, the MX-5. (Sorry, but to me and a legion of fans, it will always be Miata.) After three decades, Mazda has stuck with the tried and true formula. Sure, there have been a handful of changes, the original pop-up headlights long gone, for one thing, and the 2020 Mazda MX-5 Miata more powerful than ever. But it’s not a rocket and never should be. The joy is in an overall driving experience that few cars come close to matching.

Overview: In an era of look-alike sedans and SUVs, there is no mistaking the iconic Mazda MX-5 Miata, whether looking it over or taking it for a drive. It has its drawbacks, notably its cramped cockpit and marginal storage capacity.

It’s quick, if nowhere near the fastest car in its class, but it has a balance that one rarely finds, bringing everything together in a way that can best be described as pure driving pleasure.” And, if you get your hands on one, don’t be surprised if you take the long way to your destination, just to clock a bit more time behind the wheel.

Exterior: Mazda has a justified reputation for design, models like the Mazda6 sedan and CX-9 among the most visually appealing cars in their segments. The brand’s design language has evolved significantly during the past 30 years, and you can see subtle hints of that in the shape of the fourth-generation roadster.

… There’s a reason why so many automotive journalists have had, or still own, a Miata …

It’s less slab-sided, and the pop-up lamps are long gone, the latest headlamps now more slit-like and flowing into the front quarter-panels. Surprisingly, a side-by-side comparison with earlier generations reveals that the current MX-5 is a wee bit shorter than the prior version.

Introduced for the 2015 model-year, one of the biggest updates was the addition of a retractable hardtop version, the Miata RF. For those in snowier climes, it offers some advantages and it is quieter when cruising with the top up. But it’s probably the topic of more debate among MX-5 fans than anything else in 31 years.

Interior: I’d like to think I’m as limber as I was when I drove the original “NA” Miata. The reality is it can take some maneuvering to clamber inside, especially if you’re 6’2”, as I am. There’s not much seat travel and, with the seat all the way back you’ll not be able to lean much. For my “5-13” wife, whose height is all in her legs, she spent her time in the passenger seat with knees pressed against the IP. But the tight package is worth those limitations.

Once inside you feel a certain connectedness to the Miata that’s rare elsewhere. That’s all the more so if you have the stick version, the gearshift lever perfectly placed. The infotainment screen is larger than before, and the control knob is likewise easily reachable. The seats, meanwhile, are supportive but the bolstering is not intrusive. With the manually operated soft top, opening and closing is a quick, one-handed operation.

Cabin amenities are marginal: one cupholder, no door pockets and only a small storage bin centered behind the two seats. Considering the car’s pocket-sized dimensions, however, the trunk is larger than expected, roomy enough for a comfortable weekender or shopping at the local grocery. But switch to your SUV for Costco.

Powertrain: Now in its fourth generation, the “ND” model, as it’s known to Miata aficionados, is the most powerful version of Miata ever, thanks to its peppy, naturally aspirated 2.0-liter four that delivers torque as soon as you step on the throttle, and keeps it coming right up to its 7,500 RPM redline.

The numbers might not tell the true story at 181 horsepower and 151 pound-feet of torque. But that’s plenty for a vehicle that weighs in around 2,400 pounds – just 2,341 if you opt for the Club model that is popular with those who enjoy weekend racing.

In an era when manual transmissions are all but vanished, Mazda has retained a six-speed stick for diehards and few products scream out so loudly as the Miata to have you row your own.

The short-throw shifter is perhaps the best on the market. But, should you disdain working a clutch during weekday commutes – or perhaps you’ve never learned to run manually through the gears – there is a decent six-speed automatic available.

At 5.7 seconds 0-60 – 5.8 seconds with the heavier Miata RF – the roadster isn’t the fastest sports car option but, even when cruising it delivers a sense of speed that has been all but designed out of most modern vehicles.

Technology & Safety: The 2020 Mazda MX-5 isn’t the most high-tech automobile out there, but it does have a reasonable share of features, including Bluetooth, Apple CarPlay and Android Auto.

Perhaps we fall into the Luddite category but, with just a few exceptions, the 7-inch screen, with its Mazda Connect system, seems easier to operate, especially if you’re bouncing around on rough pavement. Surprisingly, a CD player is still available. Navi is optional on some trims and standard with the Grand Touring model we drove this week.

On the safety front, there are the expected airbags and basics like electronic stability control. Advanced Driver Assistance Systems include as standard equipment forward collision warning with auto braking, blind-spot warning, cross-traffic alert and lane departure warning, the last sounding a rumble-like sound from one speaker or another indicating which line you have drifted across.

Drive Impressions: If it hasn’t come through by now, the Miata is one of our favorite cars when it comes time to head out and just cruise – or when we have some time to scoot along the tight-and-twisties in Hell, Michigan, our favorite driving route in Michigan. Steering is quick and precise and the MX-5 has an uncanny, almost intuitive way of reading what you want it to do.

Nanny features like stability control will keep you out of trouble in most situations. Flip it off and you can have some real fun drifting through corners. The good news is that if your overcook a turn the brakes are up to the job and that balanced chassis and suspension package makes it easy to pull things back together.

The MX-5 Club edition is great for those who want maximum handling, and those who might want to do a little autocrossing. But its stiffer suspension might be more than you bargain for if you’re going to spend most of your time commuting. 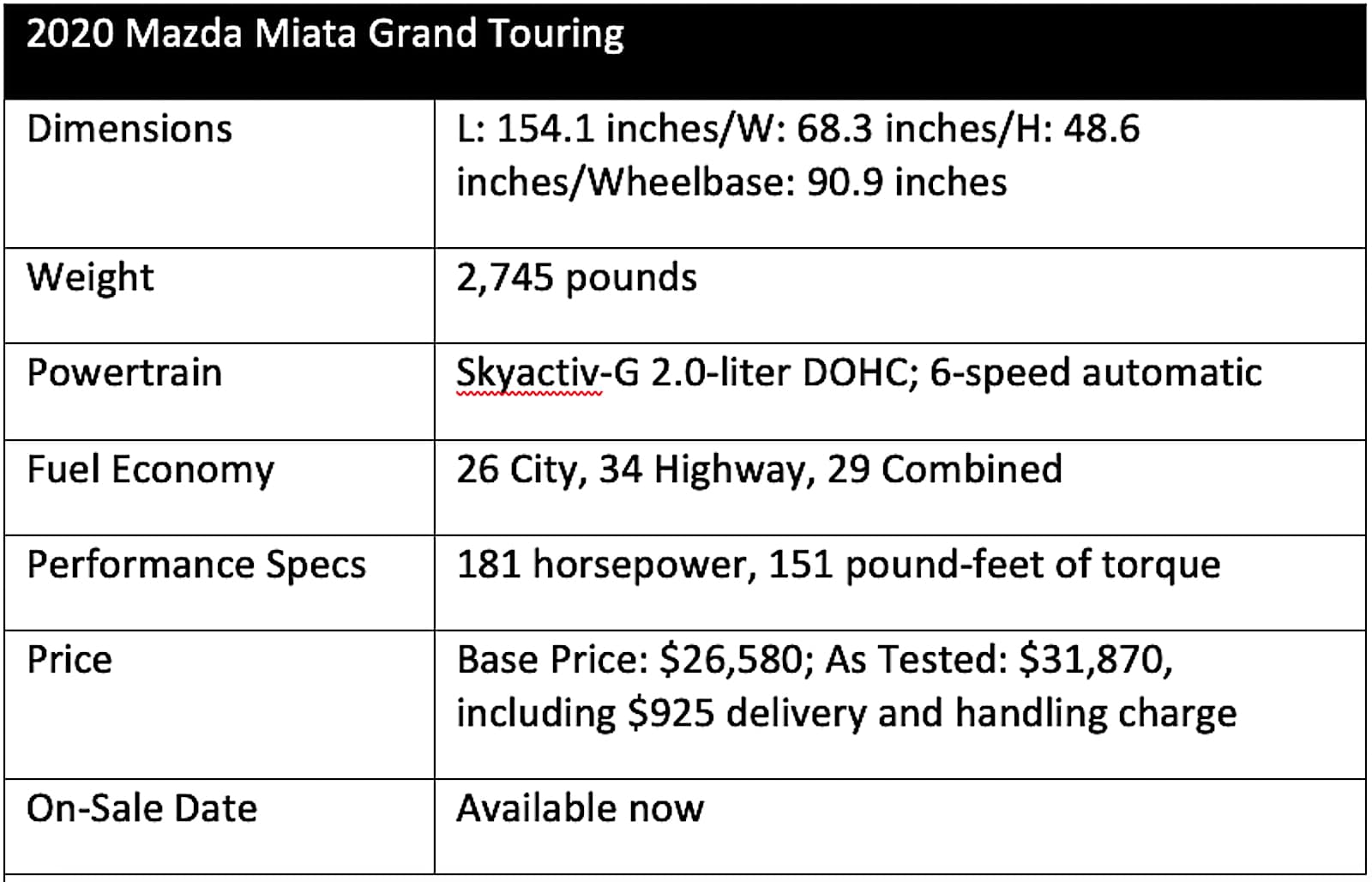 Wrap Up: In an age of SUVs, the 2020 Mazda MX-5 Miata clearly isn’t for everyone. But for those who want the emphasis on sport, rather than utility, this roadster is worth checking out. Timeless is a word that clearly applies here.

And, if anything, we find the Miata has actually gotten better with age – something we can’t claim for ourselves. There are some drawbacks, starting with interior space. But given the chance to pick whatever car we might want to drive over a weekend, the Miata is always one of our top choices. 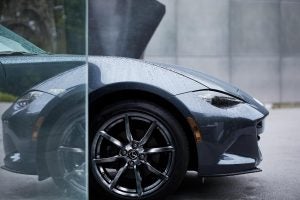 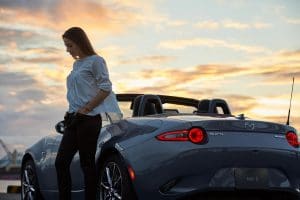 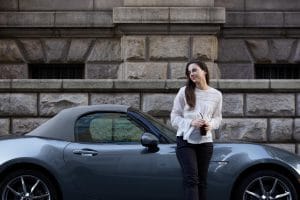 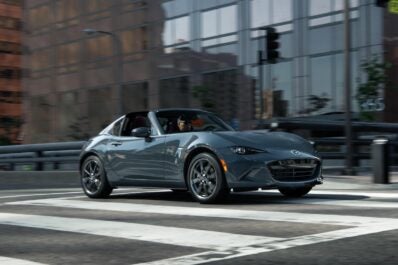 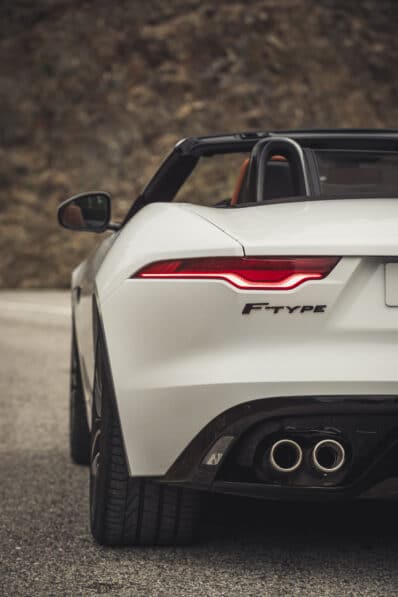 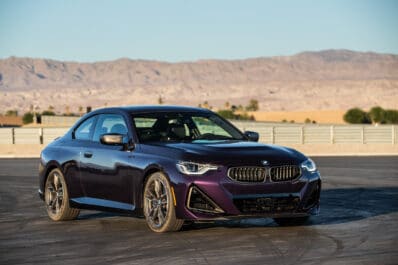