A Week With: 2020 Hyundai Ioniq Hybrid

Mix of style and performance the makes you want a hybrid.

Small cars are the industry’s forgotten segment right now, but a large chunk of buyers still gravitate to them. The Ioniq is Hyundai’s eco-friendly sub brand, emerging as one of the of nameplates that is drawing attention.

The compact hybrid is specifically designed to attract buyers looking to reduce the impact their driving could have on the planet — and who might have gone to the Toyota Prius in the past.

Overview: The 2020 Ioniq Hybrid is relatively small, more like a traditional subcompact when you measure the wheelbase. Adding to its appeal is the fact that it can go a long, long way – 55 miles according to its rating from the Environmental Protection Agency – on a single gallon of gasoline thanks to the vehicle’s very efficient hybrid powertrain.

It also is equipped with the latest technology and is built around a well-appointed cabin and a nimble chassis that makes the car fun to drive.

Exterior: Designed to handle either a battery electric or hybrid powertrain, the Ioniq was designed with a sleek silhouette that yields what is described as a low, class-leading co-efficient of drag that helps reduce the amount of energy needed for forward momentum, boosting its range.

The end result is an attractive profile that looks oh-so contemporary when it’s sitting at the curb or a stop light. It is also designed as a hatchback for greater utility.

Adding to the look are LED lights and sharply designed wheels. There is also a sunroof on the Ioniq Hybrid that adds to the its sporty feel. The stainless-steel door sill also is a nice touch as are the folding mirrors, which are handy in tight urban spaces.

“… Hyundai has amplified the ergonomics with a clean, crisp, no-frills look that makes the controls easy to decipher …”

Interior: One of the Ioniq Hybrid’s strong points is the interior. From the standpoint of ergonomics, the interior of a small car is relatively easy since the essential controls, such as heating and cooling, are seemingly always within

The 10.25-inch screen in the center stack also fits neatly into the overall design scheme with its clean surfaces. The quality of the overall materials is very good, so the no-frills approach doesn’t look cheap, which throughout the years has been one of the most significant factors, I think, sinking the overall appeal of small cars.

The technology loaded into the Ioniq Hybrid, such as its connectivity features, also nicely integrates into the design of the car’s cabin. Visibility from the driver’s seat is good and the lighting scheme used in the cabin at night is unobtrusive.

Powertrain: The car is powered by a 1.6-liter, 4-cylinder engine with fuel injection and a permanent magnet synchronous electric motor, while power is distributed through a six-speed automatic transmission and a 240-volt lithium-ion battery.

It also is equipped with a start-stop function that is practically invisible to the driver, plus it offers three drive modes, including all electric for short runs to the library or the grocery store. The car also had ample punch for passing on the freeway.

The Ioniq Hybrid’s fuel economy is impressive. The combined EPA rating is 55 mpg, and I saw a reading of 56 mpg on a couple of short trips on the car’s built-in, fuel-economy gauge.

Safety and Technology: The version of the Ioniq Hybrid that I drove for one week had a full range of driver assistance features available on board, including forward-collision avoidance, high-beam assist to control the brightness of the headlights, driver attention alert to warn of drowsiness, lane-following assistance, blind-spot and rear cross-traffic alerts and a rear-view backup camera.

It is also equipped with smart cruise control as well as multiple airbags. The Ioniq Hybrid also comes with Apple CarPlay and Android Auto as well as Hyundai’s Blue Link system for connectivity and Bluetooth.

Driving Impressions: In the past, small cars coming from almost anywhere were engineered with cost savings in mind. The driving experience was less than impressive and cars with hybrid powertrains seemed to have unique problems designed into them.

The Ioniq Hybrid, however, delivered a quality ride. The transmission never seemed to miss a beat, delivering smooth shifts and handling with crisp steering and excellent stopping power from four-wheel disc brakes. 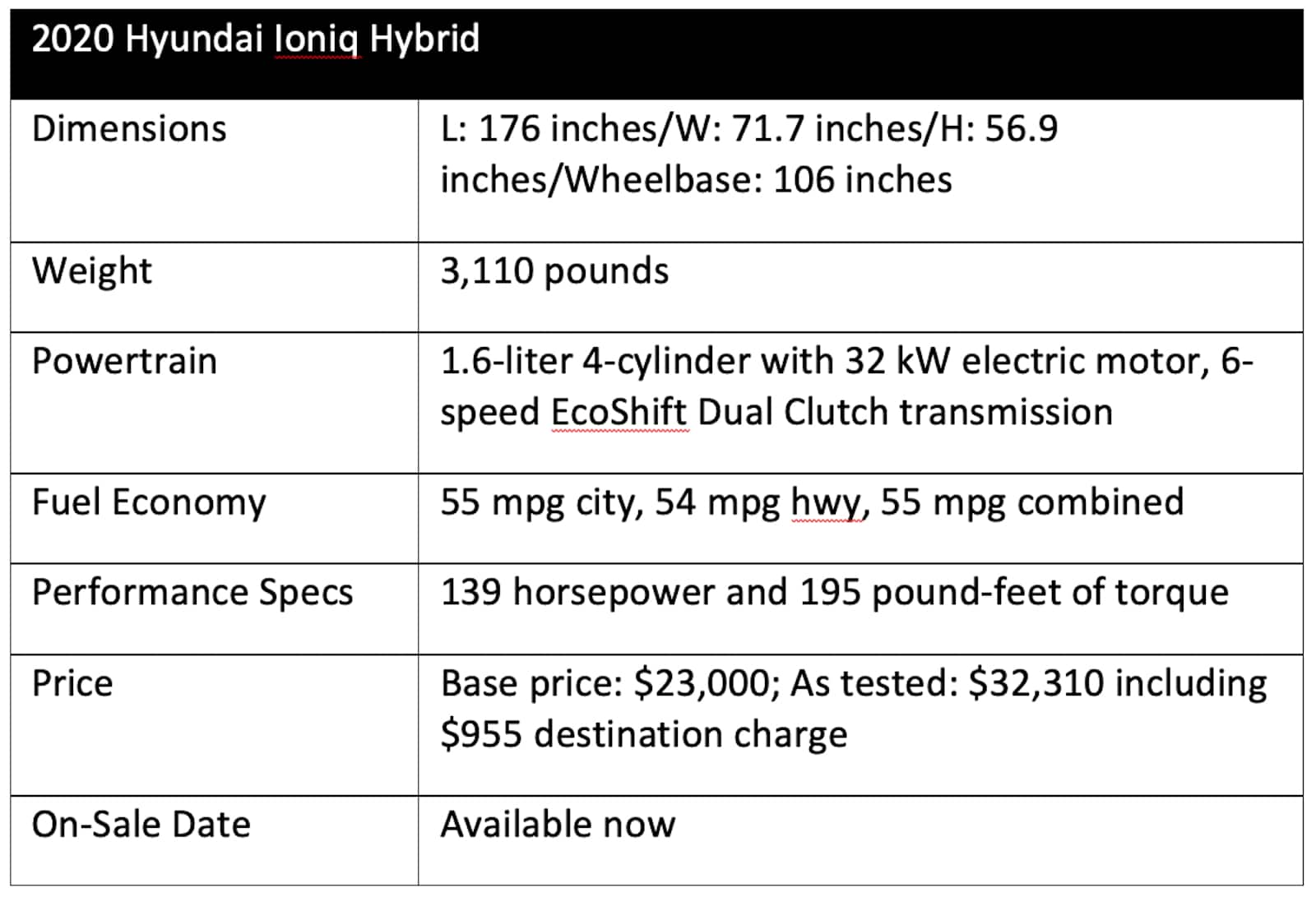 The car stayed flat through tight curves without any kind of lean or sideways slip, which is a tribute to the car’s overall balance and suspension. The cabin isn’t the quietest interior on the road, but the radio didn’t have to go all the way to loud to hear the music.

Wrap Up: The version of the 2020 Ioniq Hybrid that I drove loaded with all the bells and whistles carried a manufacturer suggested retail price of $32,310, including a $955 destination charge.

I am sure anyone who has been out of the market for any length of time and looking for affordable transportation will suffer from a serious case of sticker shock. But the MSRP is still well short of the average price for a new vehicle sold in the U.S. and it represents a good value in terms of equipment found on the vehicle and overall operating costs, which generally are low for hybrids. 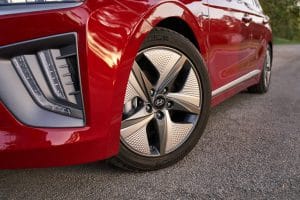 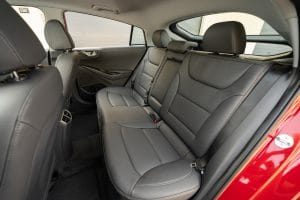