This plug-in can handle daily tasks and longer drives in style.

The BMW X3 compact crossover has been one of the brand’s most popular vehicles in the United States in recent years because it offers a hard-to-beat combination of prestige, sportiness and versatility. It’s done all of this in an highly competitive landscape as luxury crossovers are among the fastest growing segments in the industry.

Overview: Now BMW has electrified the X3 by transforming it into a plug-in-utility vehicle that – if you keep it charged – can run on electricity all week. Then, you can take it for a longer cruise or weekend trip, using power from the 4-cylinder gasoline engine.

The packaging of the 2020 BMW X3 xDrive30e is familiar, boasting  more than enough comfort and features for it to maintain its status as a luxury vehicle. It also has some of the latest safety and connectivity features in one accessible package that seems to unite, with relatively little effort, both BMW’s storied past with an environmentally friendly future.

Exterior: There is no disguising the 2020 BMW X3 is designed the basic exterior proportions of a boxy utility vehicle. But BMW’s designers have tried to dress it up a bit by giving the vehicle a slightly longer hood to give it more of the feel of a sedan and brought roofline down in the rear quarter to give the vehicle a sportier profile that is carried over into the liftgate at the rear.

The X3’s silhouette sitting at a curb or stoplight is rather elegant for a utility vehicle. The front fascia on the vehicles is designed with signature BMW grille and LED headlights and the four corners of the vehicle are enhanced by the 19-inch wheels and 20-inch wheels are available. The roof rails and eight inches of ground clearance re-enforce the vehicles utility.

Interior: The cabin of the BMW X3 is quite spacious for a compact vehicle, comfortably furnished within BMW’s traditional austere aesthetic framework that has attracted buyers for years. The leather-wrapped steering wheel, brightwork and wood trim fit nicely into the overall design scheme, which includes a long dashboard, a function-oriented center stack for carrying the infotainment screen, cupholders and storage that are expected in a modern vehicle in the 21st century.

The headliner around the panoramic sunroof, inner door panels and ambient lighting that spills into the parking

area in the dark also help foster the sense of genuine luxury that is BMW’s stock and trade. The visibility from the driver’s seat is excellent and ingress and egress from the vehicle’s rear seat, often compromised in vehicles with a similar short wheelbase, is particularly good and space under the rear hatch is also relatively generous and capable of carrying plenty of luggage and or sports gear.

Powertrain: It comes equipped with a hybrid powertrain built around 2.0-liter, 4-cylinder BMW TwinPower Turbo engine developing 181 horsepower and an electric traction motor, mounted within the 8-speed transmission housing, producing an additional 107 horsepower. The net power output is 288 hp and 310 lb.-ft. of torque.

The lithium-ion battery module located underneath the rear seats provides the storage capacity for electric-only and hybrid-mode driving. According to BMW, the X3 xDrive30e can operate at speeds up to 68 mph on electric power alone. The battery only range is 18 miles, BMW specifications note. The vehicles also were equipped with BMW all-wheel-drive system, which is incorporated into the driveline,

Technology and Safety: The X3 I drove was equipped with BMW’s standard pedestrian safety features which includes a warning when operating in electric-only mode at speeds of up to 20 mph. Also standard are Daytime Pedestrian Detection and Frontal-Collision Warning with City Collision. It also was equipped with a Driving Assistance Package with lane departure warning and blind spot detection systems and rear cross-traffic alert. Active Cruise Control with Stop & Go, Traffic Jam Assistant also is available on the X3 eDrive30e.

Driving Impressions: The BMW X3 xDrive30e was fun to drive. I used it for a couple of short errands on electric power only, and it was as quiet as an all-electric vehicle and it also did well on the freeway kicking out more than enough power to keep up with traffic and pass other vehicles.

The suspension was nicely tuned and quite capable of easing the ride on all kinds of pavement, including a long stretch of gravel road. It also did well on a morning that was full of snow and sleet as the all-wheel-drive system kicked into help with the road conditions. The variable power steering also offering a nice balance of assistance and feedback. I also was impressed with the integration of 2.0-liter gasoline engine with the electric motor. The shifts by and large were practically invisible even on the hilly portion of one of the test routes that I use. 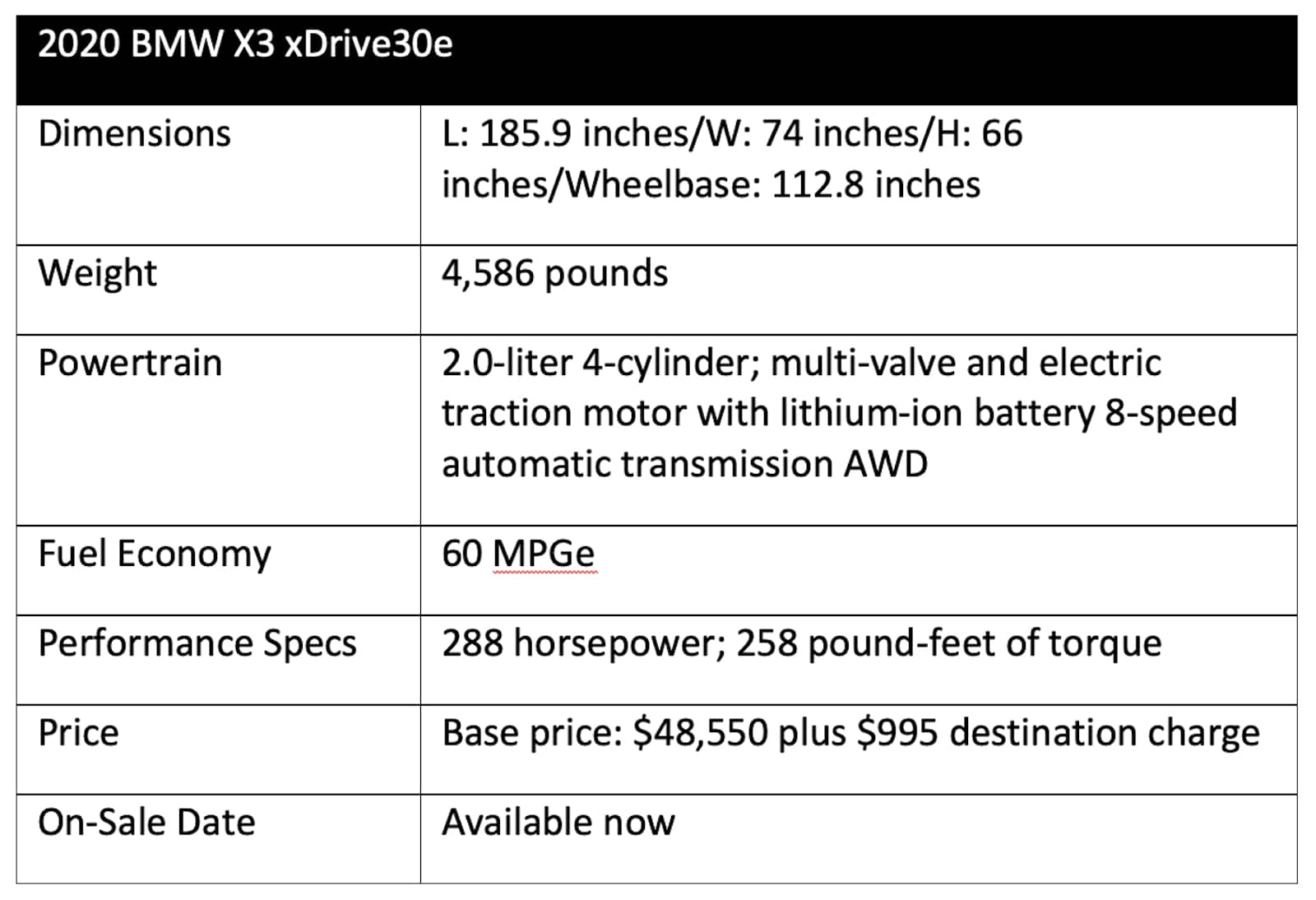 Wrap Up: Plug-in hybrid vehicles are perhaps the most complicated vehicles built by automakers today. They also may be the most underrated and seem fated to be given short end of the stick by regulators in California, Western Europe and China who appear to have a decided preference for pure battery-electric vehicles. The name PHEV does not help, as marketing executives privately admit, because it sounds like put to help something you use to clean out a clogged drain.

But a week with BMW X3 xDrive30e convinced me that they are very clever vehicle that could fit nicely into the lives of suburban and urban drivers. If you have a short commute on surface streets you can probably run-on electricity all week and then switch to gasoline for a longer drive on weekends.