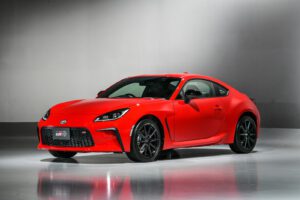 Toyota rolled out the latest edition of its small sports car, the GR 86, that it builds with Subaru.

Toyota Gazoo Racing and Subaru Corp. revealed the redesigned 2022 Toyota GR 86 early Monday in Toyota City, Japan. The GR 86 is the third member of Toyota’s GR line-up, which includes the GR Supra and GR and Yaris.

As before, the new model was developed in conjunction with Subaru, sharing its rear-wheel-drive platform and horizontally opposed engine with the 2022 Subaru BRZ. The new model goes on sale in the fall.

Dimensions are almost identical to the previous model, and Toyota says the new GR 86’s body rigidity has been improved, boasting 50% greater torsional rigidity compared to the previous model. Aluminum is employed for the roof panels, fenders, mufflers and root seats an effort to lower the vehicle’s center-of-gravity as much as possible. 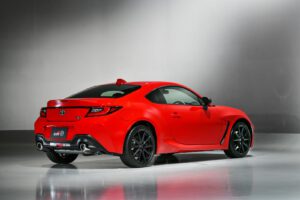 The new GR 86 joins the Supra and Yaris as the third member of the GR line-up.

Now-standard Vehicle Stability Control provides five levels of traction control, for those who venture onto the track. It allows the driver greater control before traction control systems kick in.

Given its place in the market, suspension is not exotic, although it is fully independent. Up front, you’ll find MacPherson struts, lower L-arms, coil springs and a stabilizer bar up front to keep weight down, although overall weight has increased by 23 pounds.

In the rear, there’s a double wishbone suspension with coil springs and a stabilizer bar. A limited-slip rear differential and 215/40 R18-inch tires come standard.

Toyota says the larger powerplant furnishes a 0-62 mph time of 6.3 seconds, more than 1 second quicker than 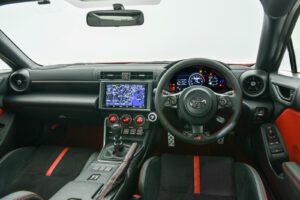 The GR 86 boasts an instrument panel featuring a 7-inch TFT instrument cluster with a large tachometer, a digital speed readout and a customizable gauge.

Although Toyota claims it has attempted to give the GR 86 greater differentiation from its cousin, visually, most of the car’s shape remains identical to the BRZ. There is some variation in front and rear fascias, as well as GR 86’s specific grilles and body trim, which includes unique air outlets, side sill spoilers, and other aerodynamic components, many developed from motorsports.

Inside, the BRZ and GR 86 look identical, with 2+2 seating and an instrument panel featuring a 7-inch TFT instrument cluster that’s dominated by a large tachometer, a digital speed readout and a customizable gauge that displays amps, water temperature or a g-meter.

At the center of the instrument panel is an 8-inch infotainment touch screen, with three rotary climate controls beneath it. Metal-accented pedals complete the interior trim.

Toyota and Subaru were intent on maintaining a seating position, with deeply contoured bucket seats. 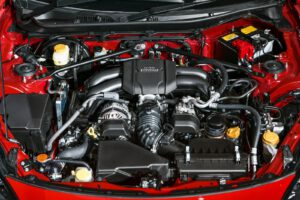 Look for the 2022 Toyota GR 86 to arrive sometime after the Subaru. Pricing was not announced, but the previous model started at $28,015 including a $955 destination charge.