GM's response is little changed, planning to move ahead with meetings.

The debate about General Motors’ ad spending with Black-owned media is heating up, music and fashion mogul Sean “Diddy” Combs the latest to speak out against the automaker.

In a statement titled, “WE DEMAND MORE: A LETTER FROM SEAN COMBS,” the 51-year-old artist and entrepreneur weighed in on a debate kicked off two weeks ago. Seven of the nation’s leading Black media owners accused GM and CEO Mary Barra of “systemic racism” in a full-page ad in the Detroit Free Press. But Combs takes things a step further, suggesting a black boycott of the automaker could follow if it doesn’t move to spend more with Black-owned media.

“Exposing GM’s historic refusal to fairly invest in Black-owned media is not an assassination of character, it’s exposing the way GM and many other advertisers have always treated us,” Combs wrote. “No longer can Corporate America manipulate our community into believing that incremental progress is acceptable action.” 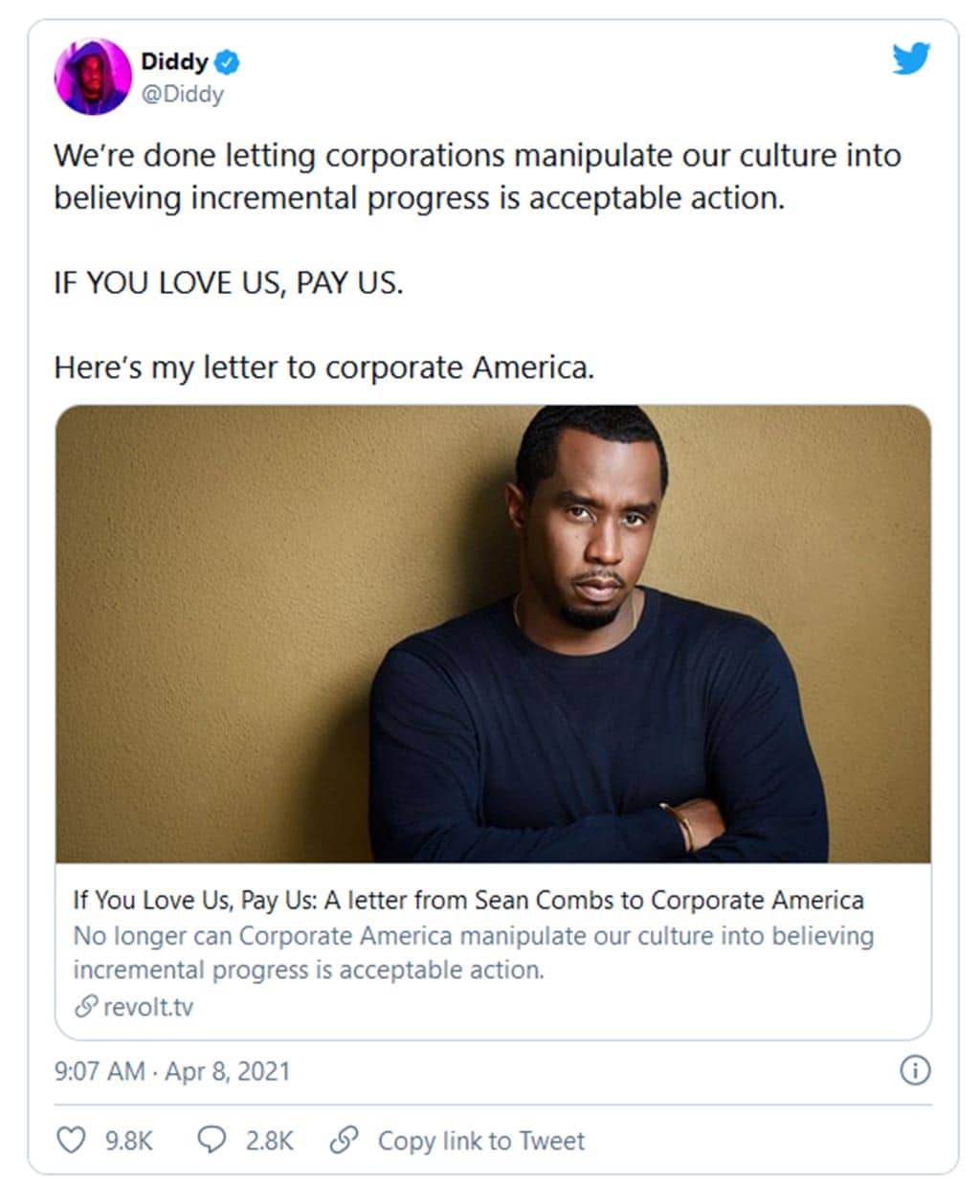 The issue of ad spending by General Motors — and other automakers — has been simmering for years. It exploded into public view late last month with the publication of the full-page ad signed by Byron Allen, owner of the Weather Channel and other media properties, Ebony publisher Junior Bridgeman, rapper and media entrepreneur Ice Cube and four others.

The letter claimed GM spends only 0.5% of its estimated $3 billion ad budget with Black-owned media, asserting that is the result of “systemic racism.” But it took things further by directly targeting Chairman and CEO Mary Barra who has said that the automaker “aspires to be the most inclusive company in the world.”

“You stand on stage, after the death of George Floyd, saying, ‘Black Lives Matter,’ when you have refused to acknowledge us,” the ad said of Barra. “The very definition of systemic racism is when you are ignored, excluded and you don’t have true economic inclusion.”

GM responded, noting the full-page ad contained “factual inaccuracies and character assault,” among other things claiming that 2% of its current ad budget goes to Black-owned media. At the same time, a statement from GM said that it “spends significantly less than $3 billion annually on advertising.”

Within days, the automaker did schedule a meeting with the seven signatories. But the meeting was canceled after they ran the ad again in several more publications, including the Washington Post and the Black-owned Detroit newspaper, the Michigan Chronicle.

Instead, spokesman Pat Morrissey told TheDetroitBureau.com, GM was scheduling a series of meetings with a broad range of Black-media executives, including Benjamin Chavis, CEO of the National Newspaper Publishers Association, the largest Black-owned media trade group in the U.S.

For his part, Combs said it is GM that has made inaccurate statements in its response to the controversy.

Exactly what it would take to resolve the controversy is uncertain. The automaker on April 1 said it would increase ad spending with black-owned media to 8% annually — which several industry sources said on background would come to as much as $180 million annually.

Allen said in an interview his group was seeking a $200 million annual base, to increase by 5% annually.

Combs appears to be seeking even more. “If the Black community represents 15% of your revenue, Black-owned media should receive at least 15% of the advertising spend,” he said in his letter, adding that. “The same way you understand the power of our dollars, we understand our power to take them away from any corporation that doesn’t give us the economic inclusion we deserve. We are prepared to weaponize our dollars.”

While Combs did not specifically use the word, “boycott,” he added in a tweet, “If you love us, pay us!”

Combs himself took some criticism in a torrent of tweets, including one from artist Jessica Fyre, who claimed she was recently asked to host a new show on the Revolt network “without pay.”

But the call for more respect for Black-owned media from the business community has largely generated strong support.

Asked for comment on the Combs letter, GM spokesman Pat Morrissey said in an e-mail that, “Our response is similar to what we provided last week.” He pointed to the series of meetings planned with Black-owned media executives and the commitment to quadruple current ad spending.

“Our commitment goes beyond advertising and sponsorship revenue,” said a GM statement. “We want to build long-standing partnerships with Black-owned and diverse media companies in a transparent and meaningful way. This includes investments in business enablers such as customized deal structures and facilitating access to measurement and mentorship tools, which are often a barrier for small and emerging businesses.”

The automaker also plans to launch “Diverse Owned Media Upfront” in May, a process “dedicated” to working with minority “partners and potential partners.”