General Motors and its partner LG Chem will invest $2.3 billion to set up their second battery plant in Spring Hill, Tennessee, alongside what is to become one of four GM EV plants.

The new factory will be operated as part of the Ultium Cell LLC joint venture set up by GM and LG’s Energy Solutions subsidiary. Along with the battery factory set to open in Lordstown, Ohio this year, Ultium will have the ability to produce 70 gigawatt-hours of lithium-ion batteries annually, officials noted. That is twice the capacity of the Tesla Gigafactory in Reno, Nevada, currently the country’s largest lithium battery plant.

“At General Motors, we want to put everyone in an EV, and we have the technology, the manufacturing expertise and, should I say, the partnerships, along with the global scale to do this,” said GM Chairman and CEO Mary Barra.

A total of 1,300 jobs will be created at the facility, which will come online in late 2023, according to Barra, who spoke at a ceremony in Nashville on Friday morning.

No longer the company environmentalists love to hate

Once scorned by environmentalists as the company many claimed “killed” the electric vehicle, GM has rapidly shifted directions during the last few years. It introduced its first long-range battery-electric vehicle, the Chevrolet Bolt EV, in 2016. GM announced plans late last year it will up its investment in EVs to $27 billion by 2025 — that includes $7 billion to be spent this year alone, Barra said Friday.

The automaker expects to have at least 30 all-electric models in production by then. It currently is readying the launch of an updated Bolt EV, with the extended Chevy Bolt EUV to reach showrooms this summer.

Later this year, it will add the all-electric GMC Hummer pickup, with a Hummer SUV to follow in 2023. Cadillac will launch its first BEV, the Lyriq in 2022 — the production version set to be revealed next week.

To support that plan it now has announced four battery-electric vehicle assembly lines in North America. The two Bolt models are being produced in the Orion Township plant, north of Detroit. The Hummers will roll out of the recently renamed Factory Zero in the Motor City. A facility in Ontario will produce battery vans for GM’s new BrightDrop subsidiary.

The Cadillac Lyriq will roll out of the GM plan in Spring Hill, Tennessee that first opened three decades ago to produce vehicles for the then-groundbreaking Saturn division. That factory underwent a number of transitions throughout the decades and was nearly shuttered when GM emerged from bankruptcy in 2009. It is now being converted to build EVs. 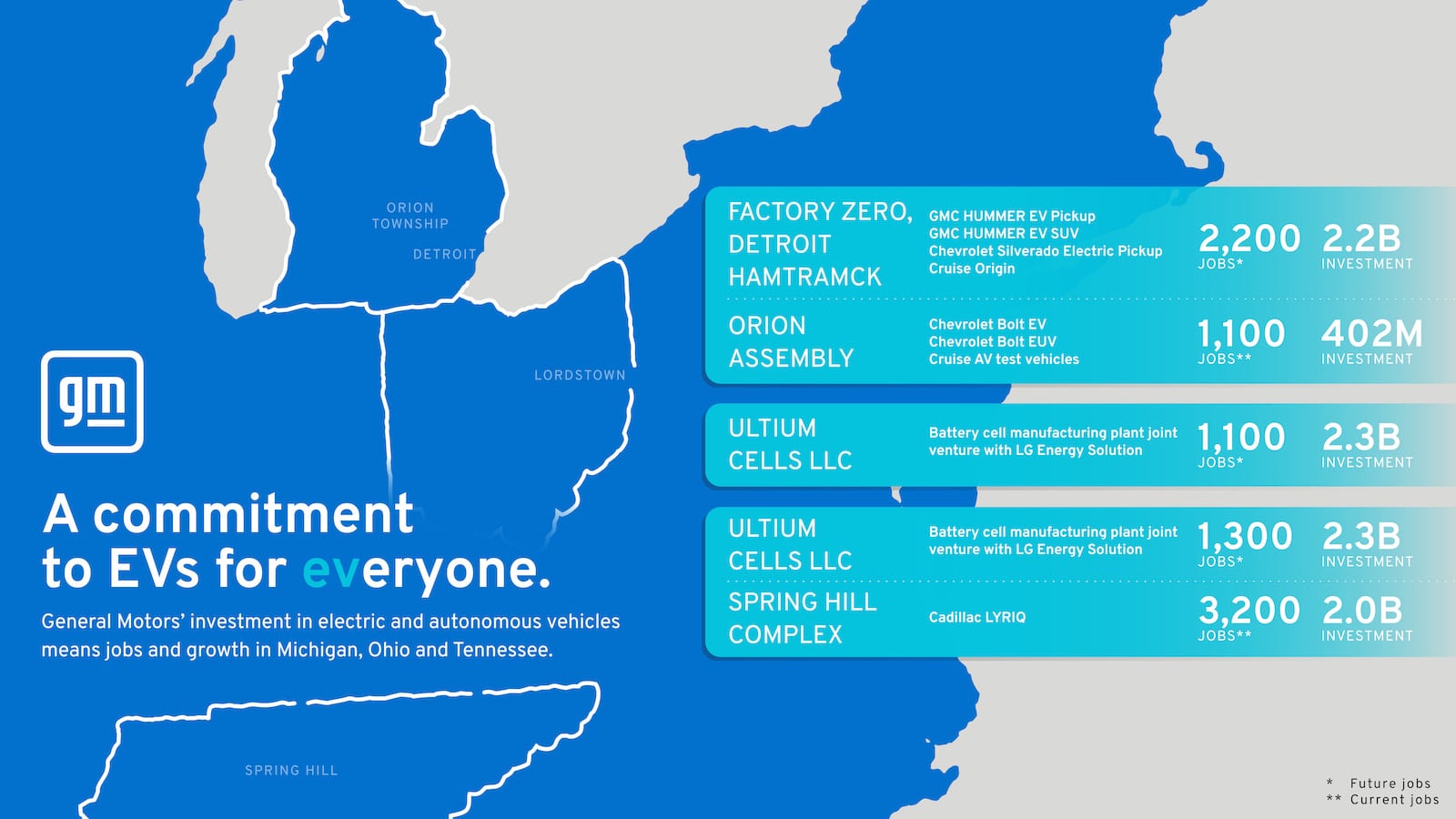 The second Ultium plant will sit adjacent to the Spring Hill assembly plant and provide all the necessary batteries. It is expected to serve other GM assembly plants as the automaker continues its transition to an EV-only manufacturer.

Beating Tesla at its own game?

“Once construction is complete and our new facility is fully operational our U.S. plans will accommodate the world’s largest production capacity,” said Jonghyun Kim, CEO of LG Energy Solutions. “Our 70 gigawatt-hours (will be) two times the capacity of the (Tesla) Gigafactory in Reno, Nevada.”

The two plants GM and LG have so far announced will produce the new Ultium batteries that, officials claim, will have significantly higher energy density — the amount of power they can store — than the cells General Motors currently uses. They also target a sharp reduction in cost, to around $100 per kilowatt-hour, partly by reducing the use of cobalt.

The longer-term goal is to get down to $70 or less, a point at which BEVs are expected to reach cost parity with conventional gas-powered vehicles, according to the Boston Consulting Group and other analysts.