A little truck with a big role to play.

It’s been six years since the Hyundai Santa Cruz concept made its debut at the 2015 North American International Auto Show — but the compact pickup will finally make its debut on April 15.

Hyundai offered up an assortment of new images and a short video featuring Brad Arno, the design director heading up the Santa Cruz program, a week ahead of the formal launch.

“We started designing the Santa Cruz with the concept that this is not a traditional truck,” said Arno, who works out of the automaker’s design studio in California. “It’s something new. It’s meant to thrive in dense urban environments and the open outdoors.”

The latest teaser leaves plenty of questions unanswered. One of the biggest concerns? The unique bed extender shown on the original Santa Cruz concept. That would significantly expand not only the pickup’s cargo capacity but also the range of potential buyers the truck might appeal to, according to industry analysts.

An earlier release suggested an extender is likely to be part of the production model. The automaker highlighted “a flexible open bed for gear, cutting-edge connectivity and a highly maneuverable all-wheel drive platform that is equally at home in urban and adventure-focused environments.”

Santa Cruz should offer a more flexible tailgate than the typical midsize pickup, opting for a multifunction design that could swing open, as well as fold down

What we now know is that the automaker steered clear of the classic body-on-frame platform. The 2022 Hyundai will follow the path blazed by the Honda Ridgeline, riding on a crossover architecture shared with models like the Kona and Venue.

That suggests the Santa Cruz also will share engines with those CUVs. There appear to be two clear options:

The Kona’s drivetrain would seem to have an edge, at least for any version of the Santa Cruz marketed as a work truck because of its higher cargo and tow capacity.

Hyundai officials have also hinted that they’re working up a range of electrified options for their entire fleet. It would surprise almost no one if a hybrid version of the new pickup was in development, though it might not be available at launch.

The remaining question is pricing. Smaller than today’s midsize models, the 2022 Hyundai Santa Cruz would also need to carry a more compact entry price than the likes of the Ford Ranger — which comes in at a base $24,820.

Production starts this summer at Hyundai’s big assembly plant in Montgomery, Alabama, with the first of the pickups reaching U.S. showrooms sometime in autumn. 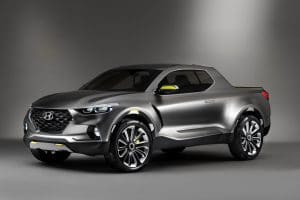 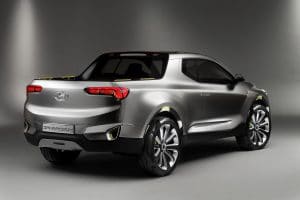