On the right track. 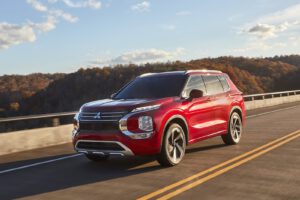 The 2022 Mitsubishi Outlander gets an exterior update, giving it a distinctive new look.

When the Mitsubishi Outlander made its original appearance two decades ago it was a bit of an oddity for an automaker focused on small, sporty sedans and coupes. In today’s crossover-crazed market, it’s the Japanese brand’s flagship.

The 2022 Mitsubishi Outlander received an unusual introduction, the first new vehicle ever to be launched via the Amazon Live service. Considering Mitsubishi’s desperate need to gain visibility in a market crowded with better-known competitors, it appears to have done an effective job at drawing attention to the new SUV.

Loosely modeled after the oddly named Engelberg Tourer concept Mitsubishi previewed at the Geneva Motor Show two years ago, the 2022 Outlander has gone through a complete makeover. That starts with a new styling language the automaker dubs “Dynamic Shield.” The exterior is meant to underscore the Outlander’s ruggedness. And the cabin offers a more luxurious feel than you might expect from a compact SUV starting at just $26,990.

There are lots of new technologies, improved performance and an increased assortment of advanced safety systems. 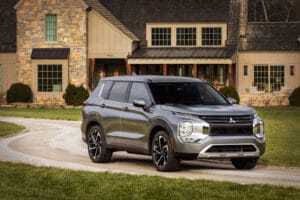 The new Outlander gets some high-end touches for the 2022 model year like 20-inch wheels.

The overall design of the 2022 Mitsubishi Outlander was based on a concept called “I-Fu-Do-Do,” which means authentic and majestic in Japanese. The look of the exterior adopts a new styling language the automaker dubs “Dynamic Shield.” Up front, it features a more upright nose with a pinched, dual-level grille and stacked headlamps.

In contrast to the steeply raked Mitsubishi Eclipse Cross — which gets a major, midcycle update for 2022 — the look of the all-new Outlander is much more traditional. The three-crossbar grille stands tall, and the greenhouse, with its “floating roof,” is boxier than its coupe-like sibling.

The back end adopts what Mitsubishi calls a “hexagon motif,” designed to resemble classic body-on-frame SUVs of the past, implying both stability and robustness, with T-shaped taillights emphasizing the crossover’s width.

The new SUV is larger in virtually all dimensions, the width growing by 2 inches. That means the cabin of the 2022 Outlander is both wider and more spacious than the outgoing model, Mitsubishi adopting more upscale materials and features like tri-zone climate controls, real aluminum panels and a 12.3-inch touchscreen infotainment display.

The 2022 Mitsubishi Outlander also is one of the rare three-row offerings in its segment. Just don’t expect adults to sit in the penalty box back seats for very long. 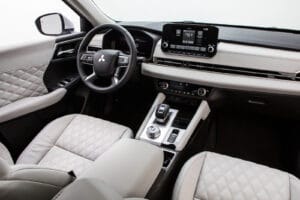 The Outlander’s interior features a 12.3-inch gauge cluster and a 9-inch touchscreen.

Where two powertrains were offered on the outgoing model, the 2022 Outlander is powered by a 2.5-liter inline-4 that bumps up power by 8.9%. At the same time, it reduces fuel consumption by 2.6%, according to the automaker.

The engine is paired with a new 8-speed automatic that, for the first time for Mitsubishi, adopts a shift-by-wire system, rather than conventional, mechanical linkage. In turn, the available Super All-Wheel Control 4WD system gives the Outlander reasonable capabilities for handling snowy highways and moderate off-road conditions.

Drivers can adjust a broad range of vehicle settings with a single turn of the SUV’s mode selector with settings that include Mud, Snow, Gravel and Tarmac.

Expect to see Mitsubishi relaunch the plug-in hybrid Outlander currently available in the near future. It will deliver both greater performance and better mileage, but specifics details have yet to be finalized. Speculation is that the 2.0-liter gas engine side of the PHEV will be upgraded from 2.0 to 2.4 liters 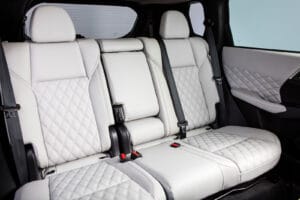 As you’d expect of a flagship model, there’s plenty of new technology, starting with an 8-inch touchscreen for the base Outlander, with higher trim models upgraded to a 9-inch screen. The system has features like Apple CarPlay and Android Auto, a 10-speaker Bose audio system, wireless Qi smartphone charging and both standard and new USB-C charging ports.

The seven-seat Outlander adds a variety of new Advanced Driver Assistance features, including Adaptive Cruise Control, Traffic Sign Recognition, Lane Keeping Assist and MI-Pilot Assist, the latter system helping drivers cope with a variety of different roadway conditions. In heavy traffic it can stop and then pause for up to 30 seconds before starting up again.

For those who tow or travel off-road, there’s also Hill Descent Control and Trailer Stability Assist. A multiview camera system helps drivers see what’s around the vehicle, whether on-road or off. 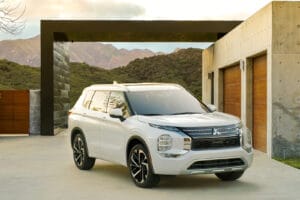 The 2022 Mitsubishi Outlander is being positioned as a family hauler.

The added width of the new Outlander gives it a more planted look. It carries over to the SUV’s on-road manners. In back-to-back drives through the appropriately named Hell, Michigan, Outlander couldn’t take high-speed corners quite as quickly as the updated 2022 Mitsubishi Eclipse Cross. That’s not what it’s designed for. Overall, however, it boasts a sense of confident road manners.

Equally impressive was the comfort level it provided even after spending close to four hours behind the wheel, both wandering down dirt roads and racing along interstate highways.

I hope to get a chance to take the new Outlander on some off-road trails when I have a full week to drive it.

The design of the 2022 Mitsubishi Outlander, especially the distinctive front end, isn’t for everyone. But it’s a big improvement compared with the outgoing model. The interior, meanwhile, is both roomy and far more luxurious than one might expect in its price class.

There’s a reasonable amount of technology onboard. And, while the engine could use a bit more power, it’s more than adequate for what most buyers would expect. For those who like the basic design but want still more power — or better mileage — hang tight and wait for the next-generation Outlander Hybrid.

The Japanese automaker is in the midst of completely refreshing its line-up. If the 2022 Mitsubishi Outlander is any indication of what’s coming, it’s on the right track.