Flamboyant, exaggerated and extreme, design not for the faint of heart. 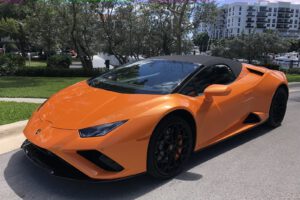 Flamboyant, exaggerated and extreme, the Huracán is a feast of spoilers, grilles and odd-angled planes.

For 2021, the Lamborghini Huracán EVO is first Lamborghini to receive Lamborghini Connect, a suite of connected services that includes a car-finder function, vehicle status report and geofencing with remote speed and valet alerts, and Amazon Alexa functionality — something that could prove to be very convenient.

“Alexa, find the magistrate’s court” or “Alexa find roads without highway patrols.” Siri was never this prescient, despite its presence on the Lambo’s Apple CarPlay functionality. Then again, Siri can’t even tell you a funny joke, so what good is it? I want technology with a sense of humor – like Microsoft Windows.

That said, despite the excellence of the standard tech package in the 2021 Lamborghini Huracán EVO RWD Spyder, it’s far from the reason you’d buy one. There’s only one reason: the need for speed and otherworldly handling agility. And that’s exactly what you get. 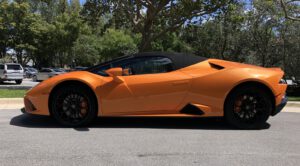 Its design is not for the faint of heart, despite a hint of refinement compared to Lambos of old.

In the land of the raging bull, the Huracán is the least expensive sports car you can buy, with the Spyder commanding a price premium large enough to spring for a mundane compact sedan. Still, it’s far less expensive than the Aventador, which starts at more than $400K. But I am not sure that it’s any less fun.

Our test car, the EVO RWD Spyder, was thoughtfully furnished by Lamborghini during The Palm Event, a luxury lifestyle affair that happens to include a car show. Held annually in Palm Beach, the test car’s orange paint seemed the perfect companion for a weekend on the island. 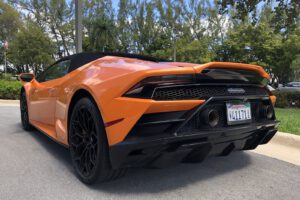 The EVO features a top that disappears under the rear hood in a mere 17 seconds and at speeds up to 31 mph.

Come on, you know what this looks like. Flamboyant, exaggerated and extreme, the Huracán is a feast of spoilers, grilles and odd-angled planes. Its design is not for the faint of heart, despite a hint of refinement compared to Lambos of old. Its skin is a mix of aluminum and composites, and features a top that disappears under the rear hood in a mere 17 seconds and at speeds up to 31 mph. Wind management is excellent — even when you’re going taking full advantage of the available speed.

You wouldn’t expect much in the way of practicality. Aside from the glove box and two shallow map pockets, there’s no interior storage. And the front trunk’s 3.5 cubic feet ensures you won’t pack much for that weekend getaway – aside from perhaps a toothbrush and condoms.

Controls are not where you’d expect them. Like Ferrari, Lamborghini places its turn signal control on the steering column. Ergonomically, it makes sense; your thumbs rests on it naturally. But it’s unusual, as are the placement of the seat adjusters. They’re between your legs. But the esoteric placement lends this car a charm that seems lacking from the dreary standardization of ergonomics in lesser cars.

The padded carbon fiber shell seats are firm, hold you securely in place and are blessed with lot of support, making them comfortable for long stints in the saddle despite a driving position that’s classically Italian: knees bent, arms outstretched. 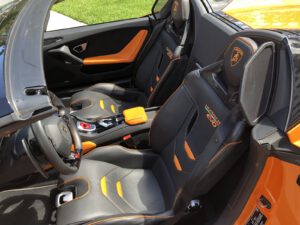 The padded carbon fiber shell seats are firm, hold you securely in place and are blessed with lot of support, making them comfortable for long stints.

Here’s where the party starts: under the hood. That’s where you’ll find a 5.2-liter V-10, manufactured in Neckarsulm, Germany, and shared with the Audi R8. Producing 610 horsepower through a 7-speed dual-clutch gearbox to the rear wheels, it’s mounted in a chassis made of aluminum and carbon fiber, and fitted with steel springs, hydraulic dampers, and an aluminum double-wishbone suspension.

“MagneRide” electromagnetic damper control is optional. Given all the lightweighting going on, at 3,300-plus pounds, it’s still fairly porky for a 178-inch long car. Of course, V-10s aren’t made of crepe paper.

You’ll be happy to know that the Huracán boasts such basic safety features as anti-lock brakes and stability control, which can be deactivated. And, aside from your partner riding shotgun, it also has airbags. Thankfully, it lacks the intrusive dross that poisons otherwise fun sports cars.

But it does offer an 8.4-inch vertical touchscreen that controls the audio system, climate control, Apple CarPlay, and Amazon Alexa integration. The controls can also be activated using voice control. This seems more like wishful thinking than reality given the sheer amount of noise constantly permeating the cabin. You can use the audio system, but you won’t hear it. The only soundtrack that matters emanates from under the hood, one that will drown out any second thoughts about buying something else. 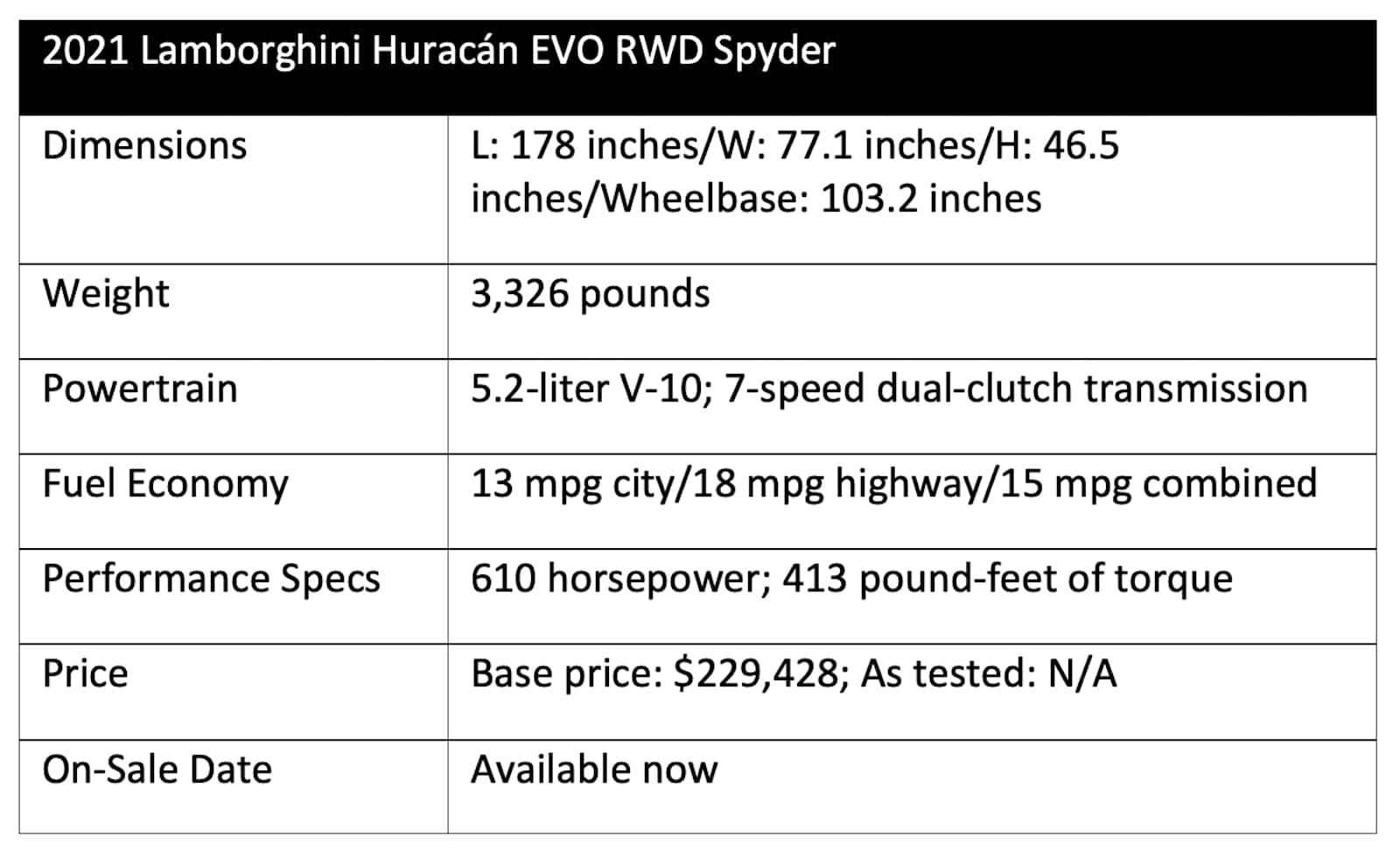 Absurdly fast, the Huracán isn’t as much a car as it is Y-chromosomes shod with Pirelli P Zeroes. Flip the steering-wheel-mounted paddle shifter and bury the throttle, and the Huracán’s full fury soon makes itself rousingly apparent: Bwah-Bwah-Bwah! Clamor consumes the cabin, an evil, ear-drum piercing soundtrack that taps your synapses and electrifies your soul. You are at one with the car and its razor-quick reflexes and whiplash-inducing thrust.

Of course, if the performance is a bit too mild for you ­— yeah, right — there’s a new drive mode selector dubbed the Performance Traction Control System, or P-TCS in Lambo lingo. It starts with the mildest mode, Strada, turning up the heat through Sport and on to Corsa, the race mode, meant for racetrack work.

Without access to one, I-95 in South Florida was the substitute. It’s a driving experience that’s much a video game — except that you only have one life. It proved up to the task, despite the road’s appalling condition. Being a sports car, its incredibly firm suspension always revealed what was going on beneath it without causing discomfort. It was quite impressive.

What can you say of this racecar tailored for street use, this raging bull that satisfies the soul as so few cars can? It’s a supercar, one deserving of the designation. Its charismatic swagger, quirky control layout, minimal practicality and maximum excitement make it one of the most entertaining cars you can buy. And that’s no bull. 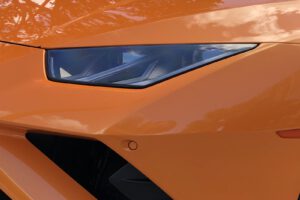 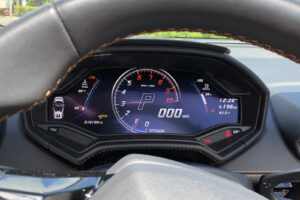 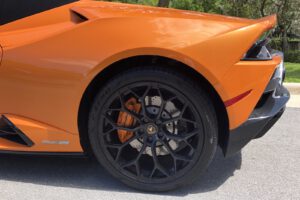